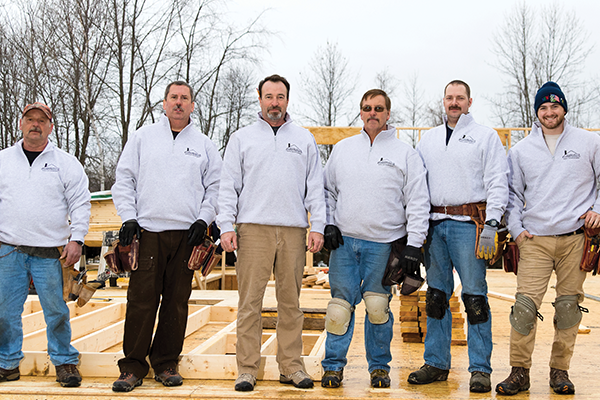 Eric Duquette has been in construction since he could swing a hammer and hop up into his dad’s truck. The proud son affectionately refers to his father as a “Murnaniac” because he worked for years as a superintendent for locally owned Murnane Construction. That’s where Eric got his start as well, but after a time he decided to go out on his own.

As Duquette Building and Remodeling, Eric and his crew have built some beautiful homes that feature cutting-edge technology. Duquette specializes in creating an automated home from the ground up. There are two main characteristics of home automation. The first is the ability to program and schedule events on devices or a network. The second is remote monitoring and access. The synergistic benefits to homeowners become exponential.

The trust that Duquette builds when constructing a home could rival the strength of the actual dwelling and that is a cornerstone for the builder. The company also ends up working as property managers for clients who use their homes seasonally and is happy to do it. “You spend so much time building a house, it’s almost like a kid. You never really want to let it go,” said Eric. “So managing the property for the homeowner works out great for both of us!”

Partners in Building a Dream

Duquette and his wife Heidi have been married for 30 years. Their fathers worked together and the two met as teenagers. Together they have built, lived in, and sold a more than a handful of homes—all the while growing their construction business.

But while that was taking place, Heidi had a dream of her own. The Orchard House in Peru is her dream, and who better to bring it to life than her partner, husband and best friend? In talking with the two of them, it didn’t take long to realize that this build was more than a labor of love. “I have been working my whole life for this, gathering experience through everything I’ve done since graduating from Paul Smith’s culinary program,” Heidi explained.

The Duquette duo has demonstrated an ability to roll their sleeves up and get right to work. They lean in even when it seems daunting and any celebration of their success is met with genuine humility. Both are emphatic in sharing that nothing happens without the support of the other and family. Eric is grateful for “the guys”—his crew that has been with him through thick and thin, most of them since the start. Heidi shared her success with Eric and the community that continues to welcome and support them.

As with any renovation project—especially a colonial home from the 1800s—the Orchard House restoration became a little bigger as they got into it. Originally, Heidi thought it could be done in six months. Eric was apprehensive about committing to that timeline, but they agreed that they would know more once they got started. The building and property had fallen into disrepair after years of neglect, but that didn’t deter Heidi. On her hands and knees stripping the original floors or on the roof spreading tar, she remained unwavering in her vision.

The one-day that challenged her was when they were rebuilding what is now the kitchen. The original foundation was stacked stone and over the years, some of the stones didn’t quite “stack up.” The result was a tilting kitchen—which no chef wants, and no builder will tolerate. The Duquettes stripped it down to the studs, shored it up, and poured a new foundation. While the foundation was curing, the room had no roof and pigeons found the area to be a welcome shelter. When Heidi turned the corner with her cup of morning coffee she almost burst into tears. Eric was there and was quick to reassure her. “It’s okay. This is the worst of it. From here it gets better. Every day it gets better,” he recalled saying. And he remained true to his word.

Cherishing the Privilege of Service

After 18 month of renovations, they opened, and the Orchard House has been offering private dining in Peru since July 2011. “This isn’t some empty nest project for me—it’s been a long time coming,” said

Heidi. “It’s what I’ve always wanted to do. I get to give people memories and I couldn’t be more grateful that it’s all come together.”

Since graduating from Paul Smith’s, Heidi has been active in the culinary community. She was one of the first women to work the line at the Ground Round when it opened, and she treasured her time working for

Bob Smith. “He had an event here and I was so nervous. But he was complimentary about the space and the food and that made me feel 10 feet tall!” said Heidi. “Working for him was a great inspiration for me,” she added.

While raising her family, Heidi continued to stay active in her field, gathering experience. From helping out at the CV-TEC Culinary program, to filling in when the director of Hospitality Management at SUNY Plattsburgh took maternity leave, to offering a hand in the kitchen at the American Legion, Heidi has never tired of serving in the industry. Every experience has developed a different aspect of her skills until she has become a culinary powerhouse.

The Orchard House is open exclusively for private events. It has two dining rooms and offers sit-down or buffet service depending on the size of the group. As facilitator of the events, Heidi is fully absorbed in making sure guests enjoy their experience. She supervises every detail—from decorations to menu and recipes. She treasures the honor of hosting every event that is held in this special space. “I love my life; I love my work. Sure, it’s hard, but I get to give people memories,” she said. “How awesome is that?”