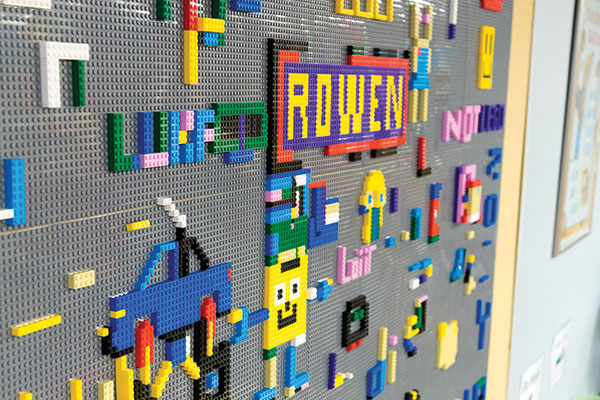 There’s a new wall in the Plattsburgh Public Library, and it’s made of LEGOs. The library installed the wall in March.

Plattsburgh Youth Services Librarian Ben Carman said the project was an effort to create a centerpiece for a more activity/maker-oriented youth space in the library. He added, “Thanks to a grant from the Plattsburgh Rotary Club, we were able to purchase large building tiles, adhesive, and 7,000 building bricks to convert an underused bulletin board to an interactive community activity station.”

The LEGO Wall is used by children (and adults) of all ages. “It’s truly a collaborative display that changes and evolves as patrons build on each other’s creations,” said Carman. While the library started a LEGO Club in the summer, he said the LEGO Wall has engaged many more library users as a “passive” program—a library element that allows young library-goers in particular to engage in self-guided and collaborative exploration and play on their own.

The library’s youth space also has numerous building sets, games, puzzles, and toys to encourage a variety of activity. “We’re not quite a makerspace (yet!),” said Carman, “but this represents a shift in thinking about how our community of youths and caregivers engage with our library.”

The Plattsburgh Public Library isn’t the first library to install a LEGO Wall; the idea originally came from the blog “Renovated Learning”: http://renovatedlearningcom/2014/09/12/the-epic-library-lego-wall-how-to-build- one. The Beekmantown Elementary School Library has one as well.