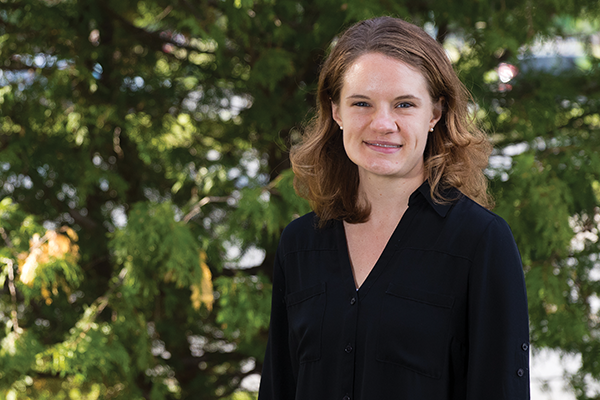 Caitrin Herdic Chiantia grew up in the North Country and graduated from Connecticut College where she earned a BA in Cell and Molecular Biology, summa cum laude. After graduation she came home to Champlain to spend the summer and then moved to Manhattan to attend SUNY College of Optometry. She rented an apartment in midtown east with two women she barely knew and embarked on what she calls the riskiest venture of her life. “But despite my concerns it was one of the best decisions I could have made,” she explained. “I jumped into city life as I simultaneously navigated optometry school. It opened my eyes to new experiences and new people and I learned so much — and not just about eyeballs — during my time in New York City.”

Caitrin earned her Doctor of Optometry in 2013 and began her career in Connecticut but the attraction of home never left her. After four years of successful practice she made the decision to return to the North Country where she joined Dr. Chuck Paepke in his practice at FirstView Eye Care in Plattsburgh.

Asked about her career goals Caitrin expressed her desire to learn more about how the brain and the visual system are intertwined. “I am especially interested in the neuro-visual system,” she emphasized. “Many health problems — such as strokes, diabetes and high blood pressure — manifest them- selves with vision problems. I would love to become an expert in the field of neuro-optometry.”

What are you doing to make a difference in your profession?

Health care is an ever-evolving field, and in the era of computerized health records and online patient portals, the personal touch is often lacking. I make an effort to listen to more than just my patients’ eye problems. I like to get to know them as people, because by knowing someone on a personal level, you can make better medical decisions.

I am a figure skating instructor for the North Country Skating Club in Rouses Point. Growing up, figure skating was incredibly important to me and shaped me as a person. Figure skating requires hard work, determination and a lot of self-discipline. I feel that by coaching young skaters, I can help kids today develop those skills.

For me, the most important characteristic for success has been compassion.

I measure my success by the smile on a kid’s face when he or she gets their first pair of glasses and realizes what it is like to see clearly, or in the hug from a patient who is so grateful for time we spent talking about her health concerns and answering all of her questions, or in the flowers from a patient thanking me for saving his vision, or in the newly found confidence of a teenager who tries (and loves) con- tact lenses after years of “coke bottle glasses.” It’s in the little things. How do you maintain a work/life balance?

Running helps me to clear my mind, especially after a long day of work. I run year-round outside. There is something about fresh air and nature that grounds me when I’m feeling stressed.

I’ve learned to take time for myself and not feel guilty about it. It’s important to take quiet time alone to recharge. I spend this time running, reading, hiking, or simply curled up with my cat and a cup of tea.

As a North Country native who returned to the area after living elsewhere for 12 years, I know that this area can be appealing to a younger generation. Personally, I love the access to outdoor recreation opportunities. In terms of improving the North Country’s appeal, I think it is important to promote our current small businesses and encourage new establishments like farm-to-table restaurants, small craft breweries and cafes.

What is something that no one would guess about you?

For several years, I attended a weekly boxing class which I loved. I even have my own set of boxing gloves.

Don’t fret the small stuff. You worry too much! Stay focused and true to yourself and you’ll be just fine.