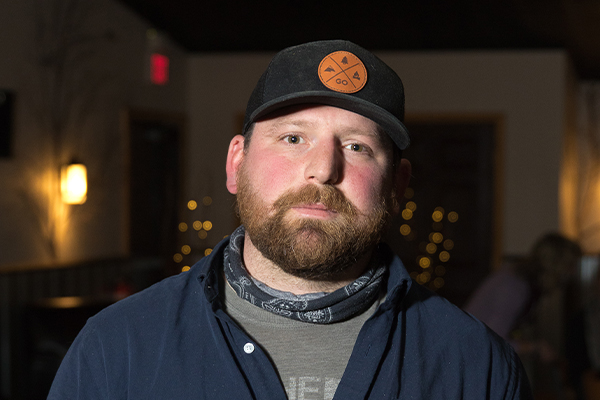 HIS GIVEN NAME IS CLARK DAVIDSON BUT YOU CAN CALL HIM WOODY. EVERYONE DOES.

WOODY IS NO NEWCOMER TO THE NORTH COUNTRY. Raised in Keeseville, on the border between Clinton and Essex Counties, he attended school at AuSable Valley. But while that’s not unusual, there is little that is usual about Woody. He is defined by his passions. In high school it was both soccer and art. While he excelled at both, he hung up his cleats and went on to study at the prestigious Art Institute of Boston. With his degree in hand, he returned to the North Country so that he could create a vocation out of his avocation.

The Adirondacks represent the perfect backdrop to Woody’s art, which often features landscapes, mountains, trees, and clouds — especially clouds. Much of his art, and the work of other internationally prominent artists, finds a home in an art gallery he created in downtown Keeseville. Named 1719 Block Gallery, not surprisingly at 1719 Front Street, it is an anchor in a town that is experiencing an urban Renaissance, in no small part because of the work of Woody and others who celebrate the past and are creating a strong economic future for Keeseville. Annually, Woody hosts the Keeseville Plein Air Festival embracing its scenery, architecture and people through art.

While his art brought Woody back home, business was also in his blood. Woody’s parents, Barbara and Dr. Martin Davidson have been active in Keeseville’s economic development for decades. His father, who maintained a medical practice, and his mother who brokered real estate and maintained a medical billing business in downtown Keeseville have invested time and again in the village and the surrounding area.

Woody obtained his real estate license as another tool to invest in the local housing and commercial markets. But unlike most real estate agents, he uses it as a vehicle to develop properties rather than simply selling them for others. He buys rundown or underperforming multifamily and commercial buildings and constructs some of the nicest apartments in our region. He doesn’t skimp on these investments just to make a buck. Instead, he creates residences that are up-to-date and attractively appointed. The apartments and homes he rehabilitates cater to young professionals who value the Adirondack lifestyle but who seek urban amenities. They enjoy downtown life, such as the art scene he is helping create in Keeseville. He ensures they have access to good broadband internet too because he knows that is what they need, perhaps to telecommute to jobs that could be located anywhere.

Woody, and his wife Ashley, typify the market to which he caters. They met in college, and she maintains a professional job at Plattsburgh State, after several years in the finance sector. Their friends and family share their values. This coalition of passionate young people are, in turn, investing in the Keeseville area, transforming family businesses and recognizing value in properties that others have ignored for decades.

The young professional couple has recently renovated a rambling former mansion in Keeseville, once owned by E.K. Romeyn, who was president of the Keeseville Bank. It had long been neglected and was tipping toward demolition. Instead, Woody purchased the home and is restoring it to its 19th century glory of high ceilings, beautiful woodwork, brickwork, and interior appointments, but with modern touches, including a modern and highly functional kitchen, and comfortable bedrooms, living room, and a special room that no doubt was once dedicated to men and cigars.

It is not a stretch to imagine how Woody developed his touch for creating beauty and value. That is what artists do. The distinction that has made such a difference for Woody and his vocations is that he is very much a doer as well as a dreamer. He doesn’t think of his work as transformational in his community. To him, it is pretty normal, and something his family had been doing for as long as he can remember. If you asked Woody what is the key to his success, he’d say, “Follow through.” His motto is to do what pleases him with the intensity and dedication it deserves. Woody believes life is what he makes of it. He’s willing to invest his money to make things happen and that makes him someone of note in our region.