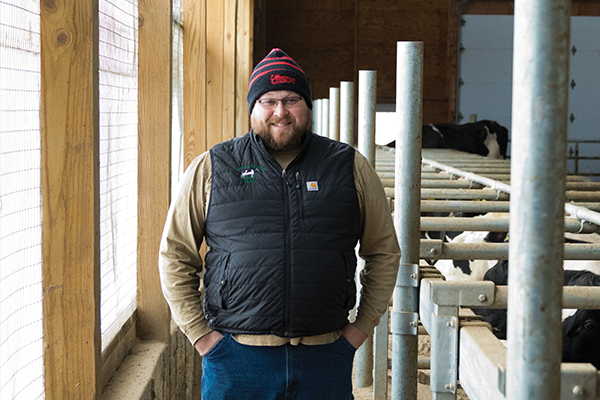 The Beekmantown property where Todd Giroux currently milks 79 cows has been in his family for 52 years. His father, Joe Giroux, the oldest of 10 children, grew up on a farm just a few miles away. When he graduated from high school a farm down the road was vacant, so Joe made a deal to rent it, bought 18 cows and his first load of grain. “The farm has come a long way since then,” Todd offered.

Todd Giroux is one of five children, the second youngest with two brothers and two sisters. Of all the children, he was the one who knew he wanted to continue the family’s farming tradition. Todd spent two years at SUNY Cobleskill and earned an Associate’s degree in Dairy Production Management. He has been on the farm full time for about 20 years.

When Todd was growing up, the family milked about 60 cows and later built additional stalls and expanded the herd to 85. “We never just depended on milk,” he said. “Dad always diversified.” Currently the Giroux family sells horse hay, compost, fence posts, sweet corn, extra crops and shell corn. As members of the Agri Mark cooperative, milk from the farm is sent to the McCadam cheese plant in Chateaugay.

“It’s one of those things you don’t forget,” Todd said of the date his family farm burned and more than 50 percent of his cows perished. The day had been a good one and he was rushing to finish his chores so he could meet his parents and his daughter at the Clinton County Fair. It was opening day. His wife, Vicki, was out of town visiting

her parents. “Everything was good when I left,” Todd said. As he met up with his parents at the fairgrounds he looked up and saw smoke. He turned to his father and asked if he thought the smoke was coming from their direction. It was.

They drove back to the farm and as they got closer, “You could see it was going to be hell,” Todd said. “We pulled up and there were flames everywhere.” When they arrived, his brother-in-law and cousins were already pulling cows out of the burning barn. “I’m blessed that they were willing to put themselves in that situation,” Todd reflected. Thirty departments (including ones from Hemmingford and Lacolle in Canada and from Vermont) responded to the fire and virtually every farmer he knew showed up to help. “That meant the world,” he said, adding, “but that’s what farmers do. They see a problem; they see somebody in need and they step in and help.”

Deciding to rebuild, especially at a time of depressed milk prices, wasn’t a difficult decision for Todd. “I don’t know what else I would have done. This is who I am. This is my life,” he explained. “The best part of farming is the freedom and independence. Having to go to work for someone else would have been a big change. I was young enough to start over and with enough ambition. My father didn’t tell me I was crazy and he could have.”

The waiting was the toughest part. “The barn was gone in six hours. In five days you couldn’t even tell it had been there but it took eight months to figure out what insurance was going to cover,” Todd said. “In the end, I think they were extremely fair, but it just took time.”

A BLEND OF OLD AND NEW

As he started to think about rebuilding, Todd knew he wanted to incorporate a robotic milking parlor, something he had been intrigued by for more than a decade. A robotic milking parlor is a voluntary milking system. The cows choose when to enter the parlor. When they do, the milking machine automatically connects to the cow’s teats and turns off when she is done. It was a great idea but it turned out the robots were a lot more expensive than Giroux was ready for.

Patience and perseverance paid off and Todd found a used system from a farm in Vermont that went out of business — two robots, the plate cooler, the piping, the grain bins, and the cow collars. The system was sized for 120 cows but he was milking only 79. Todd’s hope is that the larger capacity will help to lengthen the life of the machines. It also gives him flexibility if there is a maintenance problem. In November of 2018 when Giroux Family Farms started milking in its new barn, it became the first in Clinton County with robotic machines.

While virtually all of the old barn was destroyed, the bulk tank where the milk is stored and a steel utility sink survived and are used in the new barn. Images from the old barn hang outside Todd’s office and a painted quilt square, given to the family by a sweet corn customer hangs on the front. The barn is painted red and black representing Cabot colors, part of the Agri Mark cooperative the Giroux farm belongs to.

INFORMING A PUBLIC REMOVED FROM AGRICULTURE

“As long as I can remember, my father has been a part of the New York Farm Bureau,” Todd explained. Joe Giroux has served as president, vice president and a director for the organization, travelling to state meetings and farm conferences around the country. Currently Todd is the president of the Clinton County Farm Bureau. “I started tagging along with my dad and before I knew it, I was roped in,” he explained with a laugh.

“The best part of what the Farm Bureau does is help people understand what issues are affecting local communities and bring that information to the state to affect change,” Todd offered. “It is good to see the process in action.”

Todd also chairs the Farm Service Agency (FSA) Committee for Clinton and Essex Counties and is President of the Young Farmers of the Agri Mark group. “I’m involved in a lot of stuff that’s given me opportunities to understand what’s going on,” he said. He jokes that he has the time for all of it because, “I have robots.”

Todd views Mexico as an important trade ally for the dairy industry, because its population wants dairy products. In 2018, one-fourth of all U.S. dairy exports went to Mexico, amounting to sales of $1.4 billion. An analysis commissioned by the U.S. Dairy Export Council and the National Milk Producers Federation in 2017 found that every $1 of U.S. dairy exports to Mexico generates $2.50 of economic activity in the U.S.

Todd views the passage of the U.S. Mexico Canada Agreement (USMCA) as a step in the right direction. “A trade agreement is not going to save the dairy industry but it’s not going to hurt it either.” (FYI: With changes made by the USMCA, American farmers will get more access to the Canadian dairy market.)

Economic realities, coupled with advances in technology and changing consumer preferences have altered the dairy industry and led to farm consolidations across the country. Todd hopes that it doesn’t continue to the point where all the milk in the U.S. is produced on just a few farms. “I know it’s a possibility, but I don’t like it. I don’t want to see a day where there are no dairy farms left in Clinton County,” he concluded.