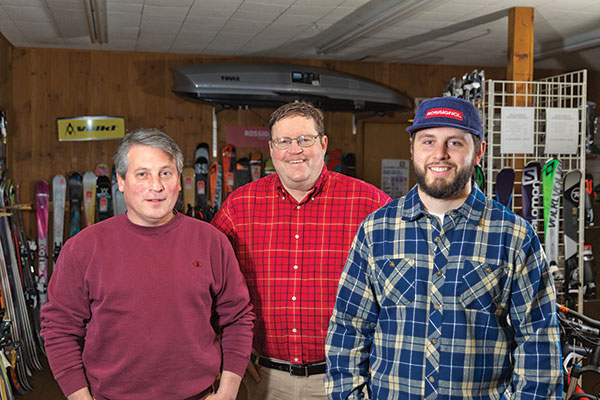 My dad was a skier,” said David Collin, owner of Viking Ski N’ Cycle (formerly Viking Ski Shop). “He started this business as a hobby because he loved ski- ing, and wanted to keep his family (which grew to five children) in skiing.
He was one of the original founders of Beartown Ski Area in Plattsburgh, and he began a ski shop out of our home. Growing up, I always had skis stored in my bedroom.”

Passion to Burgeoning Business
Was it the invention of the fiberglass ski in 1962, the use of snowmaking and grooming machinery at ski resorts, or the inspiring Warren Miller movies that steadily increased interest and participation in recreational skiing in the U.S. throughout the 1950s and ’60s? Regardless, it was no surprise when Malcolm and Nancy Collin’s skiing equipment business outgrew the garage next to their West Plattsburgh home in 1964. In response, they purchased land on Rt. 3 in Plattsburgh, and began building a Scandinavian-inspired retail shop. When it opened in 1965, the aptly named Viking Ski Shop was one of the first shops of its kind in the North Country; outdoor enthusiasts eager to “ride the slopes with great gear” came from a far-flung radius to shop for alpine and cross-country skis, boots, poles, and bindings.

Presciently, Viking Ski Shop was well-positioned when the interstate opened in 1967, and tourists on their way to Expo ’67 in Montreal discovered them, as did those who trekked to the 1980 Winter Olympics in Lake Placid. The expansion of Whiteface Ski Resort (which now has mountain biking trails in the summer), and its yearly racing events fueled the desire for schussing, carving, and exploring the backcountry on snow. After buying out a minority partner in 1984, Collin assumed the management of the business. His parents retired a few years later, and passed all their stock to him. “Titus Mountain [in Malone] and Beartown appeal primarily to families, and supplement Whiteface. It’s a great trio. We also appeal to families. Almost half of our customers come here from more than 40 miles away. We’re a destination business,” he said.

Over the last 50-plus years, Viking has succeeded by offering North Country customers and tourists to the Adirondacks high quality ski equipment, repair and tuning, and new products—such as snowboards—as they are introduced. Knowing that their customers also wanted to enjoy the beauty of summer, in 1992 Viking expanded its product line to include bicycles and longboards (similar to skateboards, but much longer and with softer wheels to give a smoother, faster ride). Winter and summer, Viking continues the tradition and celebration of playing outdoors, in every season, with the latest in safe, fun, versatile equipment.

“We run our ski, snowshoe, and snowboard business from October to April,” explained Collin. “It then takes 2–4 weeks to convert from a ski to a bike and longboard shop. No business is easy. We are very dependent on the weather. The sales and service on the bicycles balance things out.”

Tim Brennan: Service Manager
Tim Brennan, service manager at Viking, is a keen mountain biker who began assembling bicycles in high school. Moving to Viking with the purchase of North Slope in 1992, Brennan, who had never skied until he worked for Viking, runs a busy repair shop that focuses on wheeled gear in the summer and skis and snowboards in the winter.

“The one thing we focus on here is that the customer is #1. We want someone to come back here for life, and bring their children here as well. It’s kind of cool when we start out working with kids, and then they bring their kids. Sometimes there are challenging repairs, but everything we do here is fun stuff. This is definitely an upbeat environment. Not your average 9 to 5 job.”

Brennan reports that the bike business is growing as community acceptance of biking grows, driven by the fact that biking is a low impact exercise, and that bicycle mod- els are being developed so they can go just about anywhere. Due to interest in riding away from automobiles and in more natural settings, sales of mountain bikes are increasing most rapidly. The latest addition to Viking’s inventory of road bikes, mountain bikes, and hybrids is called a fat bike. It’s an off-road bicycle with oversized tires, typically 3.8″ or larger, and rims 2.6″ or wider, which are designed to allow riding on soft, unstable terrain, such as snow, sand, bogs and mud. Enthusiasts can literally ride this bicycle at any time of the year.

Brantley Beach: Sales Manager
Brantley Beach, sales manager, grew up in Syracuse, but has been vacationing at his family’s second home in Lake Placid since he was two. “I have a personal interest in outdoor activities in the Adirondacks, and experience using the products we sell,” said Beach. “I would shop here and use Viking’s ski and bicycle equipment whether I worked here or not.”

During his senior year at SUNY Plattsburgh, Beach gave up lacrosse so he could get a job/ internship at Viking. It reminded him of a ski shop he had worked for in high school. It was 2010, and he soon completed his dual B.S. in Finance and Business, with a minor in Economics. He began working at Viking part time, left in the summers for a while, then came back full time while he completed his M.A. in Leadership Studies.

“Each year, I got a little more involved,” recounted Beach. “During my second year, Dave asked me to be involved in the buying process. I got to go to trade shows—it really helps to touch and see different products. With my Finance and Business background, I knew I didn’t want to move to Wall Street, and started considering this as a career. There are a lot of good products out there, and the reps do a good job in wanting to show you their line. However, I always knew the brands I liked and had experience with. Between that, meeting Viking customers, and keeping up with the gear reviews, I learned how to select products that meet our customers’ needs and desires.”

The introduction of the twin-tipped ski (the tips on both front and back allow for skiing forwards and backwards) and the surge in backcountry skiing (skiers, wearing special boots made for both hiking and skiing, climb a mountain with their skis on their back, and cut their own trails in virgin snow) means that Beach must constantly monitor new trends in equipment to support new activities.

In addition to purchasing gear that goes on different terrain, Beach also selects apparel and accessories to outfit any outdoor adventurer from head to toe. Barbara Collin helps him with the women’s clothing and accessories.

Transitions and Plans for the Future
After nearly 40 years in the business, David Collin, and his wife Barbara, are preparing to retire and hand the reins to Brennan and Beach.

“I have two people who can run this business very well. It’s a natural progression, and they know more than I do,” said Collin. “I have to give full credit to my wife, who raised three kids while I was running the shop. Since our children have grown, she came into Viking to do the soft goods and advertising. We recently rebranded and created a fresh image. We’re not trying to change any- thing, just make it better.”

While he isn’t disclosing any specifics in preparation for the next phase, Collin stated that he sold the original Viking Ski Shop building a year ago, and is making plans to move to a larger facility that can house their rental inventory (they currently rent 300–400 ski packages per year) and provide easier access for customers. “We will stay local, Rt. 3, but perhaps a little more outside the heavy traffic zone,” said Collin. “Viking will continue doing business for the next generation of people who want to enjoy our beautiful North Country.”