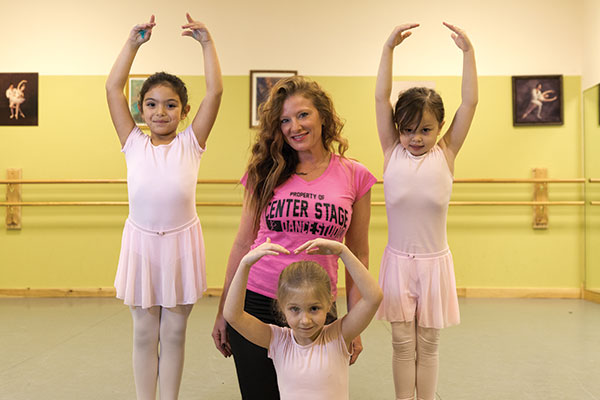 The first time Heather Van Arsdel went to a professional NBA game, it was on a whim. “I had no interest in sports, but a friend got me a ticket to a New York Knicks game,” she says. When the Knicks City Dancers took Madison Square Garden’s center court at half- time, it was the most exciting thing she’d seen in her life. “I thought, “Hold everything! That’s what I’m going to do!”

Van Arsdel went to the Knicks City Dancers’ very next audition, and won a spot on the premiere dance team. She would spend almost 20 years with the organization, six of them (1998– 2004) dancing at center court as a Knicks City Dancer and as a Liberty Torch Patrol dancer for the WNBA’s New York Liberty basketball team.

The excitement Van Arsdel felt at seeing the Knicks City Dancers for the first time is some- thing she’s been able to pass along at Center Stage Plattsburgh, the dance studio she’s owned and operated in Plattsburgh for five years. Center Stage is well known for its three performance dance troupes—the Lake City Kids, Lake City Dancers, and the Hot Mamas. All of the dancers (5–12-years-old boys and girls in the Lake City Kids, 13–19-year-old girls in the Lake City Dancers, and the moms and seniors of the Hot Mamas) are chosen by audition and they learn and perfect actual NBA dance routines and per- form them at civic and charity events all over the Champlain Valley. Some of their appearances have included the Biggest Loser Run/Walk, Harlem Globetrotter half-time show, Clinton County and Plattsburgh State University’s Relay for Life events, First Weekends, the Mayor’s Cup.

While the dance troupes are the most visible of Center Stage’s students, the studio offers a wide range of different dance classes—variety that Van Arsdel credits for the business’s steady growth. Center Stage has around 250 students, ranging in age from 3 to 99. It first opened in 2011, at a studio on Weed Street. By 2013, she was able to move to a bigger location in Plattsburgh Plaza. They offer classes during the school year, and a three-week session in the summer.
“I try to offer something for everyone,” says Van Arsdel. In addition to ballet, gymnastics, hip- hop, tap, Jazz, Modern, and Lyrical Dance, Center stage also offers early movement classes for 3- and 4-year-olds; adult classes in jazz, hip-hop, Pilates and TurboKick®; and a competitive dance team that competes in Albany two times a year.

She confesses that, early on, she had no intention of pursuing dance. Born and raised in Florida, Van Arsdel’s mother owned a dance studio and her late father was a commercial airline pilot. Her uncle and grandmother on her dad’s side were both newspaper reporters. “I was always drawn to journalism, but when your mom sticks you in dance at age three, and she owns the dance studio…I basically grew up there.” She won a full scholarship to attend the New World School of Arts in Miami, where she earned an associate’s degree in arts in dance. After graduating, she moved to New York City with dreams of dancing on Broadway.

After that fateful Knicks game and the start of her career with the Knicks City Dancers, Van Arsdel got involved with a Knicks outreach program that that taught hip-hop at schools in Harlem and the Bronx. Soon after, she was asked to coach and choreograph the elite Knicks City Kids dance team—16 boys and girls ages 6 to 14. She discovered that she really enjoyed working with the kids’ team—so much that she continued from 2001–2013, even after moving up to the North Country. In 2015, she was asked to coach the Westchester Knicks’ Dance Team.

Her move here came after she had stopped per- forming, and she had decided to finally give journalism a try. From 2006 to 2013 she reported for WPTZ television as a general assignment reporter, covering what she calls “many wild and wacky, but really good stories.” While doing a story on the Plattsburgh Rec Center, she interviewed Steve Peters, who asked if she would be interested in running a hip-hop clinic. There was so much interest in the first clinic, that they offered a second, which doubled in size. It was then that a lightbulb went on in her head.

“I loved reporting, but I realized that I’d really missed dancing, too. I saw that there was an interest and a need here.” She started Center Stage, and for the first two years, ran the studio after hours, covering stories and filing them by late afternoon in order to get to the studio by 6:30 to teach. It eventually became too stressful to juggle both, and in 2013 she committed to the studio full time. Today, she says the things that stress her out are “when someone’s tooth falls out in class or someone needs a band aid.”

At the beginning, Van Arsdel taught all of the classes herself, but as the studio grew, other teachers approached her, and she invited them to join the staff. She now has 10 instructors and while she normally only teaches hip-hop classes and coaches the dance teams, she can still teach any of the classes herself. “As a business owner, the last thing I want to do is cancel a class!” The faculty has regular meetings to develop plans to nurture students and help them progress. The dance teachers’ varied backgrounds— one has American Ballet Theater training; some of the hip-hop teachers are on the student Dance team at SUNY Plattsburgh—help add to the variety in class offerings.

Van Arsdel says hip-hop used to be their most popular class, but more recently, she’s seen more demand for ballet and gymnastics. “It’s a great foundation for all other forms of dance,” she says. She tries hard to offer classes that will interest boys as well as girls. A few of Center Stage’s unique offerings are a popular break dancing class, and a musical theater class, where students learn stage movement, how to play a character, and perform light sing- ing. “Even if you’re a ballet dancer or a dance team member, you’re always playing a role,” she says. “Students learn about controlling their breathing, about dancing and musicality.”

Like any good dancer—or reporter—Van Arsdel continues to stretch. She’s still a journalist, freelancing for ABC news, most recently covering the Nick Hillary trial for 20/20. “I think the key for me is ‘Don’t ever get comfortable,’” she says. Center Stage’s newest class offering is a Hula Hoop Dance class. “I love to try things at least once,” says Van Arsdel.