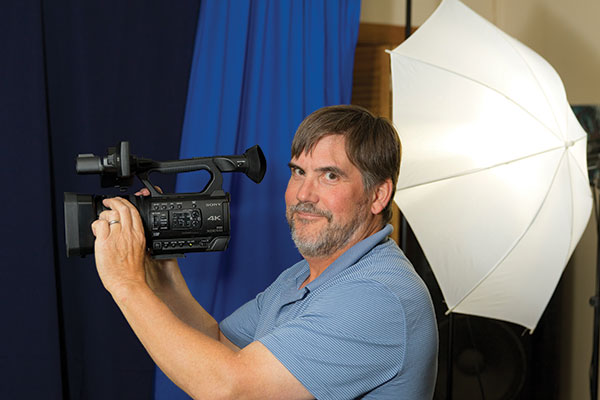 Bruce Carlin — Carlin Media
Bruce Carlin embodies the saying, “When you do what you love, you never work a day in your life.” A graduate of SUNY Plattsburgh in the early 1980s Carlin went to work for WPTZ, Channel 5 “way back when they actually used film!” The years passed and Carlin decided it was time for him to step off the set and set up his own shop as Carlin Media Services. He shared a space above the Amtrak train station on Bridge Street in Plattsburgh with Rick Dodge and eventually they came together to create Media Central. They ran the agency together, but all the while Carlin kept stoking the fires of his long time passion. Eventually, he received a grant to produce a film and he knew that in fairness to his business partner he needed to devote more time to it than his work at Media Central would allow. His career was moving in a different direction. Both Carlin and Dodge had made it a point to prioritize their clients and never failed to operate in their best interests. It was time for a change.

The grant Carlin received was from the IEEE (Institute of Electronics and Electrical Engineers) and WMHT and Union College. The film he created was titled “Divine Discontent: Charles Proteus Steinmetz (1865-1923)”. Steinmetz is largely viewed as the Father of Electrical Engineering. His work made the production and transmission of electricity possible and what would our life be today without electricity? Steinmetz was born with multiple disabilities that left him in pain most of the time and only about four feet tall, but that didn’t stop him from making a gigantic contribution to his field.

In 1887 Thomas Edison moved Edison Machine Works to Schenectady. In 1894 Steinmetz arrived in the city to help run the shop that became General Electric. Carlin’s grandfather worked there. And so Steinmetz, although small in stature, walked with giants and counted Einstein, Tesla and Edison among his friends. Who knew that the grandson of a company employee would go on to document his story and be nominated for an Emmy for the work.

Carlin is excited about his next project and enjoys telling stories about which he has a personal connection. He enjoys day-to-day commercial projects as well. He shared some of the footage of his recent work with the Roman Catholic Diocese of Ogdensburg and the Adirondack Coast with this SB writer. When asked where he sees Carlin Media in five years he smiled, “I don’t think I’ll ever be done working. I’m always thinking about the next thing.” And with a body of work like his I’m sure it will be award winning.

Rick Dodge — Dodge Marketing & Communications
Rick Dodge has been synonymous with marketing in the North Country for two decades and counting. He ran his own shop, later worked with Bruce Carlin and is now back at the helm of his own ship. The secret to his continued and varied success is maintaining a “customer first” business philosophy. “If you put the client first and don’t give a second thought to anything else, everything will fall into place,” he emphasized. Dodge Marketing doesn’t lose clients because they keep on earning their business. They earn it with integrity, with a code of ethics that means once they partner with a client in a specific industry they will not prospect for or partner with any of their direct competitors. Dodge retains clients by getting them results.

Enter the company’s Art Director Todd Brunner who earned his formal education in Manhattan and cut his media teeth on Madison Avenue. He spent almost 20 years working with agencies like J. Walter Thompson, Grey Worldwide and Kirshenbaum Bond and Partners in the city that never sleeps. In 2008, Brunner and his wife were looking at relocating and as serendipity would have it Media Central was looking for an Art Director. Brunner’s approach with clients is one that not many A.D.’s can offer — one that is limited only by the client’s imagination. He stays on top of his game and industry. Whether it is printed marketing materials or a social media campaign, Brunner insures the universality of the campaign across multiple platforms to insure the brand.

How those media platforms and formats work for the client remains Dodge Marketing’s wheelhouse. Back in the day when Dodge started in the industry there was print, radio and TV, and buying to insure full market coverage was, in large part, determined by the client’s budget. Now, in the digital age where almost everyone Googles what they want to know and Tweets or shares their opinions on Facebook, it’s a huge landscape to cover. And then there’s inbound marketing that is based on end-user word searches. To master that technology Dodge is in the process of obtaining his Google AdWord Certification which is awarded when a candidate proves their mastery of online advertising.

If all these platforms seem like too much to wrap your mind around it’s a good thing you’ve got a friend in the industry. Staying on top of the multiple platforms is what Dodge Marketing does best.

Between the ever growing industry knowledge base that Dodge represents and the creative powerhouse that Brunner has become, the sheer amount of marketing know-how that can be found at Dodge Marketing Company right here in Plattsburgh it would seem that anything is possible in the land of Dodge.