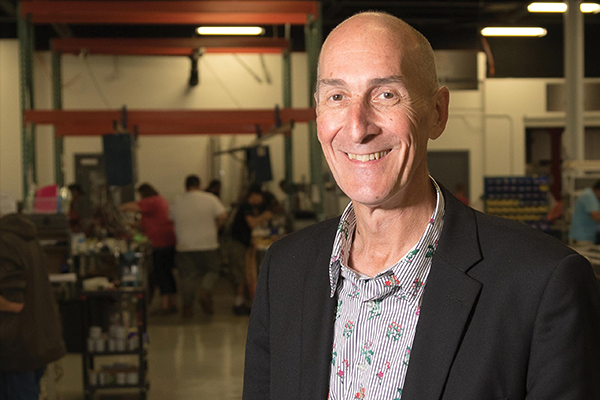 Among the many success stories is B3CG Interconnect. The company originated in St. Eustache (about 40 minutes northwest of Montreal) and came to Plattsburgh to partner with Nova Bus in 2009. Since then its business and partnerships have seen steady growth.

As a supplier of cables and harnesses, electrical and electromechanical connector assemblies, B3CG works with clients in public ground transportation, the medical equipment field, telecommunications, and a variety of other specialized functions.

Francois Demers, president and general manager stated, “We value our partners. They have been key in our long-term success. To be a partner in good times and in the tough times is very important to us. We value the entire scope of partnership.”

Demers went on to explain what makes the company unique. “We do not interact with the final customer. That is part of why communication with our partners is so vital to our mutual success.”

When the business to business supplier set up shop in Plattsburgh nearly a decade ago, its plant on the Military Turnpike in the Town of Plattsburgh, offered approximately 20,000 square feet. In 2017 BC3G moved to its new location off New York Road on the former Plattsburgh Air Force Base. The facility offers roughly fifty percent more production space. Since the move the number of employees has risen to 100 working two shifts and they are always looking for qualified candidates who would like to grow along with them.

Demers is pleased with the growth the company has experienced and was candid about its future. “We really aren’t looking for homeruns. Slow sustainable growth year over year is much more in keeping with what we’d like to see. Our focus is on producing a quality product and consistently delivering that quality to our customers.” That philosophy has allowed the company to establish a favorable reputation locally and worldwide.

Recently B3CG Interconnect was acquired by AQ Group, a global manufacturer of similar components and systems. Founded in Sweden in 1994 it, like B3CG, has shown steady growth with good profitability. The Group has approximately 5100 employees across 13 countries and three continents.

Now, with the acquisition of B3CG, AQ can add Canada and the United States to the list of countries in which it does business, and B3CG now has possibilities all over the globe from right here in Plattsburgh, New York.

Living the Value of Partnership

During his interview with Strictly Business Demers was enthusiastic about a new initiative created by the North Country Chamber of Commerce and its president Garry Douglas designed to enhance the region’s growing transportation equipment manufacturing sector. “The North American Center of Excellence for Transportation Equipment, based at the Chamber, is a partnership of all the companies who have a role in the current status and the future success of transportation equipment in the area,” he explained. “The goal is to work together, to share with each other what our needs are, and then to develop programs in support of things like workforce development, advocacy in Washington and Albany and other elements that impact our success. Having an industry advocate like Garry Douglas is critical to the partnership concept.”

When B3CG made the short trip south to set up its Plattsburgh plant, it was difficult to predict if the venture would be a success. Now, nearly a decade later, the electrical cable assembly and complex harness company is a pioneer which links the Plattsburgh plant to the worldwide market. The company is active in industry advocacy groups and brings that same active partnership value to all of its relationships. While it may not be the first company you think of in the area’s transportation industry, the work B3CG does is top notch and SB looks forward to watching its continued growth.