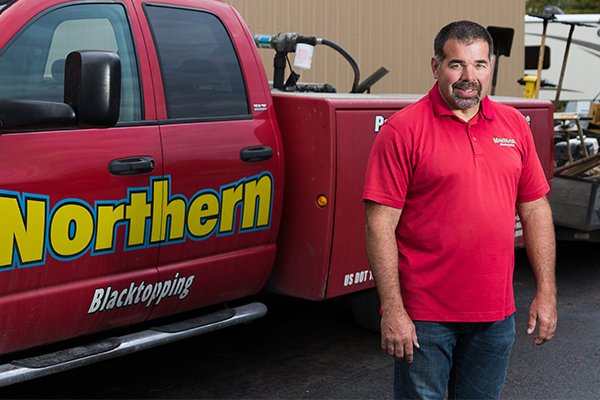 In the world of project management, there is a triangle that exists: time — quality and cost – and you can only pick two. Northern Blacktopping has found a way to change that formula and keep all three, consistently delivering high-quality projects with a fast turnaround at a cost-effective price. I met with Corey Trombley, president and owner of Northern Blacktopping recently to learn more about how the company found its groove.

Trombley got his start in construction through his parents who own Tracy Trombley Construction. After earning a construction engineering degree, he came back to the North Country and worked for his family until he bought J&R Blacktopping in 1998 in conjunction with his mother and brother. The company became part of Tracy Trombley, allowing it to add paving to its service offerings.

“I started out as a machine operator,” Trombley explained. “I did big dirt projects and that experience led me to believe there was no sense in hiring other people to do work we could do in house. We got set up and now we do everything from start to finish. That way we aren’t dealing with multiple companies. We can give people their driveway back quicker. Before, the waiting time between the base and the blacktop was a week. Doing everything ourselves we can come in on a Monday morning, get the pavement in, wait two or three days for it to set up and be gone. Bringing the steps in-house gave us more control over the quality, speed and cost of our projects. That was the first step to Northern Blacktopping growing into what it is today.”

Trombley explained, “It is a delicate art to find the balance between quality, speed and cost. Consistency is required. Mastery of the craft is key to finding and adjusting the speed, which, in turn, affects cost. Most importantly, because no company is an island, you need buy-in from employees and customers. That is crucial. Sustainable efficiency is the name of the game.

Trombley is hands-on from start to finish. He does estimates, meets customers and works alongside his crew throughout the asphalting process — sometimes he even helps to prep the site. It’s labor-intensive work, but it gives him unique insight and advantages. There is consistency throughout the project. His customers know who to contact and his crew knows what to expect. He is able to see the value stream from start to finish, giving him the chance to identify any inefficiencies or opportunities in real-time. But, most notably, Trombley just enjoys his job. “I enjoy blacktopping so it’s easy for me to go every day and the guys I work with are great. It’s more like a bunch of brothers going out, goofing around and getting the job done well. Everyone has an eye for quality.”

Trombley’s leadership values are simple and effective. There is nothing he would not ask his guys to do that he wouldn’t do himself. With an unrestricted Class A license in New York State, he is certified to drive all his equipment. He is ready to run a wheelbarrow, a shovel and get dirty next to his crew that averages 50-55 hours a week during the construction season. A surprising fact? He is the youngest crew member. The others range from 56 to 62 years old.

Blacktopping is hard work and every set of hands is crucial to keep each project on track, making sick days even more impactful than for the average job. Keeping an older crew feels risky given the physical labor and stamina needed for blacktopping, but Trombley has found the opposite — his crew rarely take days off. He keeps an eye on their health. Working closely with them gives him an opportunity to switch their responsibilities or give them time off when he notices changes.

Looking after and working alongside his crew are just two of the leadership values Trombley embodies. Another is giving his crew a voice. He asks them about their needs. At the beginning of the construction season, he asks everyone for their days off and when there is an opportunity to extend the season or job, he will check in with them. “The worst thing you ever want to do is force your employees to work more after they’ve worked hard for you for 29 to 30 weeks,” he observed.

Keeping the same crew leads to consistency and precision. Everyone knows their role and they know the process. It all flows like a well-oiled machine. On the other end of the human equation are the customers and the company’s reputation.

The past couple of years have been challenging for everyone. COVID has changed how the world functions and events have led to an unpredictably volatile market. Since asphalt is an oil-based product, it is heavily influenced by the Organization of the Petroleum Exporting Countries (OPEC), which regulates the price of oil internationally. It is priced every 30 days through a New York State index managed by the Department of Transportation (DOT).

Given the changes in the index, Trombley made the decision to book out for a shorter period to ensure accurate estimates this year. Reputations are based on a business’ word and he takes his word seriously. It is a mix of setting expectations, being transparent and keeping true to his word that has built Northern Blacktopping’s reputation.

“Everybody sees the price at the grocery store, at the fuel pump, at the lumber yard. They have seen it all and they know going forward that it’s going to affect everything. Normally I’d be booked out for the season by the middle of June. This year I didn’t. I only booked out for 30 days. We’ve always held the prices we’ve quoted firm and the only way I could do that this year was to keep them within a shortened time frame.”

It is a delicate balance booking far out in advance while keeping current projects on time, but Trombley has found it — another advantage of working alongside his crew. He will do an estimate for an upcoming job as prep work begins on an existing project, coming back in time to pour the asphalt with his team. It’s a harmonious flow, fine-tuned through years of consistent operations and a deep understanding of his crew’s ability, the job requirements and his customers’ needs.

Northern Blacktopping’s consistency, quality, speed and prices have generated a buzz. People recognize their trucks and word-of-mouth recommendations have led to new customers. Almost half of their current projects come from return customers. The dedication and work Trombley has put into Northern Blacktopping shows. “You take care of the people who take care of you,” he emphasized.