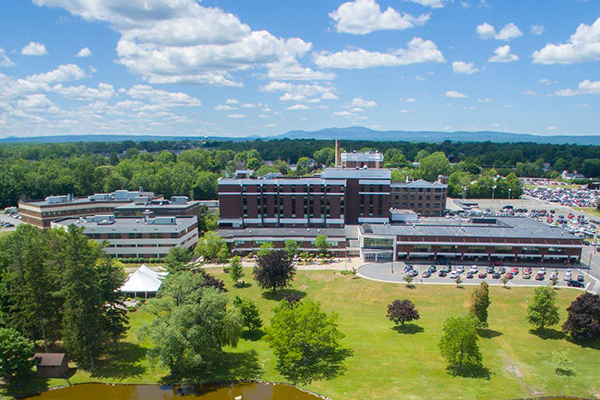 The story goes that on Christmas Day in 1922, Mr. and Mrs. William Miner, wealthy philanthropists from Chazy, NY, were having dinner with their good friends, Dr. and Mrs. Cassius Silver. The discussion, as it nearly always did, turned to the state of health care in the North Country. Dr. Silver said he’d like to build a new hospital in Plattsburgh. After the dinner, the four walked down Beekman Street and Mr. Miner turned to his wife and said, “Alice, you pick the spot.” What followed was a new and exciting era of health care for the North Country.

True to his reputation, no expense was spared in building the 212-bed Physicians Hospital on Beekman Street. Those who came to the facility expected the best health care and they received it. The staff, from the men and women who prepared the meals to those who performed surgeries in the four operating rooms, was dedicated to excellence and to perfecting their skills and the care they provided. They knew they were part of something special and took great pride in doing their best for themselves and their friends and neighbors. Mr. Miner would have it no other way.

Miner and Dr. Silver were instrumental in bringing quality health care to the North Country as were the Grey Nuns of Ontario who opened Champlain Valley Hospital in 1910 on Rugar Street (now part of SUNY Plattsburgh campus). Prior to the opening of the state-of-the art facility on Beekman Street, Dr. Silver and other providers cared for patients at the Physicians Hospital then located on the corner of William and Court Streets in Plattsburgh.

Over the decades, both hospitals continued to their missions to provide care to Plattsburgh and surrounding communities. Times changed and it became clear that by combining resources and talent, the region could be better served. In 1967, the Boards of the two hospitals signed an agreement to merge and create a single entity, Champlain Valley Physicians Hospital Medical Center (CVPH). A addition was built on the Beekman Street facility and the two hospitals became one in 1972. In 2012 CVPH joined Fletcher Allen Partners, which two years later became The University of Vermont Health Network.

Services at CVPH include an award-winning cardiac services program, accredited comprehensive cancer center, freestanding ambulatory surgery center, rehabilitation services, and a 24-hour physician-staffed Emergency Department. CVPH is governed by a 15-member Board of Directors, and is accredited by the Joint Commission, licensed by New York State, and Medicare/Medicaid approved.

With 2,300 paid employees, CVPH is one of the area’s largest employers. The team includes 300 volunteers, 160 physicians, 160 advanced practice providers (nurse practitioners and physician assistants) and more than 700 registered nurses.