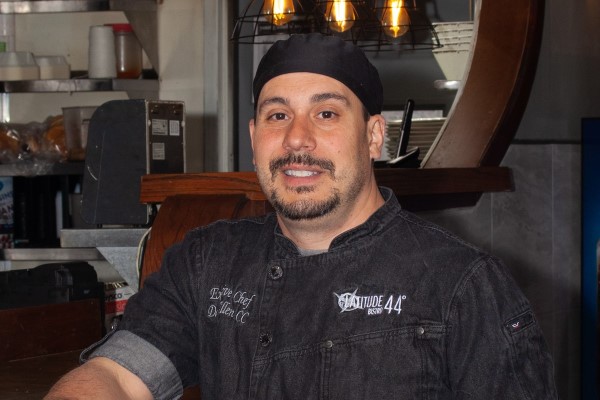 When Strictly Business first started the annual ‘Under 40’ theme issue in 2014, young chef David Allen was profiled as a new restaurateur in Plattsburgh. Allen’s reputation has grown in the years since, and his successful upscale bistro continues to thrive.

Success did not come easy for Allen. His early family life was both challenged and enriched by foster care. When he was 16 years old, he moved to Burlington, Vermont where he gained independence and became the first emancipated teen in the state. Allen started working in restaurants and found that he really enjoyed food preparation. Meanwhile, the Food Network and the entertainment industry successfully popularized a number of cooking shows, all of which fueled Allen’s curiosity.

By the time he reached his early 20’s he knew his passion was culinary arts. Living with friends and barely making ends meet, he did not have the money or the resources to go to culinary school, but when he eventually visited the school and talked with the financial aid office, generous financial aid and his hard work helped make his dream a reality.

After graduating in 2003, Allen moved to Las Vegas to gain exposure to fine dining restaurants, which was his specialty. He returned to Plattsburgh two years later, where he met his wife and started their family.

When the restaurant he was working at closed its doors, Peter Whitbeck, the property owner, encouraged Allen to start his own restaurant in its place. “Mr. Whitbeck loaned me some initial funds to get started and continued to help while we got settled,” Allen gratefully recalled. His restaurant opened in May of 2012.

Now, as Latitude 44 observes its 10-year anniversary, Allen recently sat down with Strictly Business to share his insights.

SB: What have you learned since we last spoke with you in 2014?
DA: Now that we have longevity and have made it through challenges including the pandemic, I have confidence that I did not have before. When we first started the restaurant, I was a chef. I’ve learned a lot since then, and now I am also a businessman. I have branched out into the community and have other ventures going, so I don’t have all my eggs in one basket anymore.

SB: What is your specialty in the kitchen?
DA: As a fine dining chef, I like to be creative and experiment with new things. I really like to focus on the artsy side of food and its presentation. I wasn’t sure that diners in Plattsburgh would really want that, but they do. If I had a signature food, it would be our honey truffle vinaigrette. It is something I created a long time ago. People know it and love it. I’d like to bottle and sell it someday.

SB: What important lessons did you learn early in your career?
DA: Based on the challenges I faced early in my life, it was unlikely that I would be a restaurant owner today. I owe a lot of that to people who have helped me along the way. I am also a hard worker. I stay focused, and never lose sight of my dreams.

SB: Who was your most influential mentor?
DA: I have been fortunate to have a lot of great support in my life. My Mom was a hard worker and she struggled to make ends meet. She made the hard decision to move me to foster care when I was in fourth grade where I lived with a hard-working farm family in Chazy. As a teenager, a generous family in Burlington took me in as their own and encouraged me through culinary school. Peter Whitbeck saw something in me and gave me the opportunity to get started.

SB: How have you inspired or mentored others?
DA: I look for opportunities to help people who might be in a difficult spot. A lot of people who need help can find it, but there are those who could use help, but don’t have any access to get what they need. I like to give back and help people like that.

SB: What advice do you have for our current group of young professionals in the community?
DA: Utilize the knowledge of others in your field. Don’t be afraid to ask questions, learn and ask for help. I was good at culinary, but I had a lot to learn to be able to run a business. I relied on people here who were already doing it to teach me. Network a lot, get out there and find those people who can be a part of your crew.

SB: What habits do you have that contribute to your success?
DA: I like challenges. I believe that if you don’t have fear about what you are doing, you aren’t challenging yourself and you might become complacent. I don’t ever want to lose the fear factor, whether it be in culinary or other ventures.

SB: If you could start your professional career over again, what would you do differently?
DA: I would have liked to travel a little bit more so I would have the opportunity to work in a few more restaurants. At one time I had a plan to go and work in Hawaii, but that plan changed. I am very happy with how it all worked out.

SB: How would you like to be remembered?
DA: I have had an opportunity to bring culinary skills to this area where there are not many culinary graduates. I am proud to say that I have taught a lot of local people. It would be nice to be known someday as a person who changed the culinary world a little bit in Plattsburgh.

SB: What is something no one would guess about you?
DA: I care a lot about the environment and have cared about it long before it was mandated. From day one we have been using biodegradable products in this restaurant. This came at an extraordinary cost which I did not have to bear. I did it back then and continue to do it now because I truly care about the environment.

SB: What do you do in your free time?
DA: The restaurant business is very demanding, but it is really important for me to spend time with my family. For this reason, we are closed two days a week, and that is family time. We are building a new house and we spend a lot of time up there. In the summer, we love to boat and we enjoy spending time outdoors.

SB: When we come back to talk with you again in 10 years, what will we talk about?
DA: I am working on creating other business income so that I can eventually slowly step away from the restaurant. I own some apartments, and we will be closing on the purchase of this plaza soon. I am really hopeful that one of the crew who has been working here a long time will eventually want to step in and take over the restaurant so that I can move on to other things.

SB: What inspires you?
DA: My family. Growing up the way I grew up was challenging. I like showing my kids what a hard worker I am, and doing things for them so they won’t have some of the struggles that I’ve had. The employees here inspire me. There are so many people who count on me here. I try to make sure I am taking good care of them and working hard for them. This isn’t all about me. The better I do, the better I can do for them as well.