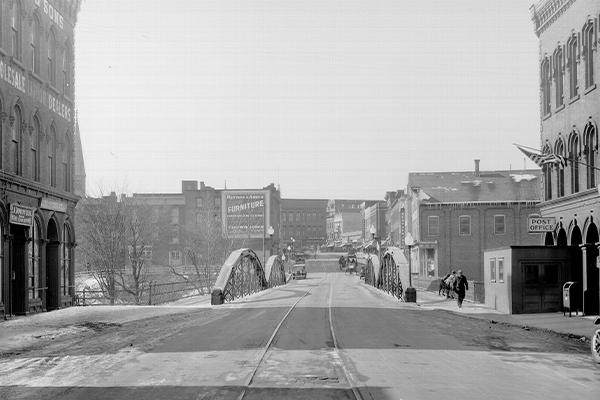 By Jody Parks | Photo courtesy of the Clinton County Museum

A national organization to represent the interests of U.S. businesses first took shape when President William Howard Taft (1909 – 1913) championed the idea. Taft’s vision became a reality the following year when a unified body of business interests was formed. Today that organization is the U.S. Chamber of Commerce, the world’s largest business federation representing the interests of more than three million businesses of all sizes, sectors and regions.

Area businessmen were quick to embrace the idea, forming the Plattsburgh Chamber of Commerce 1912. Following is a timeline of the Chamber impact on our region over the years.

1915 Applauded by the War Department for its efforts related to the establishment of a Military Training Camp. More than 29,000 men were trained at Plattsburgh Barracks between 1915 – 1917.

1918 Supported the Grand Isle Ferry Company in its effort to establish ferry service from Cumberland Head and Grand Isle Vermont.

1920 Created the Plattsburgh Winter Sports Association to promote recreation in the area.

1921 Led a campaign for a better water supply in Plattsburgh.

1930 Installed Christmas lights in the downtown area – the first colored lights in Plattsburgh.

1937 Tourism promotion paid off as nearly $500,000 in Canadian currency cleared through local banks.

1941 Applauded for its efforts that lead to new lighting systems in the streets of Plattsburgh.

1944 Focused on using economic development to put returning soldiers back to work.

1951 Held meeting to help members understand the potential impact of an airbase on the community.

1952 Worked to bring a divided community together over the issue of establishing an Air Force Bomber Base in Plattsburgh.

1953 Sponsored “New Industries for Plattsburgh” – a non-profit organization designed to bring new industries to the area.

1957 Supported the effort to build a new 120+ car parking lot in downtown Plattsburgh.

1963 Worked on a project to clean up Cumberland Bay.

1965 Promoted Plattsburgh as the Gateway to the 1967 Montreal World’s Fair. Two years later more than four
million people visited the area during the Fair.

1966 Changed its name to the Plattsburgh and Clinton County Chamber of Commerce.

1972 Participated in the U.S. Chamber of Commerce’s accreditation process which required an objective look at all Chamber operations.

1977 Sponsored the first Oktoberfest at the Crete Memorial Civic Center.

1977 Membership reached 530, making it one of the fastest growing Chambers in the country.

1980 Open 12 hours a day dealing with inquires spurred by the upcoming Winter Olympics in Lake Placid.

1991 Threw its weight behind efforts to “Save Plattsburgh Air Force Base” when the community learned it has been added to a possible closure list.

1992 Celebrated its 80th anniversary. Garry Douglas joined the Chamber as its president, ushering in a new era of support for area businesses.

1994 Took on a leading role in Team Plattsburgh, an organization of local leaders, when Plattsburgh Air Force Base was again placed on the possible closure list. In June it was announced that PAFB would close.

1995 Focused on helping small businesses manage through the loss of Plattsburgh Air Force Base and the falling Canadian dollar.

1998 Recognized the growing Can/Am Connection as the single greatest driving force of the North Country economy.

1999 Launched the drive for a new U.S. border facility at Champlain.

2000 Secured $170 million from the U.S., N.Y.S., Canadian and Quebec governments combined for the Champlain Port of Excellence. The Chamber was named New York State Small Business Organization of the Year by Empire State Development.

2002 Named the #1 Chamber of Commerce in New York State for helping to secure passage of landmark legislation on health insurance for sole proprietors.

2007 Celebrated the selection of Plattsburgh as one of North America’s top ten micro cities of the future by fDi magazine.

2008–2018 Played a key role in funding the Strand Performing Arts Center, helping to secure more than $3 million in state and federal funding for the redevelopment project.

2011-2019 Helped secure more than $50 million in state funding for development projects at Plattsburgh International Airport including a U.S. Customs operation.

2015-16 Played the lead role in winning the site selection competition for Norsk Titanium.

2015 Helped to secure $12.7 million in state funding for the new Institute for Advanced Manufacturing at Clinton Community College, and to facilitate a working partnership with Clarkson University.

2021 Earned recognition by fDi Magazine, a publication of the Financial Times of London, in 2021, identifying the Plattsburgh area as one of the top 20 communities in all of North and South America for Foreign Direct Investment Strategy.

2020-2022 Played a leading role in helping the North Country business community navigate through the COVID-19 pandemic from the beginning and continuing.

What an amazing impact the North Country Chamber of Commerce has had on the area. We thank the hundreds of volunteers who have contributed their time and talents to its Boards of Directors over the years and to its hard working and visionary staff. When the pandemic hit in early 2020, none of us had a game plan for survival. It was the Chamber that stepped up and took on the leadership role. The North Country would not be where it is today without its guidance and support and we will be forever grateful.