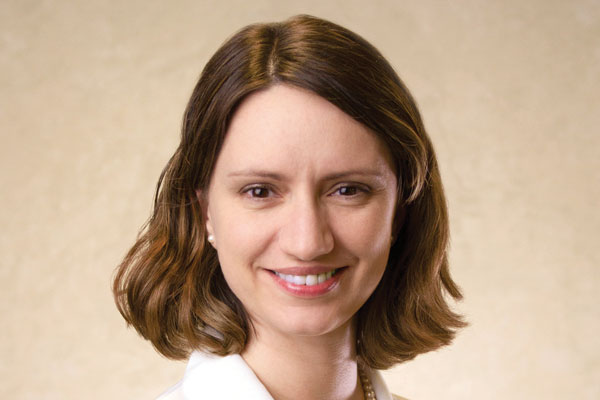 Dr. Elena Boland is a colorectal surgeon at the University of Vermont Health Network Champlain Valley Physicians Hospital. Arriving in the North Country in 2013, she said it was love at first sight and she now considers this her home. Dreams of becoming a doctor brought her thousands of miles from her birth country to Plattsburgh. She credits perseverance and hard work with helping her remain focused on achieving those goals. Boland is married, has two small children and juggles an extremely busy medical career with raising a family and enjoying the quality of life this region offers.

FOLLOWING ARE EXCERPTS FROM SB’S INTERVIEW WITH DR. BOLAND:
Background:
I was born in Minsk, Belarus. My parents were engineers and we moved to Israel when I was 12. I finished high school there and we moved to Skokie, Illinois, a Chicago suburb, in 1997 when I was 18. I remained there until 2006.

I began college at Oakland Community College, transferred after two years to Northwestern University and graduated with a Bachelor of Arts degree in Psychology. Next was Rush Medical College in Chicago. I did my residency at the General Surgery University of Nebraska Medical Center in Omaha and my fellowship for colorectal surgery at the Greater Baltimore Medical Center in Towson, Maryland.

You speak English with almost no accent at all.
My native language is Russian, but I have no accent, partly because my parents placed me in an English school in second grade and I learned that language from an early age. I later learned to speak Hebrew in Israel. For me, it was always total immersion in the languages. I didn’t have to rely on learning them from a book.

What do you think of this theme, “The New Normal?”
To me, that was never an issue. Even as a small child. In Russia, women worked. My mom and many female relatives were engineers. Everybody was a scientist or something in a related field. I never witnessed the model of a woman remaining in the home as I grew up. There was subsidized child care. You went to school and never considered gender issues or differences as far as either one being favored in or outside the home. It was the same in Israel. Everyone has to serve in the military and women do many jobs. It took me a few years in America to figure out there was a gender difference in education and the work place. I was actually very surprised when I came to that realization.

Do you feel male competition in your field?
We have three female surgeons in this office and one across the hall in plastic surgery. I agree this isn’t a typical set up. If you go to larger academic centers, you will often find the chairman and people in academia are most likely males. There are still fewer females in some positions.

There are only a handful of women department heads across the country. At the top, as far as surgeons go, it is still pretty much male dominated. However, coming up through the ranks, medical schools now have a higher percentage of females. It’s probably never going to be equal because women don’t necessarily want to dedicate that much time. Many are not willing to work 100 hours a week.

What was your impetus to go into surgery in the first place?
I didn’t want to go into surgery at first, but by the third year of medical school, we started doing clinical rotations. My first rotation was surgery because I wanted to get it out of the way. I thought I was going to be a psychiatrist or primary care doctor. As it turned out, I loved surgery. It was very hard, but I was driven. By the fourth year, I realized that’s what I wanted. It felt important for me to do concrete things with my hands where it made a difference. Without doing surgery, I didn’t get that kind of satisfaction.

Were there naysayers?
There were a few who said I couldn’t or shouldn’t do it. They were mostly non-surgeons who said it was too hard or, why would you want to do that? But, none of them intimated it was too difficult for a woman. Among the surgeons, some hinted I should be cautious about spending so much of my youth in training.

What do you consider your strengths?
Once I have a goal in sight, I’m determined to get there. I feel as though I’m forever a student, learning and doing my best.

Do you have any words of wisdom for young people?
If you really want something, don’t take no for an answer. Learn your strengths and weaknesses. Use your strengths to get where you need to go. Work on your weaknesses to get better. If something has never been done before, it doesn’t matter. I’m the first doctor in my family.

What pleases you as you end a day in the operating room?
I’m satisfied that I have had a direct impact on people’s lives. It’s a meaningful job and it feels good. Sometimes you do the perfect job; other times, things don’t go so well. It’s humbling. I try always to care and to do my very best.