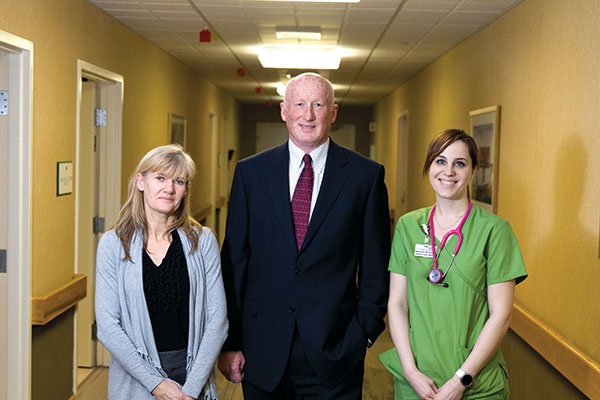 A polished brass bellman trolley stacked high with personal belongings. Ragtime music spilling out from the grand piano in the parlor. An elegant dining room set for the evening meal. “Close your eyes,” said Paul Richards. “Now open them. If someone said you were in a hotel in Lake Placid, you wouldn’t question it.” Just take away the nurses’ stations, the bubbly men and women in bright scrubs running up and down the halls and the conveniently parked wheelchair or walker every 10 feet and he’s right. Around the corner, laughter escapes the newly expanded rehab gym. It’s coming from therapists and patients enjoying themselves while still hard at work within the highly recuperative environment that is Meadowbrook Healthcare in Plattsburgh.

A concept more than a decade in the making has finally come to life at the skilled nursing and rehabilitation facility. “I couldn’t be happier with the way it turned out, but now we have to keep running it,” said Richards, Meadowbrook’s administrator/CEO. He’s been with Meadowbrook for 16 years and has had a hand in just about every detail of the $15 million expansion. Four 20-bed “neighborhoods” offering subacute and limited assisted care are now part of the 287-bed healthcare center, initially built as a 120-bed, long-term facility in 1974.

If you grew up in Plattsburgh you probably visited Meadowbrook at some point as a child, sitting cross-legged on the carpet with your classmates singing Christmas carols to a hunched-over row of expressionless, grizzled elders. Later in life you maybe sat at the edge of the bed in an elderly grandparent or parent’s not-at-all-at-home room, stifling emotion as you said goodbye for the evening, week or even month. We’ve all had less-than-pleasant nursing home experiences with loved ones and the very hard truth is that as our population ages, homes like Meadowbrook will become increasingly necessary.

According to the U.S. Census Bureau, the aging population in the United States is set to double by the year 2050 with the segment of those aged 65 and over creeping toward 85 million, and our society will need the infrastructure to provide for this population. Forward- thinking, wellness-focused communities like Plattsburgh are laying the groundwork while proprietary businesses like the newly renovated Meadowbrook Healthcare are proving they have long-term skin in the game. And they’re doing it right.

In a conscious shift from a medical model to a social model, Richards described the new atmosphere like a Normal Rockwell painting. “I see it in so many occasions, where we see two kids and a grand- mother and parents and a dog and they’re playing cards,” he said. Family members of residents at Meadowbrook can rest easy; no longer are patients stuck on a commode in their room or propped up in the hallway staring at the wall. Plus, dogs are welcome! “It’s a great asset to the community. Our staff members say they can’t believe Plattsburgh has something like this,” said Richards.

There are about 16,000 nursing homes in the United States, with the average nursing home in New York built in the 1960s and ’70s when Medicare and Medicaid were implemented. At the time, nursing homes were built as institutions with long hallways, double-load corridors and nurses’ stations in the middle. “We didn’t want any part of that,” Richards noted. Each of the four new 20-bed “neighborhoods” at Meadowbrook encircle a living room with a fireplace, library and dining room. All bedrooms are spacious and private with en suite bathrooms, showers and even heat lamps. Details like sliding doors on the bathrooms, extra support around the toilets, wheelchair accessible bureaus and built-in nightlights make self care possible for patients who wish to retain their independence. Richards worked with Schopfer Architects and LeChase Construction Services, both out of Syracuse, for the majority of the work, with local firms chipping in.

These amenities are supplemented by four full-time physicians on staff at Meadowbrook. In a model that only one percent of homes in the country have, Meadowbrook employs “some of the best physicians this community has ever had,” according to Richards. “We are so blessed to have them.” Drs. Anderson, McCullum, Phillips and Lacki service solely Meadowbrook, giving residents and patients access to consistent quality, on-site medical care.

Further amenities include necessary financial support. Most assisted living facilities don’t take in Medicaid patients, but Meadowbrook does, so if a patient “spends down,” he or she can stay. The limited assistance neighborhood is a concept that caters to those who are too fragile to go home but don’t want to go to an assisted living facility temporarily, only to have to move again. “It’s a niche where you age in place. In the event that you decline, you can still live here because we provide long-term care. Where if you go to assisted living and you physically decline, you can’t stay there,” Richards explained.

Another neighborhood—for short-term rehab or subacute care—is the bridge between hospital and home for people recovering from falls or joint replacement surgery. The average stay here is 30 days. They receive restorative, occupational and physical therapies with the expectation of successful discharge to return home independently as productive members of the community and a good quality life.

325 employees make the Meadowbrook model work—many have worked there for 15 years or more. Richards said, “Long-term care, specifically nursing homes, is an area of expertise. It is a complex and sophisticated profession, highly regulated, almost a quasi- private/public utility, so it’s important that you have people who understand the day-to-day in terms of regulations, how to provide the care and reimbursements. We couldn’t be luckier to have all these devoted people here.” Richards will add up to 50 more employees as patients and residents fill the newly finished “neighborhoods.”

Not only is Meadowbrook a significant employer in the community, it is also one of the top five contributors to the City of Plattsburgh’s school and property tax base. Unlike its neighbor CVPH and other non-profit healthcare organizations, Meadowbrook is privately owned and fully on the city’s tax rolls.

The Cambridge Healthcare company of Newton, Mass., owns Meadowbrook, as well as only one other facility—another rarity in the nursing home business. “A lot of nursing homes are being sold off to chains and equity groups and their intention is to make a profit. This facility, these owners, really care about the patients, the employees and the community. They have the long view, which is rare these days,” said Richards. “We do it right here and I couldn’t be more fortunate to be part of this organization.”

The owners ponied up 10 percent of the $15 million renovation budget, with 90 percent of the capital project investment funded through a 30-year HUD loan. In a time when businesses flock to town under the promise of highly incentivized multi-year, tax-free deals, and in the state with the nation’s largest nonprofit sector, you can bet Meadowbrook Healthcare is doing it right.

“It stems from having wonderful owners. We have the best owners any nursing home administration could want. They really care about the community and the facility, and about putting money back in to make it look good and feel good. They allow us to do all the right things to pro- vide great care and be a good employer,” said Richards. “I couldn’t be prouder of the people I work for and the people I work with. The people who come to this facility day in and day out and devote their lives to the elderly and to health care, they are special people. They are the heroes of this community. Collectively, this community is blessed to have Meadowbrook,” he said.