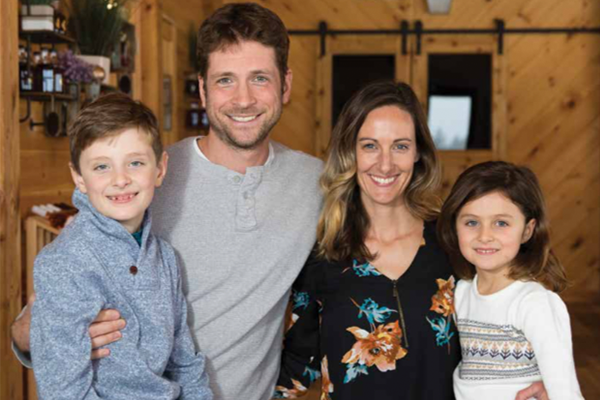 If you’ve never been up the Highlands Road in Keeseville, you might wonder if the name came from some Celtic settlers. If you have been up that way, you know that the road is carved into a small hill rise that is pretty common when you look at the area topography. But what is not so common are the incredible views of Lake Champlain that you get from that vantage point and, if you’re looking for a reason to venture out that way, consider a visit to Highlands Vineyard.

Ryan and Lindsey Campagna met while they were education majors at SUNY Plattsburgh. Lindsey was a North Country native. Ryan from Manlius, New York, served in the Army and Army Reserve for eight years, with a fifteen-month combat tour in Iraq, including the Battle of Fallujah. When he returned, he and Lindsey knew they wanted to build a future together.

Shortly after they were married an opportunity to teach during the recovery efforts in New Orleans presented itself and the two were on their way faster than you could say “carpe diem”. They taught in trailers and in make shift schools for five years, and were lulled back to the Big Easy by the charm of the area every summer. It was shortly after their first child, their “bayou baby” Jayden, was born that they began to think about where they would build their future.

While they loved New Orleans, it was far from home and family — a priority for the couple.

When the Campagnas came back to the North Country they knew just where they would settle. Lindsey Campagna née Ashline was raised on the Highland Road; her parents and maternal grandparents still had homes there. Sadly, her grandparents had passed away before they returned but in keeping with their wishes the couple renovated their home. And so, they began to cobble together their own forever, with family and community service as cornerstones.

They had both taken jobs in their chosen field. Ryan is a high school English teacher in Westport and Lindsey is a Special Education teacher at Keeseville Elementary School. But they wanted to do more “We wanted to create an educational experience not only for our children but for our extended family and the community,” Lindsey explained as we sat in the Highlands Vineyard’s beautiful tasting room framed from hemlock they harvested from their land. “Russ Pray milled and set the beams for us. The whole community has been supportive and it’s been great,” added Ryan.

Highlands Vineyard started with about 350 vines. “We’d done a little research and spoke with vintners in the Finger Lakes region. We wanted to produce something that we would enjoy,” Ryan offered. “We can’t compete with the growing season in California. Let them have their Chardonnay and the other varietals that do well out there. I want you to come here and try something entirely new, something you’ve never had before.” There are some excellent cold weather varietals that are available now and the field is only getting larger. Cornell, and universities in Minnesota, Vermont and Iowa are all sharing their advances in viticulture. “Originally, we thought we could benefit from a bit of a micro climate right on the lake so we planted some of the more sensitive varietals and babied them a little. But one day of 40 below and all that was a loss,” Ryan explained. “Now we’ve populated the vineyard with cold hardy vines.”

After a lot of hard work Highland Vineyard has upwards of 4,500 vines across ten acres, each one planted by Ryan and Lindsey who joked about how they were getting pretty good at planting and could get about 350 vines in the ground in a day. As I sat in the tasting room and looked up at the hill, I could see row upon row of vines. It is impressive to know that each post that marks each row was set by Ryan and his fatherin-law, Randy, and a bucket loader. That’s how most of the property came together, with Ryan and Randy working side by side, during excavation, planting and construction. Two generations working the land for the future of their family.

HOW SWEET IT IS!

While two full time jobs, two school aged children and starting a family vineyard might be enough for some families, the Campagnas are doing more. They also have a sugar bush from which they harvest their own maple syrup. Currently they have about 500 taps and have plans to triple that number. The syrup they harvest is bottled and sold at the vineyard and also used in their wine production.

Despite their busy schedule community service remains important to Lindsay and Ryan. They are working to revitalize Keeseville and, along with Mossbrook Roots Flower Farm, they recently coordinated a 5K-ish run/walk to benefit the North Country Honor Flight. In addition, they have partnering with other area businesses to raise upwards of $1,200 for a cause that is personal to Ryan who ran track in high school and whose son Jayden has also been bitten by the running bug.

Ryan and Lindsey were effusive when discussing the support they have received from both sets of parents, about how much that support means to them and to the growth of their business. When asked how they will decide which way to grow next Lindsey simply said, “We dream,” as a smile spread across her face.