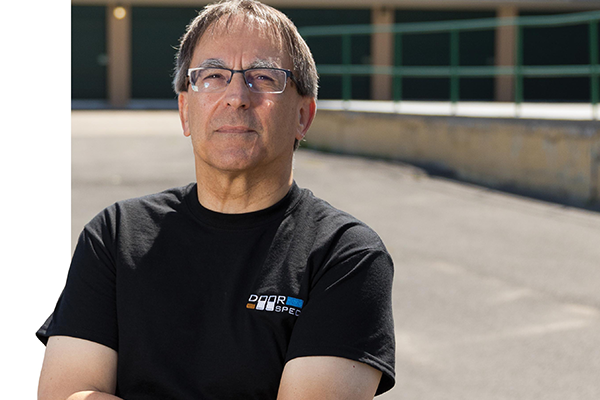 For this issue of Strictly Business I met with Stuart Crisp, Vice President and Lead Systems Engineer of DOORspec, a Canadian based company whose home office is in La Prairie, Quebec. The company’s base of operation here in the U.S. is the site of the former Bouyea Bakery located at 290 Margaret Street in Plattsburgh. The first thing that was evident when we met was Crisp’s easy-going personality and his British accent.

Crisp is an electronics engineer with over 40 years’ experience in the rail industry. He worked on the London Underground Metro system and SMC Pneumatics Limited in the U.K. In 1998 he came to the U.S. to work for Curtis Door Systems which was then located on the former Plattsburgh Air Force Base. Crisp recounted, “There was still a security gate that I had to go through and show identification back then. Things have changed a lot in Plattsburgh since that time.”

When Curtis Door Systems went out of business in 2009 Crisp and five coworkers decided to take their knowledge of the transit industry and start their own business. Crisp; Mathieu Charbonneau, president and lead engineer; Jean Bernard “JB” Landry, engineer; Pierre Tremblay, head of finance; Crisp’s son David, purchaser and planner and Denis Arbour, production manager are co-owners. The most recent addition to the staff at DOORspec is Logan Morris from Elizabethtown. Having graduated from Stoney Brook as a mechanical engineer Morris came on board earlier this year. Between the La Prairie location and Plattsburgh, the company has 24 full time and two part time employees. DOORspec also has a network of sales agents and support staff worldwide.

The company specializes in design, manufacture and development of door systems such as those used in trains, metros and light rail. They also deal with station infrastructure like the current Montreal Metro project. DOORspec is a certified Original Equipment Manufacturer (OEM) meaning that they produce parts and equipment that can be marketed by other manufacturers.

Some of DOORspec’s projects include Amtrak in the Thailand East Orient Express, the metros in Montreal as well as Kuala Lumpur, Hong Kong and Vancouver; the light rail systems in Las Vegas, Dubai and Jacksonville, and airport shuttles at JFK airport and in Hong Kong. They upgrade systems, do retrofitting, consultations, and testing of equipment. “Our plant in Canada does most of our mechanical work,” Crisp explained. “Here in Plattsburgh we do primarily electronics. “

Crisp took me on a tour of DOORspec’s 2,000 square foot Plattsburgh location which includes offices, a conference room and a repair workshop with a plethora of electronic devices and testing equipment. There was a cycle test bench, printing machine for wire labels, computers, diagnostic connector, control boxes, test rigs and a simulator for a door mechanism. Purchase orders were tagged and waiting to be shipped and equipment on the loading dock was waiting to be taken in and serviced.

Crisp explained that DOORspec is just beginning the Los Angeles metro train car overhaul project. Originally built in 1995 by Siemens the train cars are ready for an update. “Rail cars have a life of 40-50 years so the LA cars are at midlife right now. We will design and make eight doors for testing. We are in the design phase right now. This is our biggest project so far and we will create 450 doors before we are done.”

DOORspec’s Montreal metro project—now in its fifth year — is an upgrade in the metro system that was built for the 1967 Expo. “That system is very old. It needs to be wheelchair accessible and it needs new technology as well,” Crisp said.

DOORspec’s most recent project was the Rocky Mountaineer tourist train for Vancouver, British Columbia. “It was a luxury tourist train with two story cars that goes from Vancouver to Banff,” Crisp stated. “We designed new interior doors that were ADA (Americans with Disabilities Act) compliant. Some were curved doors and all were different sizes.”

I asked about how the possibility that tariff changes will affect DOORspec. “Right now, things are okay if you do the right paperwork and I’m hoping it stays that way,” Crisp observed. “But currently things are very confusing. Our three biggest raw materials are stainless steel, aluminum and rubber used for the door seals. If tariffs increase, prices will have to go up on our finished products.”

To help SB readers understand the complexity of the transit manufacturing process Crisp explained, “Door panels that we made for the Florida Brightline high-speed rail project started in Canada, from there they were shipped to Texas to be painted, came back to Plattsburgh for seals and glass windows (from Corning Inc.) and were then shipped to Sacramento for installation in the new rail cars. “This process creates a lot of jobs in the States as well as Canada,” he emphasized.

We are pleased DOORspec is creating jobs in the North Country.