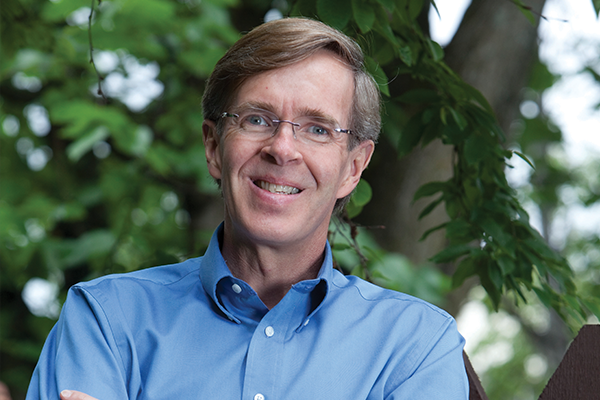 Education: A.A.S. in Business/Accounting from North Country Community College, B.A. in Business from SUNY Plattsburgh, M.B.A. from the University of Connecticut

Doug Hoffman is living proof that hard work pays off. As a young boy growing up in what he described as one of the poorest families in Saranac Lake, he believed in the

American dream of a land of opportunity and set out to make something of himself. He began working odd jobs at a young age, and by the time he was 15 he was helping his mother pay the bills. “At that time, my mother was a single parent trying to support four kids. I learned that if you wanted something, all you had to do was to find a way to earn the money to get it,” he recalled.

After discovering his initial career path in engineering was not a good fit, Hoffman decided to attend North Country Community College and SUNY Plattsburgh to study Business. During his time as a student, his number was called in the draft of 1969-70. His studies were delayed a year while he completed his active duty service in the National Guard and Army Reserves. His first professional role after college was at Aetna as a corporate accountant. Always looking to the future, Hoffman took night classes while working until he earned his M.B.A. That led to a coveted job at Price

Waterhouse in Hartford, CT. By that time, Hoffman and his wife were missing home and looking for an opportunity to return to the North Country.

The upcoming Lake Placid Olympic Winter Games gave Hoffman the opening he needed. He became the CFO/Controller of the Lake Placid Olympic Organizing Committee for the 1980 Olympics, which he considers one of the defining roles of his career. “During that time, I started my own CPA practice,” he recalled. “Right after the Olympics, I ended up buying an existing accounting practice in Lake Placid and I never looked back.”

Hoffman grew that single practice into a regional CPA firm which now has four offices across the North Country. With two partners and 20 employees to back him up, he has stepped away from accounting and tax work and now uses his expertise to help clients with business coaching and advising. He recently took time away from his business to share some of his success stories with Strictly Business.

DH: I consider my mother to be my mentor in my accounting career. I started out thinking I wanted to be an engineer. I struggled with the engineering studies, mainly because I did not have good study skills at that time. I remember the kitchen table career pep talks I had with my mother, who convinced me to take some Accounting courses. That’s what got me into the field.

SB: How does your engineering background help you in your career today?

DH: My engineering background made me a better accountant. In engineering you take a lot of math and science courses and learn how to solve problems. The way science moves forward is getting a challenging problem and then learning how to solve it. In the engineering studies I had, that was the foundation. I think that is what set me apart from other accountants.

SB: What was the best piece of advice you ever received?

DH: Exceed the expectations of others. Under-promise and over-deliver.

SB: What is your favorite quote and how does it speak to you in your life?

DH: At age nine, I watched John F. Kennedy give his inaugural speech, and what stuck in my mind was his quote, ‘Ask not what your country can do for you. Ask what you can do for your country.’ That gave me inspiration when I was young.

SB: What advice would you offer to someone starting his or her business career?

DH: Do your homework. Talk to professionals in the field that you are going into and get their advice. Take calculated risks, but always have a worse-case scenario exit plan so you can get out without losing any skin.

SB: To what do you attribute your success?

DH: I call it innovation, but my wife jokingly calls it scheming. I try to see challenges as opportunities, and to think outside the box for solutions. As I built

my accounting practice, I always looked for opportunities to help my clients even more than what they were asking for at the time. I saw my clients struggling in their businesses. I discovered that they needed help running their businesses and growing them to the next level. I started giving them financial planning and investment advice and saw an opportunity. As a result, I got further education that would prepare me, and then I expanded my accounting practice. Instead of accepting the status quo, I worked to find out what I could do to be even more successful, and to make my clients more successful also. Now I see myself as a business advisor and coach, and I can help my clients make important and critical business decisions.

SB: Tell us about a local business person whom you admire?

DH: A former client who I admire that stuck out early in my career was Ron Butler. He was the former owner of the Howard Johnson’s restaurant and hotel in Lake Placid. I always liked his management style, his values and how he cared for his employees. He started from scratch just like I did and built a very successful business.

DH: One thing that stands out in my career was being the CFO of the 1980 Olympics. It was quite an accomplishment. On the first day of the job, the Controller told me he had just put in his two weeks’ notice and was quitting. I was only 27 years old at the time and I wasn’t looking to take a tiger by the tail. I was looking to work with someone and learn from them. But the guy walked out the door, so I did have the tiger by the tail. All of a sudden, I became the Controller or the CFO, as it is called today. If I had made one mistake, I think my career would have been over, so it was definitely a trial by fire. For the next four years I was the person who handled all the accounting and financing for the Olympic Games. Fortunately, I did not make a mistake. As a result, people in the community gained confidence in me, and many of them became my clients.

SB: If you could have dinner and spend an evening with any well-known person, living or dead, who would you choose and why?

DH: I’m going to answer this question in a politically neutral way — both John F. Kennedy and Ronald Reagan. I admire what Kennedy did, especially the fact that he started the space race and he got us to the moon by the end of 1969 like he promised. That is why I got into engineering initially. I wanted to work for NASA. And Ronald Reagan — what he accomplished during his presidency was admirable.

DH: When I did my Army training, I was a combat engineer. I was taught how to disarm bombs.

DH: I try to spend as much time as possible with my family. I am very lucky because my children and grandchildren all live in Lake Placid. The rest of the time, I collect and restore antique cars. I started working at a gas station when I was 14 to help my mother with the bills. Since I could not afford to buy a car, I actually built one when I was 15 while working at that station. I’ve been building cars ever since as a hobby. It’s actually good therapy for an accountant.

DH: We need to do more of what I do — scheming, innovating and seeking problem solving solutions that are outside the box. There is a lot of potential for jobs that are based on the internet for businesses and services. There is some of that happening now but I think we can get tremendous growth in the future if we do more of that.