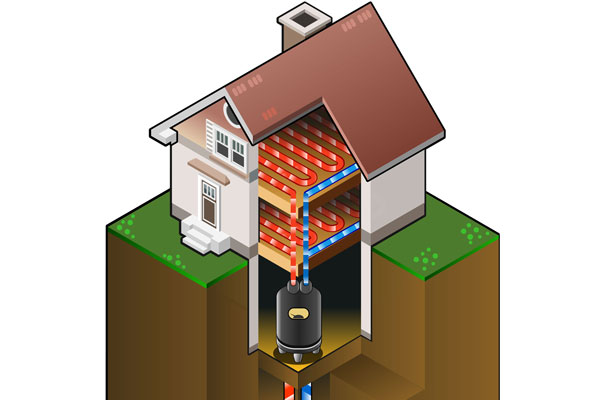 Rich and Barb Donela love not seeing an oil truck come up their driveway in the winter. For nearly a decade, through record breaking cold winters, they’ve heated their 2,000 square foot A-frame home on the Highland Road in Keeseville using energy that’s stored in the earth. Even with a lot of glass in the typically drafty, hard-to-heat open space of an A-frame, the Donelas insist, with geothermal they are never cold. “It’s consistent, comfortable heat,” said Barb. And it keeps them cool in the summer too.

In 2008 when Jim and Bob Murray were ready to get out of the logging business their father started 35 years ago, they were intrigued by the concept of geothermal. The brothers traveled to Albany for training, received certification through IGSHPA (International Ground Source Heat Pump Association), fired up their excavator and got to work installing the Donela’s system. “We had gone through the training, but we never had our hands on a heat pump until the first one was delivered,” said Jim. The brothers admit there was a steep learning curve to the installation process at first, with complicated duct work and low voltage wiring to the thermostat, but the Murray boys and their customer turned employee, Myles Janisse, have since become experts in the field, installing eight or nine systems per year, many in multi-million dollar Adirondack vacation homes.

Through their relationship with John Manning of Phoenix Energy Supply, a premiere geothermal heat pump supply company out of Auburn, New York, the Murrays became founding members of NY-GEO, a nonprofit trade association dedicated to promoting the geothermal concept throughout New York State. Jim and Bob expressed gratitude to Manning and his wife and business partner, Anna Felfoldi, who have been generous mentors as Greenway Energy learned the ins and outs of geothermal systems. “The great thing about this business with Phoenix is that John has lived and worked with geothermal for more than 35 years and there’s almost nothing he hasn’t seen. If we have a problem, chances are he’s seen it, and we can call him anytime on any job and he’s happy to give advice and share his problem solving skills,” said Bob. Felfoldi is an engineer with comprehensive knowledge of heat pumps, who, Bob noted, is “organized, fiercely intelligent and unfailingly loyal to her dealers.”

With 48% of the sun’s energy absorbed by the ground, there is literally an unlimited supply of stored energy just hanging out underground. The stored solar energy remains a consistent 45 degrees (give or take depending on the region), and the earth acts as a heat exchanger. Polyethylene pipes buried underground, either in a horizontal ditch or a deep vertical well, move a water solution which captures the stored energy and delivers it to the geo- thermal system in the house. Heat pumps can be powered by electricity from the grid or from the homeowner’s solar electric array. A refrigerant gas is compressed in the heat pump to transfer heat energy from the loop fluid. The hot refrigerant then heats the home’s air or radiant floor system.

“This is different from traditional propane or oil hot air in that it’s not capable of getting really hot, which dries all the moisture out of a space. And they’re made to run fairly steady, so you don’t get the temperature fluctuations,” noted Bob. In a region where we spend more than half a year indoors with the heat cranked up, geothermal systems guarantee superior comfort, offering reduced static and less drying of skin and nasal passages.

In the summer the closed loop system is reversed, operating like a refrigerator, moving heat from one location to another for optimal heating and cooling comfort throughout the year.

Geothermal systems cost about twice as much to install compared to traditional heating/ cooling systems, but provide clean, sustainable, environmentally friendly energy with virtually no wastage or generation of by-products. Geothermal energy has been around since ancient times, but is the next big thing in modern renewable energy