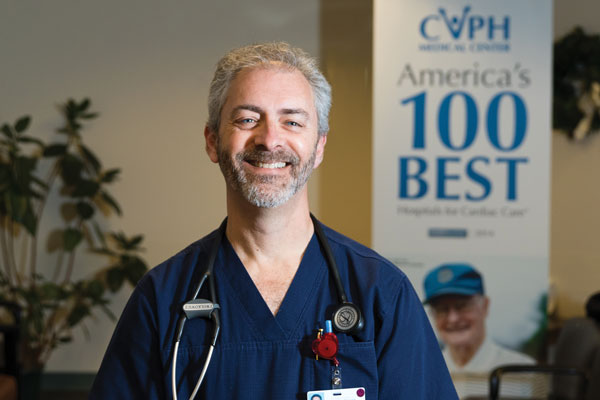 Dr. Wolkowicz has served the cardiac care needs of North Country patients since 1994 and has held the position of Medical Director since 2008. He grew up in Montreal and spent summers at the beach in Plattsburgh as a young boy. Driven toward a career in the medical profession, Wolkowicz completed his schooling in Canada where he met his wife Marla. Originally from the Midwest, Marla also spent time in the region during her career and became fond of the area.

When it was time to settle down after med- ical school, the couple set their sights on Plattsburgh. “There was a position open here, but I was too green back then and they needed somebody more experienced,” Wolkowicz recalled. He ended up taking a job in Wyoming, but four years later had the good fortune to find a position in Plattsburgh.

SB: What qualities do you believe are necessary for success?
JW: You have to find something that inter- ests you. You have to have drive, and you have to have intelligence. Luck and being in the right situation always helps. Depending on your position, being able to interact well with other people can be very important. I am not the most outgoing person, but I work hard to be a conciliator rather than a fighter.

SB: Where did you get your drive?
JW: I knew my parents wanted me to be a doctor. Although I wouldn’t admit it at the time, I think that was a significant influence on my choice. I knew I always wanted to be good at what I did. In my profes- sion, if you don’t have the drive to do a great job, then you shouldn’t be in this job. I couldn’t do this work without really wanting to do it well. I was always driven.

SB: What is your approach to management and leadership?
JW: I am quiet. I try and gently corral people into seeing my per- spective. I tend to think about things a lot and try and support my ideas. I try to avoid confrontation. Sometimes I think I need to be more confrontational, but I don’t like to. I establish alliances with key people who I can count on and who have like-minded thinking. I try to work by consensus rather than brute strength.

SB: Have you ever had to fight for something you felt was really important’?
JW: Yes. After I finished medical school in Montreal, we moved to Wyoming for four years. While we were out there my wife led a campaign to allow epidurals for baby deliveries in the state, which wasn’t being done there routinely at the time. She led the fight. I was really the supporting cast. We got a few people angry at us, we had a few threats aimed our way including veiled threats about layoffs. We stood up for it, and we took our blows. It was hard, but it was a worthwhile thing to do. It took a while, but we prevailed in the end. It taught me that some things aren’t so important and you can let them slide, but sometimes you have to stand up and fight.

SB: Who was your most influential mentor?
JW: John Baker was the established cardiologist in Plattsburgh when I got here. He was very relaxed, well respected by his peers and his patients, and he was an excellent cardiologist.

SB: If you could you have dinner with a famous person, alive or dead, who would that be?
JW: Einstein, although I think he might be too over my head. I like physics, and Einstein’s theories are fascinating to me. My son and daughters and I actually talk a lot about what the theory of relativity really means, and what the implications of it might be.

SB: What is something no one would guess about you?
JW: That I am Jewish, but I don’t believe in God. I grew up Jewish, going to religious school. I can speak and read Hebrew and I learned all the traditions. I am also very scientific. I always had a hard time dealing with the idea of God. I kind of believed it, but it didn’t mesh with what I knew about science. In my opinion, religion is a con- cept common to many different cultures that helps to explain what man cannot otherwise explain about nature and about life. Once I acknowledged that I did not believe in God, things actually started making sense to me. I am still Jewish. We follow the traditions and taught them to our children. The cultural traditions that have gone down from generation to generation are still big things for me.

SB: What do you do with your free time?
JW: I really enjoy skiing and cycling. Skiing was very much a famfily thing. Marla and I taught our kids to ski when they were little. Cycling I almost always do alone.

SB: What do we need to do to continue to be successful in the North Country?
JW: The American system of health insurance is crazy. We need to get people health insurance. I see patients struggling every day. Either they don’t have health insurance or their insurance is inadequate. As physicians we negotiate all the time. If someone needs a drug that they can’t afford, we have to find another to replace it. I might think a patient would benefit from three diagnostic tests, but they can only afford one. There are a significant number of people with whom we have to negotiate treatments based what they can afford. Obviously some of those problems are not just local to the North Country.

SB: What have you learned in your career?
JW: In the 25 years I’ve been doing this, I’ve learned to trust my gut. I get a sense about things, and I can see pattern recognition. It is hard to teach, it just kind of grows on you over the years. It is something I did not have in the 1990s that I have now. I think I am a much better doctor than I was before. Not because I know more about medicine, but because I can see the whole picture and think holistically. The funny thing is, in the 90’s I thought all I needed to do to be the best doctor possible was to read a lot. Now I know better.

SB: What are you most proud of professionally?
I am proud of how far we have come with the cardiology pro- gram at CVPH. When I joined in 1994 I was one of three cardiologists. Now there are 12 of us. There are many things we can do for patients now that we couldn’t do back then. I can’t take credit for most of it, but I have been an integral part of it. My contribution has been being a kind of midwife to help the program grow. I have had a lot of involvement in our networking with Burlington, and in expand- ing the program.