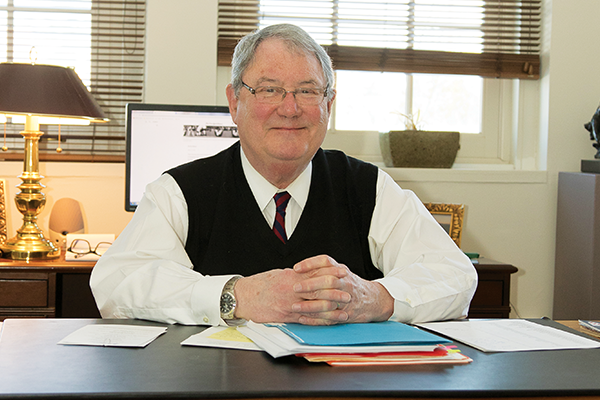 Dr. John Ettling is no stranger to Strictly Business. He was featured in the magazine not long after he began his tenure as president of SUNY Plattsburgh in 2004, so it is only fitting that we once again profile the long-time local leader as he prepares for his retirement. This May he will preside over SUNY Plattsburgh’s commencement ceremony for the final time.

During his fifteen-year tenure, Dr. Ettling has been an active participant in the community, serving on organizational boards including the North Country Chamber of Commerce, the Regional Economic Development Council, Mountain Lake PBS, the Miner Institute, and CVPH Medical Center. He is well versed in the Plattsburgh modus operandi of collaborative problem solving, and sees the area and the college as one and the same entity. “We are so embedded in this community,” he said. “The relationship is solid and good. Our alumni include the chair of the Clinton County legislature Harry McManus, Plattsburgh Town Supervisor Michael Cashman, and the incoming president and CEO of The Development Corp Dave Champagne. Mayor Colin Read is a professor here. We are Plattsburgh and Plattsburgh is us.”

With a national search for his successor underway and spring semester in full swing, Dr. Ettling graciously took time out of his busy schedule to reflect on his career for SB readers.

SB: What important lessons did you learn early in your career?

JE: To work hard. That sounds simple but it’s not so simple. Work hard, realizing that it’s not a sprint, it is a marathon. Hard work has to be sustained over a lifetime. I have a friend who once said, ‘The harder I work the luckier I get.’ I now know why. Things seem to come your way when you work hard.

While hard work is important, it is also important to do it with a purpose. I don’t know if it is because my father was a minister but I have always thought that hard work ought to be in service to other people or for something larger and outside of one’s self. Not just hard work to make money or for selfish reasons. Doing something that benefits the lives of other people is what makes the hard work worthwhile.

SB: Have you had any radical course changes in your career?

JE: I came out of college as a successful history major but I had decided to go to medical school. I went home to Houston and started a chemistry course in anticipation of that. Then my draft board stepped in and reclassified me as 1A, which meant I would be drafted. I dropped out of that chemistry course and immediately signed up for officer training in the Air Force. That was a significant turn in my future plans. I certainly wasn’t the only person my age whose draft board changed their plans.

SB: How did you choose history as your academic field of interest?

JE: It chose me. It has always been a fascination of mine. It may have something to do with my father. We would take vacations in the summer and we would always stop to look at the historical markers on the road and visit historic places like Gettysburg, Pennsylvania. History was always there in my life, so it was something that I fell into. I did not have to pursue it.

One of the things you learn as a graduate student is that history, by and large, is what is agreed upon. Usually it is only the winners or the survivors who are getting together to agree upon what happened, or how it happened. As time goes on, that can change as each age addresses the past with a different set of questions or different imperatives.

JE: Paul Gaston was a professor at the University of Virginia and the Director of the Honor’s Program I was part of as an undergraduate. He directed my senior honor’s thesis. He liked it, and as a consequence he nominated me for all sorts of awards that I received when I graduated. It was powerful. Later when I wanted to go to graduate school, he orchestrated my applications and I was accepted at each of the schools I applied to. It was extraordinary.

SB: What changes have you seen in higher education?

JE: In the last few years, public attitudes toward higher education have changed nationally. The polls suggest that there are an awful lot of people who mistrust colleges and faculties. At the same time, they also realize that a college degree is still the ticket to a better life in the United States. It is not a guarantee but for most people it is their ticket to a higher paying job and lifetime earnings. But at the same time many people are profoundly skeptical about what takes place on a college campus. It is almost a schizophrenic attitude. They believe a college education is necessary, but at the same time, they don’t trust it or at least the people in charge of it.

SB: Where do you think that mistrust comes from?

JE: I think it is probably due to things that the public has read about the way conservatives think their voice has been silenced on American campuses. The perception is that the faculty are considerably to the left of American voters as a whole and they use their positions as a way to proselytize a left of center view of the world in American politics. I’ll admit it is hard for a genuinely conservative voice to be heard, or at least taken seriously, on a college campus. A case in point is what happened at Middlebury College last year when a conservative speaker wasn’t allowed to present.

SB: Tell us about your approach to management and leadership.

JE: Hire the best people you can, make sure they understand what they are expected to do and then stand back and let them do it. If they need course correction, then quietly step in but don’t embarrass them in front of other people. The secret is that you have to like the people that you are working with. It is really simple. You have to emphasize with them, even if they are people who are in your face all the time and irritate you. Engaging in the lives of the people who you work with is important.

JE: That I have persisted and flourished at times in this role for 15 years which is almost three times the life expectancy of the average American college president. I have beaten the odds. My position is fascinating still, and no two days are the same.

JE: I once danced in a production of The Nutcracker here on our stage on campus. I was in the party scene at the beginning. Trevor Laughlin asked me to be in it, and I agreed.

SB: If you could have dinner with a well-known person, who would it be and why?

JE: Matteo Ricci. He was a 16th century Italian Jesuit priest who was sent by his order to try to gain admission to the Ming Dynasty of China where they did not allow westerners. He was supposed to convert the Chinese to Christianity. He had an extraordinary memory and he used it to try to impress the Chinese intellectuals to let him in. Back before the printing press was widely used, they used mnemonic devices that helped them memorize incredible amounts of information. What Ricci did was to visualize a palace with many rooms and each room had things in it. Every fact or idea that happened in the west would become an object in his memory palace. He really impressed the Chinese and eventually became the first westerner who was admitted to the Forbidden City in Beijing. I’d love to have dinner with him. I think it would be fascinating because his 16th century mind would be so completely different from our minds today. There is a great book about him called The Memory Palace of Matteo Ricci by Jonathan Spence.

JE: I read, read and read some more. In the summer I read with a baseball game streaming in the background. I love baseball. When I have it in the background and I am reading a book, life is good.

SB: Do you have a favorite quote?

JE: “Keep your head up and your stick on the ice.” Anyone who follows hockey will be familiar with this one. To me it is a reminder to be aware of your surroundings and to be prepared. Things move quickly and you have to be ready.

SB: What should the North Country community do today to ensure a prosperous future?

JE: First of all, keep doing what you’re doing. There is a kind of synergy between the economic development engines here including the Chamber and The Development Corporation. That’s what we need. We need to find ways to create good jobs for people who will then want to live here and raise their kids here.

There are a growing number of graduates from SUNY Plattsburgh who would like to stay here but can’t. The reality is that we prepare a lot of them for jobs that just don’t exist in the area so they have to leave and go to New York, Boston and other places. Based on some of my work with the Vision2Action committee, we need more culture, recreation, jobs, and educational opportunities. If we can establish these things in Plattsburgh then we could become the kind of place where people stay.