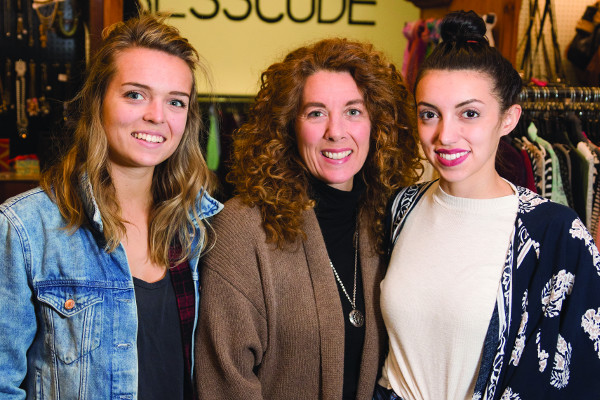 In December 2007, Julie Woodley had an inkling she was going to lose her job and began making a plan for herself and her three school-aged daughters. Looking back nearly 10 years later, she said she had no idea then what she’d set in motion. Current reality could not have been further from “the plan,” but the women at DressCode wouldn’t have had it any other way.

Although Julie Woodley is the founder of DressCode, the consignment shop on Bridge Street in downtown Plattsburgh, she’s not the current owner. That title falls to her two eldest daughters.
As it turned out, Julie was right about losing her job 10 years ago. She was a business teacher and just before the holidays, her principal let her know that her program would be discontinued. She would have a job for the remainder of the school year, but her position wouldn’t be carried through for the 2008–09 school year. Good thing Julie was already working on a business plan. She took it to The North Country Small Business Development Center* and recalled that Rick Leibowitz, director of the North Country SBDC at the time, was amazingly helpful. “He told me I had a good plan, suggested some tweaks, and worked really hard to help me,” she said.

Julie recalled how she found the location for the store and knew she needed to keep over- head low. “When I found the spot, my dad came to look at it with me and it needed a lot of work. I told the landlord I would take it and clean it up if he gave me the first month’s rent free, and we had a deal!” Woodley shared how much tender loving care she and her dad put into every little detail of the shop. “My dad built the dressing rooms and helped me put up all the racks; he helped me clean. Honestly, if it weren’t for him, the place wouldn’t look like this. He did so much work to help me.” With a wide smile, she added, “He told me I was going to need to sell 20 pairs of jeans a day to make it!”

DressCode is a consignment store where shoppers can bring their gently used clothing and get either a store credit or a check. What DressCode doesn’t use, shoppers can either pick up or choose to donate.

It was close to nine years ago that Julie started down the road of owner and business operator; returning to teaching was in the original forecast. Here we are and Julie couldn’t have worked harder or be happier.

At the beginning of the year Julie was working at her store and thinking about obtaining her business educator certification. Like anything Woodley decides needs doing, it gets done. As luck would have it, a position teaching business became available at the Ausable Valley Central School District and with her newly acquired certification, Julie was perfect for it. She planned to teach full time and operate the store as well, but fate had other plans.

Caitlyn, Julie’s eldest daughter, had been travelling abroad for months and as winter came to Tasmania, Cait found herself cold and homesick. She made plans to come home to the other side of the world, and arrived to summer in the North Country. She had begun help- ing her mom at the store when her sister Jess called. Jessica had graduated from the Fashion Institute for Technology in the spring and her plan to become established in Manhattan was hitting a few glitches and she needed to regroup. A week later Cait headed down to Manhattan to pick up her sister. “Even then, it wasn’t to come back and run the store,” Cait recalled. At the time the sisters thought they would work at the store for a little while, and then take on New York City together.

But something happened at the store. The young women decided (in Caitlyn’s words) to “bloom where you’re planted.” When the siblings really started to sink their teeth into running the shop, they received invaluable support from their mother in navigating the licensure, tax certifications, and nitty-gritty business details that most people have to learn the hard way. “We are so lucky to have Mom, and this opportunity with the store—it’s all because of her,” said Jessica.

All three women bring different strengths to the business, and Julie is incredibly proud to have handed the reigns to her daughters. “They really are incredible; they have great ideas and have been able to grow markets that I was struggling to get into,” said Julie. Jess has established the business on Instagram and has worked with local college students to establish the store as an event venue for sororities or other groups—where the shop opens exclusively to their group for a few hours. Caitlyn shared that she and her sister both have the goal of getting more involved in the downtown Plattsburgh business community. They are networking with their neighbors and are looking forward to the possibilities this new opportunity offers for both of them.

Sometimes items they come across have a resale value beyond what the local business model here can support. For those, DressCode is looking at online venues like Poshmark.** Caitlyn explained, “There are some designer items that shoppers look for in areas with a higher con- centration of high fashion customers. We’re looking into featuring these items there, and our customer would still get a percentage of that sale.”

The sisters also have a line of DressCode Originals—hats and scarves that are made for the store. The knitting was something that Julie started and a lot of their customers are happy when they are in stock.
While you might not think DressCode has something for you, “this store is magic,” said Jess. “I have had more than one experience where a customer has come in looking for something in particular, and if we don’t have it, it comes in soon after,” she said. “You just have to say it out loud,” she added with a wink.

Earlier this year, none of the three women would have thought they would be where they are at this point in the year, but with a little of the DressCode magic they are all loving it. They have plans to expand and no corner of the North Country is out of the question. These women aren’t trying to fit into glass slippers; they are shattering glass ceilings and embracing their roles as business owners in the North Country. With grit, grace and determination, they are growing a business on a foundation set for them by their mother.

* The North Country Small Business Development Center is part of a network of 23 centers in the state of New York that provide comprehensive business counseling, training and market research services to small business owners. The program is funded through a collaborative agreement between the U.S. Small Business Administration, the State of New York, and local funding sources. The local office is hosted by the School of Business and Economics at SUNY Plattsburgh.