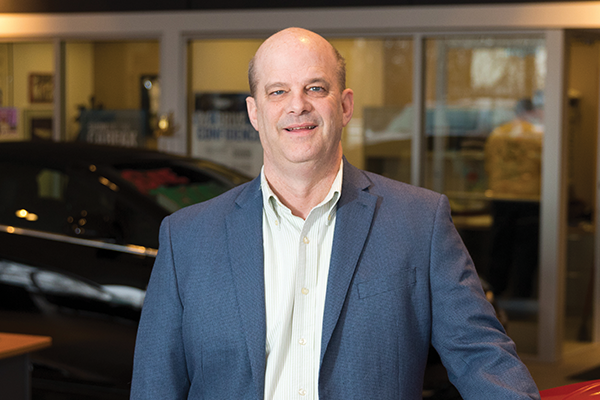 “I learned everything from my father growing up,” said Richard Knight Jr., owner and president of Knight Buick GMC. He added, “especially the meaning of Harry Truman’s famous quote, ‘The buck stops here.’” When he arrives at the dealership at 383 Route 3 in Plattsburgh every weekday at 8:30 a.m., Knight greets his staff, checks his telephone and email messages, and then walks the lot. Rows of gleaming, competitively priced, compact to mid-sized SUVs are juxtaposed with powerful pickup trucks and stand ready for Knight’s loyal customers— just as top-of-the-line automobiles and trucks have for the last 35 years.

“The most fulfilling part of the job is enjoying my customers.” Knight said. “In fact, 50 percent of our sales come through repeat business and referrals. I am also blessed to be in a position to offer employment to talented people in this great community my family chose to be part of. My father and I have established ourselves here, and it is important to me that we continue to contribute.”

Originally from Syracuse, NY, experienced Cadillac salesman Richard Knight Sr. was invited to join Bob Currie Oldsmobile-Cadillac in Plattsburgh as general manager in 1981. With the understanding that they would eventually sell him the dealership, the elder Knight’s wife and two teenage children remained in Syracuse (so the children could finish high school) while Knight Sr. relocated. Upon his high school graduation in 1982, son Richard Jr. followed his father to Plattsburgh and began on-the-job training by washing cars at the dealership. As planned, Knight Sr. purchased the dealership in 1983, and with great fore- sight, added a GMC franchise in 1992, correctly predicting that pickup truck ownership would become popular in the North Country.

Knight Jr., who loves to hunt and fish, said, “Dad instilled a love of the outdoors in me, and I thought I wanted to be a forest ranger—until I started working at the dealership. Since dad started out as a salesperson, he told me that he wanted me to be smarter than him. He set up a program where I would spend six months doing each task in the dealer- ship. After I washed cars for six months, I spent six months in the parts department, six months in the service department, then worked in the body shop, and finally sold cars. Being a young person, I liked working as a parts manager the most, and went back to that for several years.”

Father and son worked side by side successfully until Richard Knight Sr.’s untimely death in 2000. “Dad told me I’d have to work six days a week, and he was right, but I’ve enjoyed running this business. I take great pride in continuing my father’s work, and treating the employees and customers the way I want to be treated.”

EVOLUTION OF A LONGSTANDING BUSINESS

A business cannot be successful for more than three decades without responding to inevitable changes. In 2001, one year after Knight began running the business alone, General Motors (GM) discontinued the Oldsmobile. At the time, it was the Knight’s #1 seller. To offset this, Knight purchased a Pontiac franchise from Bill Santa that same year.

Knight experienced another setback in 2009 when GM declared bankruptcy. Due to its financial crisis, the auto manufacturer discontinued the Pontiac line and closed thousands of dealerships. This meant Knight could no longer sell Pontiacs or Cadillacs. As a rejoider, he purchased a Buick franchise from Richard Cochran, which gave rise to the advent of the present-day Knight Buick GMC.

“It’s interesting that this business is now a combination of the GMC franchise my father purchased and the Buick franchise I purchased,” said Knight. “Currently, 65 percent of our sales is in new vehicles (with 35–40 percent of that leased vehicles), and 35 percent is in used vehicles. The GMC best sellers are the Terrain and Acadia SUVs, and the Sierra and Canyon pickup trucks. Our Buick best seller is the Encore, a stylish compact SUV.”

With an average sales cycle of three to four years, Knight, as with all dealers, must constantly advertise and market his products. Previously relying on newspaper and radio advertisements and convivial television commercials starring his own employees, Knight has added a website where customers can shop online, a Facebook page, and Google ads.

“Different customer demographics respond to different types of media,” explained Knight. “There are more ways than ever to shop and gain information. Our office includes a Business Development Center just to maintain the website and do digital marketing.”

Adding to Knight Buick GMC’s character and warmth, three friendly cats—Becca, Regal, and Sierra—recline on carpet-covered platforms, and purr to solicit attention. Giving his favorite cat, Sierra, a scratch behind the ears, Knight confesses to a love for his feline companions. In addition to the three who live at the dealership, he feeds stray cats in huts in the parking lot, and has a few more at home.

According to social psychologists, having animal mascots at a shop is not only good for the animals, it’s also good for business. If the animals are well cared for, as they are at Knight Buick GMC, it reflects well on the management. In addition, customers feel that if business owners care enough to welcome an animal into their establishment, they must be good people, and customers are more apt to shop there. Lastly, the presence of an amiable animal reduces stress, increases collaboration, and gives employees and customers a topic of conversation.

While two of the three resident cats are shelter rescues, Sierra arrived in a most unusual way: on the engine block of a GMC Sierra. In 2015, the owner of the pickup heard a kitten meowing in the engine. He couldn’t get to it so he brought the truck to the dealership for assistance with getting the kitten out. “We worked on it for a while, and suddenly a little ginger kitten jumped out and ran outside,” said Knight. “We finally caught him, and he’s been here ever since.”

Knight regularly gives financial support to local animal shelters, and gets quite a few cats adopted into good homes. The dealership makes another contribution to the children of the community by sponsoring a Little League team.

Currently employing 32 people—3 in the parts department, 9 in sales, 5 in the office, and 15 in the service department—Knight spends a significant portion of each day ensuring that they are properly trained, fairly compensated, and generously treated. “I expect a lot from my employees, but I try to look at the big picture and be fair. I remember that they’re human beings and need understanding and encouragement as we all do,” said Knight. “I am proud of our low turnover,” he added.

In order to run a conflict-free, efficient operation with top-performing employees, Knight disclosed his secret: daily manager meetings. He explained: “When GM went through bankruptcy in 2009, I realized I needed to include my managers in the pulse of the finances of this business. The more financial information I gave my managers, the more they understood the big picture. Therefore, I hold a managers’ meeting every day at 10 a.m. We can share sales figures, and see how we’re tracking our objectives. In addition, we can discuss any personnel issues that may come up. Sometimes all I do is listen. It’s a way to air any frustrations and resolve things. We can also bounce ideas off each other. It helps us work as a team, and we don’t have any friction in front of the customers. My managers know I will always tell them the truth, and I find they respond to this and work with me, and with each other.”

Despite the promotional opportunities, Knight closes the dealership Memorial Day and Labor Day weekends to ensure every- one gets some time off to spend with their friends and family.

Continuing the family tradition, Knight’s son, Christian Knight, works in the Business Development Center, and son-in-law, Cody Meyers, is a member of the parts department. For the past five years since their three children have grown up, Knight’s wife, Jannette Knight, helps run the office.

Although Knight’s sister, Wendy Knight, doesn’t work in the dealership, she does a weekly feature called “Meow Mondays” on their Facebook page. It stars their resident mascots as a way to invite potential customers to look at the page and view the dealership’s latest offerings.

“We feel blessed to have done so well with our dealership,” said Knight. “Our intention is to be here for a long time.”