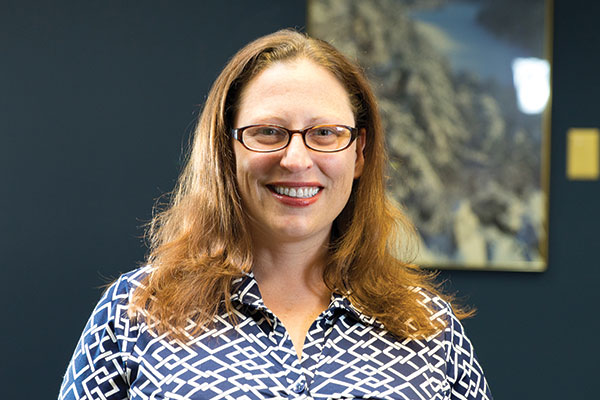 Growing up in Plattsburgh as a self-described “Air Force brat,” Erin Hynes became interested in community and economic development at a young age. “I lived through the closure of the Plattsburgh Air Force Base,” she explained. “My father was the Base Transition Coordinator for the Air Force. I knew back then that I wanted to concentrate on community and economic development. I wanted to work with base closure communities.”

Hynes targeted her education toward public administration, starting at CCC and later finishing her undergraduate work at SUNY Plattsburgh. Ever looking toward the future, she had the foresight to specialize her Political Science degree in the area of Policy Administration and Law, adding a minor in Canadian Studies.

After graduating with an M.P.A. from University of Vermont, her initial hope of working at the federal level in Washington, D.C. was derailed after the terrorist attacks of September 11th. “I was actually in that wing of the Pentagon the Friday before the attack,” she recalled. The hiring freeze that followed changed her trajectory and led her to state government instead. She spent several years working in Albany as the Director of Public Policy at the New York State Assembly before coming home to Plattsburgh to join the TDC as its Economic Developer. Today she is back working for the state, but this time promoting the region as the Deputy Director of Empire State Development’s North Country Regional Office.

Hometown: Plattsburgh
Current Position: Deputy Director of the North Country Regional Office of Empire State Development
Family: 2 Corgi dogs Moka and Murphy (According to Hynes, “Everybody knows me as the crazy Corgi lady”)
Education: The Plattsburgh Triple Crown: Plattsburgh High School to Clinton Community College (CCC), then on to SUNY Plattsburgh for a B.S. in Political Science. Hynes went on to complete a Master’s degree in Public Administration (M.P.A.) at the University of Vermont.
Community Involvement: Numerous eco- nomic and community development boards and advocacy groups during her eight-year tenure with The Development Corporation (TDC), particularly passionate about the Workforce Investment Board, former chair of the CCC Foundation board, and membership on the Board
of Directors for the state-wide NY State Economic Development Council. Hynes and her family are active volunteers with the North Country Veteran’s Association.

Following are excerpts from Strictly Business’ interview with Erin Hynes.

SB: What important lessons did you learn early in your career?
EH: Don’t be afraid to fail, and don’t be afraid to venture into the unknown. Sometimes those situations where you push yourself into an area that is not in your comfort zone lead to the best outcomes. You never go into a situation thinking you are not going to succeed. If you take a step and it doesn’t work out to your advantage, you might consider it a failure. However, this is all part of the learning process. When you realize and embrace that “failure” is part of life, you will put yourself in a better position professionally in the long run.

SB: What advice would you give to someone coming up in the business world?
EH: Never miss an opportunity to network. Your peers are the first part of setting up your network for the long term. Networking is so important. You never know when a chance meeting could lead to something bigger 10 years down the road. It is amazing how your network grows as you move on to different positions. For me some of those have been lifelong connections.

SB: Who was your most in uential mentor?
EH: My father. He is my biggest supporter and also my toughest critic. When we were in that mentor-mentee mode, I wasn’t his daughter. I was someone he was helping navigate the professional world. He put me on a pedestal, but he was also very honest with me when something needed to be pointed out. To this day I trust his insight.

SB: What do you believe the North Country community should do today to ensure a prosperous future?
EH: Concepts like TDC’s Vision 2040, which evolved into Vision2Action, are what the community should continue to focus on. The movement has already started and I think it is imperative we continue on this current trajectory. 21st century economic development is grounded in a workforce economy. Millennials will find a place they want to live first and then find the job later which is counter to how baby-boomers and Gen X’ers, like myself, were taught to succeed. If we want to attract well-rounded people, we need to offer them a well-rounded community. The greater Plattsburgh area is on the cusp of becoming a destination where these Millennials are going to want to come, stay, work, and raise their family. Things like the Strand Theater, the Arts corridor, and First Weekends, are all putting downtown Plattsburgh on the map to attract the next generation of community leaders.

SB: If you could have dinner and spend an evening with any well-known person, living or dead, who would you choose and why?
EH: I would choose the Founding Fathers. I am fascinated with the Constitution and the birth of America. I have actually read the Constitution a couple of times. As someone who is a political junkie, I would want to know if we turned out how they thought we were going to, basically did we meet their expectations?

SB: What is something no one would guess about you?
EH: I embrace my inner artist. Most people know me as a type A left- brained personality, so they probably would not realize that I have a flair for the arts. I tap danced for many years. Bonnie Black was my teacher. I can play clarinet and flute, and I love fine art. Monet and Jackson Pollack are some of my favorite artists. Secretly, deep down inside, I want to be a museum coordinator.

SB: What inspires you?
EH: My niece Harper, who is three. It is so refreshing to be with her. Sometimes as adults we forget what it is like to be a kid, having a brain that has not been conditioned yet. It is so inspiring to see the world though her ever-learning eyes. It gives you pause to see what is really important in life, and can be humbling at times. She really does inspire my inner child!

SB: What do you do in your free time?
EH: Spending time with my family is very important to me. I enjoy flower gardening, but I can only seem to keep them alive when they are outside. In the summer I enjoy being outdoors, and walking my dogs. I used to be a rock star with my free time, but now I struggle to leave work at work and I think I’m becoming a bit boring. I guess that means I’m a retired rock star now.

SB: What are you most proud of professionally?
EH: When I worked at the New York State Assembly, I rose through the ranks and became part of the senior staff as the Director of Public Policy. At the time, I felt this was the “I have arrived” moment in my career. However, there was always a part of me that wanted to come back and be involved with economic development in the community where I grew up. As luck would have it, I was home on a weekend visit and saw an advertisement that TDC was looking for an economic developer so I applied. I was offered the job and one of the proudest moments, for me professionally, was making the decision to leave Albany and move home as part of TDC’s team. I knew I could bring with me everything I had learned, including dealing with economic development policy at the state level, as well as all the connections I made

SB: If you could start your professional career over again, what would you do differently?
EH: I don’t think I’d do anything differently. Everything that I’ve done thus far has made me who I am today. The path I took wasn’t linear, and there were some bumps and obstacles in my way, but I ended up where I want to be. I’m using my degrees in the manner expected, and I am on the trajectory and career path of my choosing. Every step I took was laying the foundation to the next endeavor. I really enjoy what I’m doing. It has been a fun journey that has brought me full circle to the job I am in today. And I still have more to give .