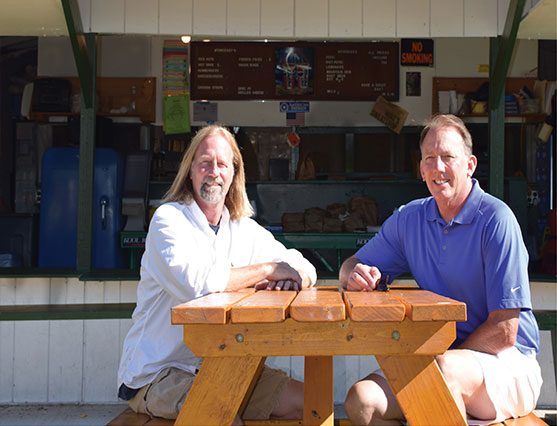 Steve and Mic Farrell have owned McSweeney’s Red Hots for 25 years this summer. “It’s interesting,” Steve noted, “that our very first ‘restaurant’ was actually at the Clinton County Fair in 1990. Now we have three locations, and we are still going back to run the original food booth.” The Farrells were offered the opportunity to run the business at the Clinton County Fair by Frank Akey, who at that time had the rights to operate the booth, but was not going to do so. “Frank owned the property on Route 9 North where we built our first location,” Mic said, “and he also owned property on Route 3. He eventually sold both properties to us.”

The Farrells have parlayed that original booth into three thriving local restaurants. “In a world where 80 percent of restaurants that open are closed within the first five years of business, we are very fortunate to still be here,” Mic said. Their first location, on Route 9 North, opened in 1991. Following that, the brothers opened the Route 3 location in March of 1994, and the Route 9 South location (formerly Nitzi’s) in September of 1997. They also had a location in Champlain from 1995-1997, but it closed when the outlet mall located there went out of business.

In the mid-90s, they had a mobile concession stand, which doubled as a traveling catering unit. “Mobile McSweeneys,” Steve laughed. “We used to bring it to the North Star’s football games, and also catered weddings, car shows, even golf tournaments.” Both Steve and Mic had plenty of experience in restaurants and customer service before starting the businesses together. Steve brought a strong financial background to the table, and Mic brought experience with hands-on operations. They still share the division of labor, but both espouse the same philosophy for success—it is their code: Hot consistent product from the kitchen, a clean restaurant and fast, friendly service. That, and their faith in God, drives everything they do.

The carhops are the staple of the business’ fast and friendly service. It is a job that has inspired a great deal of loyalty on the part of the employees, many of whom are also family members. Chelsey Farrell Remillard, Mic’s daughter, has been working at the family business for nearly sixteen years. She is enthusiastic about the job, which involves not only waiting on tables, but running back and forth to the cars outside, even in the winter. “Sure, it’s slippery,” she said. “I have put a few rear-view mirrors at risk! But it’s what you sign up for, and you’re actually not outside very much. I’m used to it now.”

Steve emphasized that maintaining a family presence is important to them. “This is a cash business, and it is a good idea to have that reminder,” he said. Their brother, Devin Farrell, is a cook and helps out in many ways. JoAnn Farrell, Steve’s wife, is also involved. Other employees also deserve credit for helping to build the success of the business. Patty Rock and Corinne Rouleau are both cooks who have been working at McSweeney’s for more than twenty years. “They are anchors for our team,” Mic said. “How many restaurants do you know with fifteen and twenty-year employees?”

As with many small businesses that operate year-round at multiple locations, staffing can be an issue. “Working with people, particularly young people, things happen. As an owner, you have to expect to be on call in case someone can’t come in,” Steve commented. “That is certainly one of the challenges of running a seven-day-a-week business. You can’t really plan, you just have to hope everyone shows up!”

Thinking about challenges, he added, “Entrepreneurship among those thirty years old and under sometimes seems to be non-existent. Many kids wait for an opportunity, rather than creating an opportunity in the marketplace.” Mic also mentioned that business owners really need to remain aware of the political constraints that affect business ownership. “There are many things you can’t control, including regulations like minimum wages, the tax structure and cost of goods. That is why it is important to control the things you can affect—service, cleanliness and consistency.”

Owning your own business means more than just a job, particularly when it is a service-driven business such as McSweeney’s. “It is more of a lifestyle choice,” Steve noted. Mic added, “If you are going to be in this business, or really any other, you should love what you do, and do it with honesty and integrity.

What do the next five years hold for the Farrells? Perhaps a resurgence of the food truck? They are playing their cards close to the vest for the moment, but there is talk of another location opening in the near future. “The intention is always to grow,” Steve said with a smile.