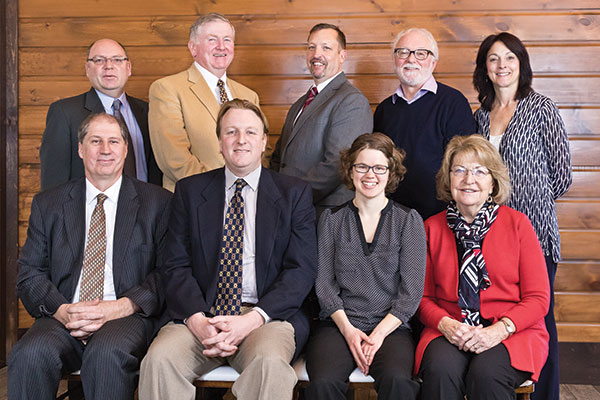 First we sipped co ee and chilled, pulpy juice, then lled our plates with fresh-cut fruit
and scrambled eggs, a bagel or a bun, and a few sausage links. As we relished breakfast
by the re in the early-morning warmth of the wood-paneled Adirondack Room at the Butcher Block, the consensus at Table 2 was that overall, 2015 was a good year. While confronting the constant challenge of economic opportunity for North Country residents, panelists from the government, business, education, retail/hospitality, and public media sectors shared their recent milestones and discussed strategies for 2016.

Jay Lebrun, Associate Superintendent, Plattsburgh City School District
“Managing a school district can be similar to running a business,” said Jay Lebrun as he completes his eighth year as an administrator in the Plattsburgh City School district. “We have 400 people employed, and handle a $40 million budget to educate over 1,950 students, grades PreK-12. We are proud of our role in the local economy.

“Our district has stabilized after a period of intense challenge,” continued Lebrun. “The Smart Schools Bond Act initiative, passed as part of the 2014-2015 Enacted Budget, is very exciting. (New York State is investing $2 billion in its schools to finance educational technology and infrastructure so that all students can have access to the latest tech- nology and connectivity needed to succeed and compete in the global economy.) “We are in the process of writing this grant. The proliferation of one-to-one technological devices (smart phones, laptops, iPads, and tablets)—great socioeconomic equalizers—is daunting. We need to see that our students have access to these for learning, and teach them how to be responsible cybercitizens.”

More important than technology, safety is of paramount concern in every school district. Lebrun emphasized, “Although there is no such thing as absolute protection, we partner closely with the police— many of whom have children in the district—so that we can keep our schools safe, open and inviting. In addition, schools invest more now in social and preventative services than they ever have. It is a big part of our operation. To this end, school counselors are closely connected to the police officers who work with our students.”

Over the past few years, Lebrun and other school administrators, have noticed more fluctuation in the student population. “Students are more mobile than they’ve ever been. At a moment’s notice, 25% of the students we’ve invested in for years can be gone, often to a neighboring district, and replaced with different students – -who may also be from neighboring districts, another state or another coun- try. How can we better serve our communities?”

Senator Betty Little, New York State Senator, 45th District
A lifetime resident of Glens Falls, Betty Little is serving her seventh term representing over 300,000 residents in Clinton, Essex, Franklin, Warren, and parts of St. Lawrence and Washington counties. With a district the size of Connecticut, and the Adirondack Park right in the middle, Little must strike a delicate balance between the need to create and sustain employment for year-round residents and the environmental restrictions and concerns of our precious wilderness.

“There are lots of jobs in the Plattsburgh and Glens Falls areas,” shared Little, “but with the 102 towns located within the Adirondack Park, a big challenge is to stimulate the economy and provide jobs while also protecting the environment.” Knowing that connectivity is literally a lifeline for people who live in remote areas, Little stated, “Cell phone coverage is a necessity. Enhanced broadband service is also needed so that all North Country constituents can have qual- ity Internet access.”

As a parent of six and a dedicated long-term public servant, Little is deeply interested in educating the young people in her district and providing the opportunity that will get them to stay. “How can we get parents involved in the schools?” asked Little. “And how do you teach students how to present themselves in an interview and later, on a job site? We need more year-round residents in the North Country.”

Erik Nycklemoe, President and CEO, Mountain Lake PBS
Mountain Lake PBS serves four million people throughout New York, Vermont, Quebec, and Eastern Ontario with high-quality commercial- free programs. In addition, it goes beyond broadcasting with a robust online presence as well as events and educational outreach in the com- munity.Succeeding Alice Recore, who retired in December 2014, Erik Nycklemoe drew on his experience serving communities through pub- lic media organizations such as the American Public Media, Minnesota Public Radio, and Pacific Public Media as he stepped in to lead Mountain Lake PBS as broadcasting evolves and expands to digital content creation.

“We are finding a lot of success in the response to our new digital and mobile content,” shared Nycklemoe. “People want to watch and listen to public media programs like the ‘News Hour,’ ‘Masterpiece,’ ‘All Things Considered’ and other programs at a time, and on a device, that is convenient for them.”

“More than 60 percent of our membership revenue comes from our Canadian supporters” said Nycklemoe. With such a high per- centage of Canadian members, Mountain Lake PBS has also been looking for ways to better serve viewers in the Montreal market. To this end, Mountain Lake has been conducting listening sessions in Canada, and collecting information on the tastes and interest of our Quebecois neighbors. “People from the North Country want to know what’s happening in Montreal and Canadians want to know what’s going on in the North Country and Adirondacks and that is what we intend to do,” said Nycklemoe.

Mike Carpenter, President and CEO, The Northeast Group
In business for 30 years, The Northeast Group is a printing, mailing and distribution company servicing an international customer base from its four facilities in Plattsburgh. It offers more than 350,000 square feet of production and warehouse space as well as printing, graphic design, and mailing services. In addition, Northeast has also published Strictly Business, a magazine for and about business in the North Country, for 26 years.

“Most people know us as a printer and magazine publisher, but we’ve also done third-party logistics for 20 years,” said Mike Carpenter. (Logistics is the coordinated movement of people, goods, and equip- ment from one place to another.) “People need logistics and, due to our services and location near the border, this gives us a niche in the Canadian market. Our business has grown steadily, and con- tinued to in 2015.”

Like Mountain Lake PBS, Carpenter is cognizant of the Canadian con- sumer. “We are heavily dependent on the Canadian market. If we don’t cater to Canadians, we’re making a big mistake. It’s all about space. And the changing Canadian dollar has shown no effect on our business.”

Patrick Bowen, Finance Manager, Town of Plattsburgh
As he completes his third year as Finance Manager, Patrick Bowen is pleased with the 2015 fiscal year in the Town of Plattsburgh. “Overall, it has been a positive year in the Town,” reported Bowen. “The continued growth of new businesses and the success of existing businesses helps the Town grow. This trend should continue into 2016 with some exciting news that has been reported. In 2015, the Town experienced an increase in the construction of new homes and the addition of a new subdivision. It has also seen a reduction in sales tax revenues as compared to previ- ous years due to lower gas prices and fewer Canadian shoppers. Bowen expressed his support for collaboration between municipalities, busi- nesses and local organizations such as the Chamber of Commerce and The Development Corporation to grow the region. “The Town and City of Plattsburgh are currently working together on some great new projects and will continue to do so in 2016.”

David Merkel, Owner, Rugar Self Storage
David Merkel and his siblings were the fourth generation to operate the Plattsburgh landmark — Merkel’s Department Store. After the store closed in 1993, David operated Park ‘n Post, a mail and ship- ping business, for several years. He now owns and operates Rugar Self-Storage. He remarked that since those changes his workforce has gone from 90 employees to just one — himself.“The last two years have gone very well,” he explained. “We’ve had good occupancy. It’s interesting to see where the people locate to/from. I enjoyed running the store, but the retail market became increasingly difficult after the Base closed. This business is very interesting, and a needed service.”

Merkel sees transportation as being crucial to commercial success and the viability of the area. He is interested in ways the North Country can enhance its use of both the railroad and airport. “I’d like to see forward thinking on our train service. It could improve transportation of goods, and people could travel between the US and Canada easier. The airport is also another great resource. I’m delighted to see the current expansion in process.”

Richard LePage, People and Culture Director, Nova Bus
A native of Quebec, Richard LePage worked for Bombardier in Plattsburgh from 1998-2002, and then returned to the area in 2008 at the invitation of Nova Bus. He is delighted to be working for Nova Bus, and his family willingly accompanied him back to the North Country.

“The market in the U.S. is so huge,” stated LePage, “I don’t see why people would not be optimistic. The startup was not easy for Nova Bus, but we’re doing well now. We’re the only bus maker in NY State.”

As the People and Culture (Human Resources) Director, LePage could not be happier with the employees here. “I found the best work force here. There is a great attitude.” Nova Bus currently has a stable workforce of 400 employees.

With a nod to David Merkel, LePage advocated “more push to mass transit.” And because his family and he enjoy the quality of life here, he agreed that “We need more year-round residents.”

“We inherited a few staff members and now have seven employees — four full-time (chef, baker, farmer, and marketplace manager) and three col- lege students working part-time,” related Vicory-Rosenquest. “Conroy’s location on Rt. 9 north makes it a gathering place for locals as well as welcoming for many kinds of travelers — summertime bikers, holiday travelers, boaters, campers, and others simply driving through. We are formulating plans for other offerings as we grow with the business.”

Originally from Kansas, Vicory-Rosenquest, who also teaches at Clinton Community College, looks forward to many years at Conroy’s. “In the summertime, it’s all about our Quebec travelers. We have a really sweet relationship with them. In fact, Chris and I are learning French.”