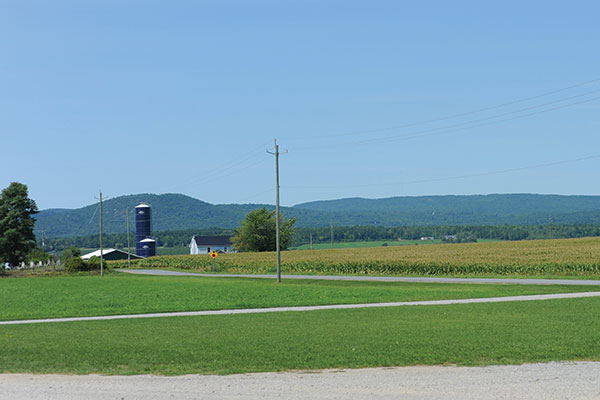 FLEDGING CROW
Lucas Christenson came to farm in the North Country by way of Ecuador, starting Fledging Crow Farm with partner Ian Ater. Christenson is originally from Minnesota and attended college in Montana. Ater is a converted city boy from Rochester who milked cows for North Country Creamery while he went to SUNY Plattsburgh. They happened to meet one summer in South America while volunteering for an agricultural project and decided if they ever had an opportunity to grow something together, they would.

That seedling of an idea spouted, and in the spring of 2009 Christenson and Ater began to tend to a little less than three acres in Keeseville and sell their harvest. Today they have more than 10 times the acreage and by 2017 they will have 15 times as much acreage as they started with.

Fledging Crow is one of the anchors of the Community Supported Agriculture program in our area and has even been able to supply other CSAs throughout New York State. While the benefits of a Community Supported Agriculture program are numerous, it can be a challenge for farmers to meet the demands of members. Finding that sweet spot between variety for customers and viability for crops can be a challenge. The figurative and literal bean counting might push some farmers to mono crops.

But not the Fledging Crow. They have embraced the challenge and have grown their crop varieties from 35 to 60 different varieties of produce. They keep one transplant house and four other greenhouses going. This enables them to push spring along when it might be a little too cold or a little too long. Christenson laughed when he recalled May of 2016. “We had the shoots in the ground and then stuck hoops in to protect the leaves from frost singe and covered them in reemay (a tissue-like cloth row cover)—it looked like we’d been invaded by giant caterpillars!”

Organic Growth
Organic farming doesn’t mean Luddite. While the farm is proud of its NOFA (Northeast Organic Farming Association) certification, the organic standards that address such factors as quality of soil and pest and weed control did not require the farm to make any changes. Those they did made were simply administrative and they are documenting things a little differently.

At the start, Ater and Christenson shared the duties, did field walks together and split most of the responsibilities 50/50. But as the task list grew, it made more sense for them to grow into their respective specialties. Ater now supervises the fields.

As they grow their business they are pushing towards mechanizing their process wherever possible. The productivity machinery offers is simply irreplaceable. That said, machines require maintenance and when they are made to work as hard as everyone else on the farms, they get run down and they break. That means more time in the shop, fixing and adapting the equipment for Christenson. “We make a great team; we are definitely yin and yang; and it’s working out great! Last week we put up 15,000 pounds of carrots.”

On the horizon for Fledging Crow is a plan to use some of their acreage to begin their own composting. Creating a self-sufficient nutrient source for their produce seems like the logical progression for the organic farmers.

ADIRONDACK FARMS
Jon Rulfs owns Adirondack Farms along with Jake Swyers and in twenty years of dairy farm- ing they have more than doubled their herd and their staff. Between what they grow in Peru and the surrounding area, they harvest from about 6,000 acres to feed their 2,500 cows. As their operation has grown, the technology they use to monitor their herd and the crops that feed them has changed.
“It’s important to take good care of our animals so they can take care of us,” said Rulfs. Currently Adirondack Farms has 50 full-time staff who help run the farm. They milk three times a day. It takes seven hours to milk the herd and then an hour to break down and wash the milking parlor. They produce enough milk to fill over two milk tankers a day. The milk is sold exclusively to Agri-Mark, the producers of Cabot and McCadam’s cheese.

Weather Tech and Bovine Fitbits
Rulfs was candid about how directly their work is tied to weather. In fact, they have a weather station on premises. “Dealing with variable weather is part of running a farm and that’s always been the case,” said Rulfs. “Take this summer for example, it’s been fairly hot and so we’ve worked really hard to insure that the herd is comfortable, making sure they have access to fresh, cool water; that there are fans blowing in the barn; that they have enough bedding and space to lie down when they want, as well as access to feed at all times.”

In addition to monitoring temperatures for the herd’s comfort, Rulfs and Swyers also use their weather station to measure “end to end” precipitation and the variability on their croplands. Take for example the most recent rainfall. Rulfs said it resulted in the fields in Chazy and Westport getting two inches of rain, whereas Peru got 3/10th of an inch; so we have to plan accordingly. We make adjustments like that everyday.”

As we took a walk out to one of the barns where the fans were blowing, Rulfs pointed out a cuff that each cow has on her front leg. These electronic monitors help them keep track of each of the animals individually. Each cow’s cuff tracks her activity level and the last time she was milked. It’s invaluable, Rulfs pointed out, because “If she isn’t moving around much, we want to find her and make sure that nothing is wrong; if her activity level is higher than normal, maybe she’s coming into season and so it is important to keep an eye on her and get her to the breeder.”

Growing Industry from Agriculture
Drawing on classic Adirondack agricultural traditions of resilience, hard work and resourcefulness, Adirondack Farms is also moving into a new venture that even makes use of what the cows leave behind. The solid waste that cows drop is collected under the barn and brought
to the farm’s own solid treatment center. At that center, the solids are extracted and the nutrient-rich liquid becomes fertilizer. Then, anaerobic bacteria breaks down the solid organic matter to produce a mix of gases, which are captured. In August, the farm invested in and installed is own generator, which, by the end of the year, will begin burning the captured bio gases to create electric power for the energy grid. All of this amounts to an impressive use of everything on the farm.