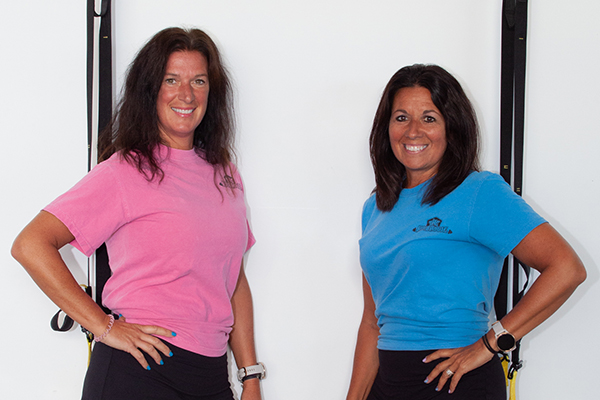 When Kathi Grabda and Krystal Lewis started planning outside workouts with some friends, they never imagined their effort would grow to become a successful fitness club with classes so popular they have waitlists. Since opening in the middle of the pandemic, The Klubhouse, LLC now has approximately 75 members and offers classes for all ages. The duo lovingly call their members The Klubhouse Family and they truly mean it.

Opening in the middle of the Pandemic

Grabda had been a trainer for 20 years and always dreamed of opening her own fitness club. When she met Lewis at a class, they quickly became workout buddies. And then the pandemic hit and gyms closed. To stay fit the two friends looked for a way to do their workouts outdoors and invited others to join them. The popularity of their classes propelled them towards opening their own studio, and all of a sudden, the fantasy of owning their own fitness club became a reality.

Having an indoor studio space was not an issue in the beginning, but as the group grew larger, Grabda and Lewis started to buy equipment and needed a place to store it. That’s when the two realized they needed to create a plan and set up their own business. Plans were constrained at first due to state regulations, but they used that time wisely to prepare a space. The Klubhouse opened first in downtown Plattsburgh, but that didn’t last long. They are currently located in the Plattsburgh Plaza close to Big Lots.

Grabda and Lewis were not sure how fast they wanted to grow because both have full-time jobs. At first, they advertised their workouts through Facebook Messenger and then eventually on Facebook itself. They also found posting in the Plattsburgh Street Team group helped get the word out.

When a friend recommended they use TikTok, they were able to reach a younger demographic. Recently, The Klubhouse launched a website and on the advice of their web designer, joined Instagram and Google. Despite their new marketing efforts, they still rely primarily on word of mouth to get people to their classes. Some members have joined after seeing them during their outdoor workouts in the parking lot in downtown Plattsburgh or at the City Beach.

Lewis is in charge of the marketing and advertising and has an eye for photography. After classes, you’ll find her working hard editing the photos and creating narratives for social media. Grabda does the scheduling and maintains the website, a crucial part of the marketing as well.

Owning a business while working full-time

The Klubhouse is the epitome of a small business where the two do all the work themselves. “We teach, we clean, we do classes, we do the marketing, and the accounting, and the finances and have full-time jobs,” Grabda explained. Sometimes members help them clean, but normally it’s just a two-woman show. “We team really well with everything we do, and we both come to the table with different experiences and different things to offer,” Lewis noted. “Kathi’s always been there for everything. I was scared at first, but now I can’t get enough of what we do and we are sharing it with others too.”

Some might suggest that Grabda and Lewis are superhuman because of all they are able to accomplish, but they are the first to admit that operating a small business is a lot to juggle while working full-time. When they aren’t at the studio, Grabda works for Border Patrol and Lewis works at North Country Kids. It has required making sacrifices at home and at work, but they put in the extjra hours and the time away from their families because they love what they do. “We do this just for fun,” Lewis said. “That’s it.”

The partners are proud to offer classes for all ages and abilities. Some of their clients are experienced, and some are approaching fitness for the first time. They are happy to accommodate all skill levels and will modify workouts to fit members’ needs. While they do not offer childcare, they do have a room setup for kids who are old enough to play on their own while their parents workout. Their classes usually last a full hour instead of the traditional 45-minutes. In addition, they offer some shorter classes for those who have limited time. They offer strength and circuit classes and even have special theme classes called a “Pedal Party” to add more fun to the workout. Last year, they bought exercise bikes so are able to offer cycle classes which have become their most popular. “It was our best investment,” Lewis offered.

During the summer and holiday breaks, The Klubhouse offers fitness classes for kids. They have been very popular with up to 30 kids a session, which Grabda and Lewis attribute to the excitement of being able to do group activities again after the pandemic. “The goal is to get the kids interested in fitness. They don’t know if they are playing or working out, it’s all just fun,” Lewis observed. Between the snowball fights during winter and the water balloon fights during the summer, the parents have their fair share of fun too.

While the friends care about promoting all types of fitness for all ages and abilities, their primary goal is to just have fun. They love to be goofy and be themselves during class, which has helped create a welcoming environment. Members feel like family, especially when the owners reach out to them when they miss too many classes. “Often, they may just be on vacation, but at other times it makes a difference to let them know we are thinking about them. Most people who come here, stay here,” Lewis said, “Because we’re family.

The Klubhouse is truly a work of love. All profits have been put back into the business for improvements. “We truly love doing this. It’s a ton of fun. It’s a lot of work for us, but we enjoy spreading the fun of fitness and group workouts to everyone we can,” Lewis concluded.