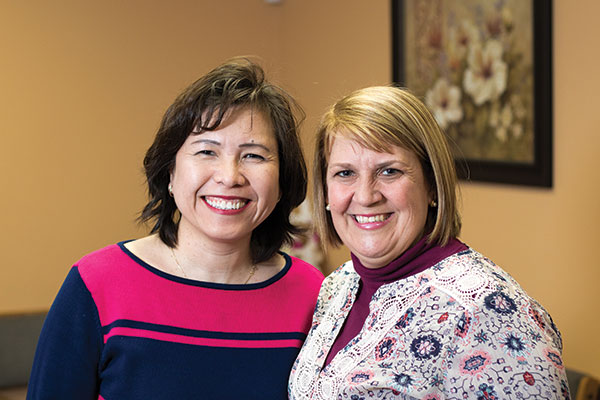 Ask a sampling of baby boomers whether they’ve ever had a female dentist and chances are many will say “No.”

Dr. Chi Vu and Dr. Martha Breyette of Lake View Dentistry in Plattsburgh, both saw that lopsided gender balance at their dental schools, where only about a third of the students were women. Vu earned her dental surgery degree from the Medical College at the University of Virginia in Richmond in 1994. She recalled having only one female instructor.

Breyette earned her degree in 1997 at the University of Pennsylvania in Philadelphia, where she recalled a clinical professor who always assessed female students last. “He was always very fair in grading us, but in the clinic, my girlfriends and I would watch him go to all of the male students first before coming to evaluate our work. We just seemed to be put on a back burner.”

Both have been mistaken for hygienists. During her graduate residency, Vu recalls most people asking, “Are you here to clean my teeth? Am I going to see the doctor later?” Breyette heard, “Oh! You’re the doctor?” Sometimes that ‘Oh!’ was a little light bulb moment for patients.”

Vu began practicing in 1995, right out of dental school. She moved to Plattsburgh from
Virginia, where her parents and extended family still live, seeking a community that was close to her Canadian husband’s family in Montreal. She joined another dentist’s
practice, and in 2007, bought it.

For Breyette, the North Country is home. She was born and raised here, with
family in Saranac and Dannemora. Although she graduated from dental school
in 1997, she left dentistry for a time and got to know Dr. Vu initially as a patient
when both she and her daughter came to Vu for dental care. Their conversations
about Breyette’s experience in dentistry played a part in Breyette’s return to the
field. Four years ago, she joined Dr. Vu at Lake View.

While their practice may still be a statistical anomaly, breaking gender barriers doesn’t seem to phase Drs. Vu and Breyette—they’re both more interested in the day-to-day challenges and rewards of patient care. They see patients ranging in age from 3 to 85, a lot of them families—sometimes whole families at the same time. “Dr. Vu will see one spouse; I’ll see the other and the hygienists will be working on the kids,” said Breyette. “It’s a family practice.”

“The most positive feedback I’ve received is that I treat children as if they were my own,” said Breyette. “We see a lot of children. We use different terminology, we use distraction techniques, we tell stories. I even sing (not that I’m on key) because it helps the process. I’ve had a lot of parents say, ‘It’s nice to see someone so gentle and caring.’”

Biggest Influences: For Dr. Vu, it was her uncle and a childhood dentist. For Dr. Breyette, it was an undergraduate job shadowing experience—and Dr. Vu.

At 12, Dr. Vu came to the United States as one of the boat people who fled her country after the Vietnam War. Her uncle was an employee of the U.S. government, and after being evacuated from the country in 1975, he sponsored Vu and her aunt, who escaped by boat and traveled through Thailand to the U.S., leaving Vu’s parents and siblings behind. Vu’s uncle and aunt served as her foster parents during her teen and college years. When she became a U.S. citizen in 1992, she was able to sponsor her parents and siblings and bring them to the States—a process that took nearly nine years.

Dr. Breyette always knew she wanted to do something in the medical field, she just didn’t know what. “When I was at St. Michael’s College, I shadowed both a female doctor and a female dentist, and I applied to both medical and dental school.” She was accepted to both. But it was shadowing the female dentist that swayed her.

Favorite Part of the Job: For Dr. Vu, it’s being able to relieve pain. “When someone comes in with a toothache and they can’t sleep, giving a treatment plan and watching it solve the problem—that’s rewarding. They can eat and sleep again. I like talking to them a few days later and hearing that they’re feeling better.”

For Dr. Breyette, it’s the interaction. “You’re going to see multiple patients each day, and each one is different, so it’s always a challenge. You’re not sure if you’re going to be doing a filling or a crown or a root canal or an extraction, but for each one, you’re trying to make sure the patient is comfortable. It’s just interacting with the people. The people that I work with are my friends, too. And patients are so grateful.”

Outside Interests: Family and balance play a big role in both dentists’ lives. Dr. Vu has two children, a son in college, and a daughter who will graduate from high school this year. “When I have time,” she emphasized, “I love going hiking and walking and reading.” She also enjoys the quiet of a small community, but loves having access to the big city in Montreal.

Dr. Breyette volunteers for her daughter’s figure skating organization. “When I’m not carting my daughter around,” she said she’s found time to take up rock climbing and has joined a running group. Like Dr. Vu, she loves being outside.