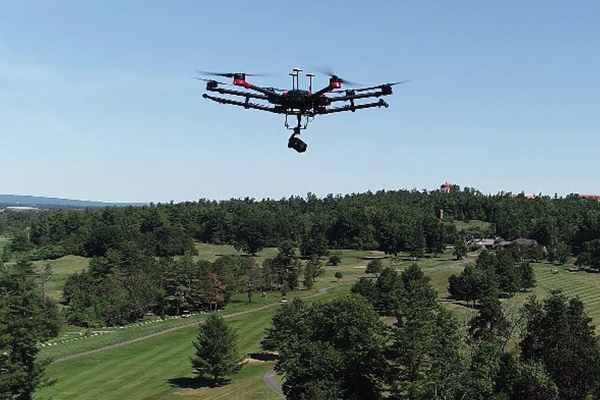 There is an old saying, “Never mix friendship with business.” There may be some truth to that but maybe friendship combined with passion for a product or service is crucial for success. Think Steve Jobs and Steve Wozniak, Bill Hewlett and David Packard, Ben Cohen and Jerry Greenfield, or Richard and Maurice McDonald. Or Brian McBride and Greg Dew.

McBride and Dew are North Country natives who have been friends since elementary school. “We met in third grade at Peru Central School,” McBride explained. Now, after successful careers apart, they have come together on a new project: Northeast Geospatial.

McBride spent the last 44 years working at Bill McBride Chevrolet and Subaru before pursuing this new venture. “I felt it was time to move on,” he said. (The dealership transitioned to the new ownership of the Della Auto Group in April of this year.) “I’ve been in the automotive business most of my life but I’ve always been technically oriented,” he said, reflecting on his natural interest in exploring new technologies and trying new things.

During the past decade Dew worked part time inspecting homes and businesses but wanted to go out on his own. That’s when he reached out to his old friend. “I approached Brian with an idea I had to use drones to do inspection work,” he said. McBride, who had begun dabbling in drone work as a hobby while he was still with the McBride dealership, was intrigued. He thought the idea over and then upped the ante and suggested many more applications for the project. “The drones are a very sophisticated computer platform,” said McBride. “The technology has reached a point where it merges computer processing power, software, GPS guidance systems, inertial navigation systems. They are able to put together a flying platform to do some pretty amazing things.”

McBride and Dew have leveraged their knowledge and research and are now in the education phase of their business startup. “We’ve been knocking on doors and talking to business owners and members of the community to explain our capabilities,” said Dew.

“Up until the last few years, the only way to get a bird’s eye view of something was by airplane, helicopter or satellite,” said McBride. According to the partners, a drone allows them to get within 400 feet of a targeted object in a more cost-efficient way than previous options, such as sending a climber. The use of a drone doesn’t put an individual in harm’s way, saves time and costs much less. The drones used by Northeast Geospatial are able to be flown manually or in pre-programmed flight patterns.

Once a drone is within range of its subject matter, the level of precision in its data collection is unmatched, according to McBride and Dew. “With the high-resolution photographic equipment that is on board the drone, we can aggregate large amounts of data in short periods of time, and we can do it with 100% safety,” said McBride. “So, you have a climber who is going to climb up this thing and it’s going to take them a full day to do it,” said Dew. “We can do it in under an hour. Not only does a climber have to climb the tower but he’s got to manually take pictures. We take the liability out of the whole process. Plus, we can do it at a fraction of the cost.”

Dew referenced their impressive list of equipment, which includes a 30x optical zoom camera that can be mounted on their drones. “We can take serial numbers off components that are completely clear,” he said. According to Dew, they have the capability to take video footage in 4K.

Depending on the project, Northeast Geospatial has four different vehicles to choose from: a hexacopter, quad drones, a flying wing with multi-spectral camera, or underwater ROVs (i.e. remotely operated vehicles). Using the flying wing, they have successfully collected data on over 2,000 acres of land in only two days. Using an underwater ROV, they are able to collect data 500 feet below the surface for up to six hours. Most human divers will limit their dives to around 30 minutes. The underwater ROV is set up with high-quality camera equipment and a mechanical arm for manipulating objects underwater, as needed.

“There’s a technology called photogrammetry,” explained McBride. “It is the science of taking overlapping photos and processing them with software. From that we can extract data out of the photographs and create three-dimensional models of an area. The models are accurate to within one centimeter of the actual size of the area and/or objects imaged.” Many of Northeast Geospatial’s 3D models are produced with fewer than 30 minutes of drone flight time and approximately five hours of data processing time. Consequently, a job that may have taken weeks or months in the past can be completed with a high level of accuracy within a single day.

While McBride and Dew are both FAA certified drone pilots, they are not certified surveyors. Their work supports the data collection process that can then be passed off to a licensed surveyor. engineers, architects, and contractors.”

On Tour To Educate

McBride and Dew are currently conducting an educational tour to provide free demonstrations and educate the community on the services they can provide. “We’ve done a few free Lunch-n-Learns with businesses in the area and are eager to do more,” said McBride. “We’re a solution in search of a problem,” said Dew.