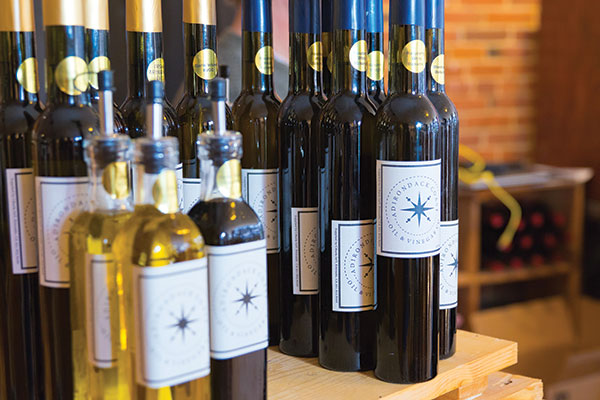 There is an inescapable irony in the path forged by Natalie Peck since she arrived in Plattsburgh over a decade ago. Originally from Wilson, Kansas Peck traveled east in 2002

to find a job in academia. A biology major at Wichita State, Peck pursued two Master’s degrees, an M.A. in the History of Science and an MLIS in Library and Information Studies at the University of Oklahoma. She has been employed by SUNY Plattsburgh since her arrival in the North Country, first as a reference librarian at the Feinberg Library, with its required adjunct faculty role teaching the college’s library research skills course. She later moved to the Office of Institutional Advancement and a position as the Director of Development Information and Research.

Peck remembers feeling welcomed warmly by the Feinberg staff. “The department is small and everyone was close. It was easy to get to know people and there was a real sense of community,” recalled Peck. Acclimating to North Country winters and the drastic change in geographical layout was another story. “Polar vortex” was never a part of her vocabulary until recently, but a series of small serendipities set her on a parallel path. A North Country transplant who grew up in the nation’s breadbasket with no prior knowledge of farming can these days be found riding a tractor through her very own vineyard and acting as vintner for the The Champlain Wine Company.

The Vineyard
In 2004, Peck met her future husband, Colin Read, when he arrived to serve as dean of the School of Business & Economics at SUNY Plattsburgh. Originally from Vancouver, British Columbia , Read had come to the North Country after fifteen years at the University of Alaska at Fairbanks, where he was a faculty member and associate dean. “Colin is a whirlwind kind of guy,” observed Peck. A small plane enthusiast, Read had his pilot’s license and had purchased property in the Town of Mooers, in northern Clinton County close to the Canadian border. He had been toying with the idea of a private landing strip on the unused forty acre property. With both Read and Peck working at the college, commuting from Mooers became a chore and the couple opted for a home on the lake closer to the city. The landing strip idea was shelved and they daydreamed about using the acreage for growing corn.

Traveling on Route 9, Peck routinely passed the hardy grape vines of Rob McDowell until one day a light bulb went on. What about growing grapes on the property in Mooers? It was a shot in the dark, but Peck took a day-long Cornell Cooperative Extension course on grape growing in the region and with an immediate thumbs up from Read they jumped into it. In 2008, the couple planted 1400 vines of Marquette, a hybrid grape developed by Peter Hemstad at the University of Minnesota Horticultural Research Center. Marquette, released in 2006 and approaching its tenth birthday, crosses European vinifera grapes with cold hardy and more disease resistant grapes able to withstand the region’s coldest temperatures. Subsequent plantings of grape varieties La Crescent, St. Croix and Prairie Star followed in 2009, and St. Pepin, Frontenac and Frontenac Gris in 2010. The couple’s initial intention was to sell the grapes locally.

Although the grapes are cold hardy, it can still be a challenge to grow them successfully in the North Country. “There is a micro-climate in the Finger Lakes, or lake effect, that has a positive influence on the terroir, the multitude of factors that affect the character and quality of wines made in that region. Not so at the vineyard in Mooers. It is far north, and far from the lake so temps can dip to minus thirty or forty degrees,” explained Peck. The polar vortex of 2014 posed great challenges for the vines. “Vines normally go into dormancy in the winter months. The extreme cold and then warm temperatures that winter, waking the vines up and then pulling them below freezing, had the potential to damage the vines, which it did in some cases.”

The Winery
As Peck and Read settled in to wait for their vines to mature, typically five or six years with the varieties they planted, they had time to look around and see what other folks in the region were doing with their grapes. The Adirondack Coast Wine Trail was in its infancy, but was beginning to grow as one winery after another gained commercial status. The first to go commercial was Stone House Vineyards run by Phil Favreau and family. Peck saw a natural progression to wine making and began learning the ropes, studying for a year with Dan Vesco of Vesco Ridge Vineyards.

“Colin built the winery, which houses fourteen stainless steel vats holding 250 gallons each,” said Peck. They bottled their first wine in 2010, supplementing with grapes grown in the Finger Lakes. The New York State Liquor Authority only allows for the purchase of grapes grown in New York, although Vermont winemakers can buy grapes from New York. “At first I was a little apprehensive about the bottling part, but it went well. It was really exciting to take part in the whole process, and then I was just really tired because we had so much to bottle!” said Peck.

For someone new to the art and science of winemaking, Peck is definitely well-versed in the language. “I want the grape to be itself,” she said. “I make the best grape that I can. The higher the quality of the grape I produce, the best-tasting wine will be the result.” She adds, “I want to make wine in the best way that suits them (the grapes).

Recent medals won at the Finger Lakes International Wine competition would attest to the fact that she is doing just that. The com- petition is vast, with over 3,900 entries from fifty states with 70 judges, many world class sommeliers and oenophiles. Peck’s 2014 Full Sail White, made with a blend of La Crescent, St. Pepin and Prairie Star grapes won the Gold Medal. Cabernet Franc in the form of her Compass Rose won the Silver.

The Champlain Wine Company
With the winery in Mooers located so far off the beaten path, Peck knew they would have to take their tasting room off-site. “Colin has always been a supporter of the down- town Plattsburgh revitalization efforts and knew another new business would be a good move for the area,” explained Peck. The first satellite location for The Champlain Wine Company opened in 2010 at 8 City Hall Place, a cozy, railroad style space with exposed brick. Within three years they had outgrown the small space and number 30, a few doors down, had become available. The space was so large in comparison they wondered how they would fill it. Read created a non-profit entity, 30 City, allowing local groups to use the space when available for free. “The shop is his baby,” said Peck. “I’m the boss at the winery and the vineyard; he is the boss at the tasting room!”

Since its creation, 30 City has hosted Women on Wheels (a local cycling club), Reading Between the Wines book club (of which Peck is a member), SUNY Plattsburgh’s Poetry Slam and BFA student exhibit and live music series Plattsburgh Blues & Jazz (PB&J). Its walls are used as a changing gallery for the work of local artists. “Our location also acts as an informal visitor’s center,” added Peck. “Tourists and locals alike will often drop in to find out what’s going on in the area or to ask directions.”

Future plans
Peck’s life now revolves around three tasks: growing the grapes, making the wine and operating the retail location on City Hall Place. Each component is a huge undertaking requiring a concise skill set, but she puts the greatest importance on the growing process. She hopes to achieve a vertically integrated business model, where the supply chain of a company is owned by that company. “Grow what we sell” is the motto. “I want the vineyard to support the winery, and I am hoping I can make that happen,” she said.

The Champlain Wine Company was the last of the current local vineyards to become commercial. As a member of a very new regional industry, Peck commented on the burgeoning wine trail. “It is a great community. We all help each other.” Members all attend conferences and continue educating themselves on the process.
Peck hopes to branch out and add a maple wine and an apple wine, using local ingredients. Four new acres have been cleared at the farm in Mooers and she likes the idea of an apiary. “It’s a blank slate,” she added. Winemaking supplies will be offered at the tasting room in future months and she hopes to increase production and storage capacity. “As a small farm winery, we currently produce approximately 5,000 bottles per year, but it fluctuates.”

Peck explained, “This is one of the most beautiful places to live in the U.S., especially as spring turns to my favorite season here, summer. I went hiking recently on Rattlesnake Mountain and was rewarded by a magnificent view of Lake Champlain and Willsboro Bay. Every summer I feel so grateful to be able to work outside in the vineyard in this incredible place. My passion is being out in the vineyard. I am getting more comfortable. If something happens, I can figure it out. I can wrangle the vines, make big decisions, and that will continue to come with experience.” She added, “Now I’m a farm girl!”