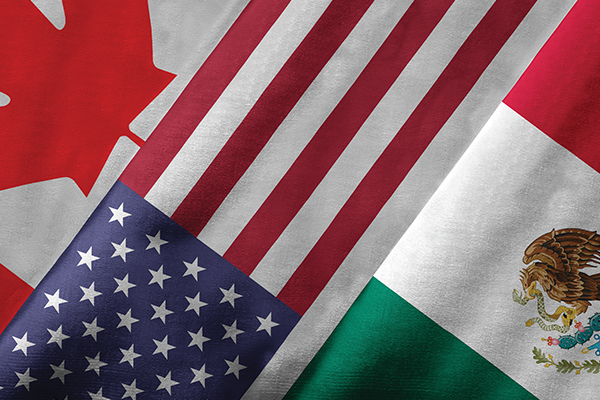 The North American Free Trade Agreement, known as NAFTA, was signed by the United States, Canada and Mexico in 1994, creating one of the world’s largest trading blocs.

The momentum began with President Ronald Reagan, who made the idea of a common market patterned after Europe’s successful venture part of his 1980 campaign. In 1984, Congress passed the Trade and Tariff Act with Canada, which built upon and amended a prior Trade Act of 1974.

President Bush, President Salinas and Canadian Prime Minister Brian Mulroney negotiated what became NAFTA. Each submitted the agreement for ratification to their respective legislative bodies in December 1992, but NAFTA faced significant opposition in both the United States and Canada based on the concerns of organized labor and environmentalists. Once two side agreements were added to address the concerns, all three countries ratified the agreement in 1993. President Bill Clinton signed it into law and it became effective on January 1, 1994.

Passage of NAFTA resulted in the elimination or reduction of most barriers to trade and investment between the three countries. The majority of economists believe NAFTA has been beneficial to North American markets and withdrawing from it or renegotiating it in a way that reestablishes trade barriers would adversely affect the U.S. economy and cost jobs.

Despite strong support, President Donald Trump sought to replace NAFTA soon after he took office in 2017. After a year of often times acrimonious negotiations, agreement was reached in September of last year to replace NAFTA with the United States Mexico Canada Agreement (USMCA). The accord was signed by President Trump, Mexican President Enrique Pena Nieto and Canadian Prime Minister Justin Trudeau at the G20 summit in Buenos Aires in November 2018. NAFTA will remain in effect, pending the ratification of the USMCA by each country’s legislative body. Mexico has confirmed the agreement and hopes are high for confirmation in both the U.S. and Canada by year’s end.

USMCA: GOOD FOR THE NORTH COUNTRY AND THE U.S.

On a cold day in November I met with North Country Chamber of Commerce president Garry Douglas in his antique filled office to discuss NAFTA/USMCA. Who better to explain what brought us to this point and where we hope to go from here?

As our discussion began Douglas gave a ringing endorsement of the North Country’s relationship with Canada. “Trade is the most powerful influence for good and for human advancement in global history,” he said. “Nothing is more important to our economy – present and future – than our economic integration with Canada. NAFTA did not make that happen. It recognized what had been happening was a good thing and helped to move governments out of the way so it could continue to happen. The outcome of NAFTA has integrated our area, more than any other in the U.S., with the economy of Canada and particularly Quebec. That means that anything that causes heartburn in Quebec, causes palpitations in the North Country.”

Douglas explained what brought the U.S., Canada and Mexico into the renegotiation of NAFTA. “It all stemmed from the 2016 election’s rhetoric. We saw what was and is a collapse in consensus around the fundamental benefits of free trade. During the presidential campaign Donald Trump called NAFTA, ‘The worst agreement the U.S. ever made.’ He said the country was losing under NAFTA and he was going to fix it or get rid of it. At the same time Hillary Clinton and Bernie Sanders were saying the same things, and so we came out of the election with a message and a tone that NAFTA was bad. We, here in the North Country, know that is not true but those sentiments became part of the environment. Since the U.S. was the gorilla in the room, it was impossible for Canada and Mexico to refuse to enter into renegotiations.”

While Douglas believes it was time for a reopening of NAFTA, he considers what transpired next as a major lost opportunity. “What we would have preferred was a positive approach — a recognition of how much our three countries had accomplished under NAFTA and a commitment to take a fresh look at some of the impediments that remained. Instead, the U.S. came into the negotiations saying, ‘This is a bad thing. We need to fix all the things that are wrong with it.’”

According to Douglas, economic developers in the North Country had never experienced a period like they did from January through fall of 2018 when negotiations were taking place. All the negative news reports and Tweets and insults created a cloud of uncertainty. “In spite of a booming U.S. economy and a growing interest on the part of Quebec businesses to invest in the U.S. market, everything froze,” he explained. “Companies decided to wait and see how the negotiations played out. Our phones stopped ringing. Participants stopped coming to our “Doing Business in the U.S.” workshops.”

On October first of last year, when the announcement that a new agreement had been reached, there was a tidal wave of interest unleashed that continues. “The uncertainty was over,” Douglas explained. “The content of the new agreement was less important than having an agreement. Business does not like uncertainty. Now we need to have USMCA finalized and approved. Without that we could see an abrupt slowdown in this area as Canadian investors rethink their plans.”

As we discussed what is in the USMCA I asked Douglas what he would like to have seen included. His response was “Labor mobility. Wouldn’t it have been great if we could have loosened some of the restrictions or, at the very least, identified more professional categories that would have helped companies move people across the border to service both U.S. and Canadian operations. But with the angst over immigration, that and other things got lost.”

As we wrapped up our conversation, I asked Douglas if the pending impeachment process could freeze action on the USMCA. He paused for a moment and then observed, “There have been a lot of meetings between the House leadership and Mexico and Canada to be sure each country will implement the provisions it has agreed to. Strong enforcement is critical to the success of this agreement. It looks like we are close and we will get there but it is entirely up to House Speaker Nancy Pelosi. If it is not approved by the end of December, it puts it into the election year and politics might keep it off the floor. There is reason to be concerned but there is also reason to be optimistic. At this point no one is saying they don’t want to do it.”