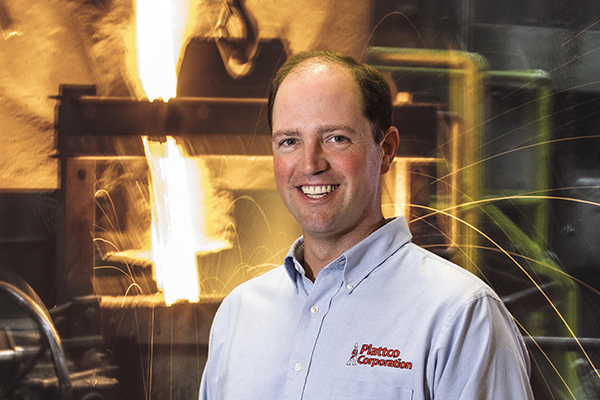 There is a quote making the rounds on LinkedIn—featured in a photo of a nondescript stairwell where on the wall are printed the words, “The most dangerous phrase in the language is, ‘We’ve always done it this way.’” The phrase is attributed to Grace Hopper, a rear admiral in the U.S. Navy and pioneer in computer programming who was known for being more interested in the future than the past.

As Plattco Corporation approaches its 120th anniversary as a leader in industrial valve engineering, its core management team takes great stock in Hopper’s sentiment. With employees in their ranks who have been with Plattco for close to half a century, a different style of manager has stepped up and assumed higher-profile leadership roles at this hidden gem in Plattsburgh. The executive management team, under the direction of CEO Douglas Crozier, now strikes a very healthy balance between experience, tenure, and tribal knowledge with new energy, talent, and outside perspectives.

Local “kids” Bob Bourgeois, Michele Derrigo-Barnes, Danielle Howard-Ross, and Kevin Guay have applied their 21st-century education and expertise to the business’ core foundation. Together, with their dedicated teams, they elevate Plattco’s stature in this community and continue to secure its rightful place in the world market, all while honoring the institution of Plattco, its founders, and the lifelong dedication of so many who came before and are still working today.

Plattco was first established in 1897 as a gray iron foundry on White Street in Plattsburgh. It manufactured drainage castings, stock valves, and other machined castings for regional industries like paper and mining. In 1960, Plattco invented the first Double Flap Airlock Valves, which eliminate leakage of dry material in many places, including in the mining industry, where it was originally used in sintering, pelletizing and handling of the cement clinker.

If sintering and clinker aren’t familiar terms to you, you’re not alone. Maybe even the name Plattco is unfamiliar, or maybe you know the name, but aren’t sure what Plattco is, what it does, or where it is, but today its valves and slide gates are used in hundreds of industries and thousands of applications.

“We have a lot of longevity here, and people are genuinely interested in what Plattco does because they’ve driven past it or seen the sign (we’re right behind Bobby’s Lounge and near Bazzano’s),” said Howard-Ross. “But they don’t know what the heck we make and they don’t have a reference point of where our product would actually be used because we don’t sell a lot of our product locally.”

Plattco has more than 1,000 end users across the country and around the world, with 30 percent outside the United States and Canada. “There are companies all over the world that use our product to handle their product,” said Bourgeois. “We deal with so many different industries. In the same week I could visit customers who are manufacturing potting soil, kitty litter, nickel, steel, plastic, or cement.” He said that every trip to a new customer is like watching an episode of “How It’s Made” in real life.

Bourgeois acknowledged Plattco’s place within the international market. What sets Plattco apart, he said, is the on-site research and development lab, test silo, and the support of an entire team of technology engineers and manufacturing experts to stand behind the product.

This modern adapt-and-respond system allows Plattco’s sales and engineering teams to collaboratively engineer products using feedback from the end user along the way, all the while providing customers with well-documented, formalized testing and data, and the ability to model and prototype on-site.

“Collaboratively developing it with the customer is key,” said Guay. “You can make anything you want, but it doesn’t mean anyone is going to buy it. When you bring the customer into the process, it changes the way the product is perceived.”

Bourgeois said this is the single biggest change he has witnessed in the last decade at Plattco. And it helped him land two of the top three largest sales in the company’s 120 years of business. In fact, Bourgeois and Guay are responsible for landing the three top projects in Plattco history. One of them is currently in the works at a high-profile nickel plant in New Caledonia (a French protectorate in the South Pacific, about 750 miles east of Australia). Back at home in the foundry on White Street, Michele Derrigo-Barnes keeps the entire operation running smoothly. In her 12 years at Plattco, she has helped to expertly guide the company from an attitude of “We’ve tried that before and it’s not going to work” to “It’s going to work and we’re going to come up with the process to get us there.”

To successfully implement change, Derrigo-Barnes attacks problems from within using 5S and Kaizen projects to continually improve processes and eliminate waste inside her systems. She involves employees from every department to pool ideas and ultimately increase efficiencies based on their ideas. “They’re the ones who are knowledgeable in their own areas. Why would we not call on them?” she asked. “When you get people involved, that’s when you can see that change isn’t scary.”

“We’re constantly moving priorities on the drawing and manufacturing schedule. The customer is why we’re here and we do whatever it takes to satisfy every single need. That’s what Plattco is built on and that’s a great foundation,” she said.

Howard-Ross said the success of the new management team and the new way of doing business, lies in finding a balance between the institution’s tribal knowledge and doing things the way they’ve always been done, and continually seeking process improvements while maintaining the world-class customer service that Plattco was built upon.