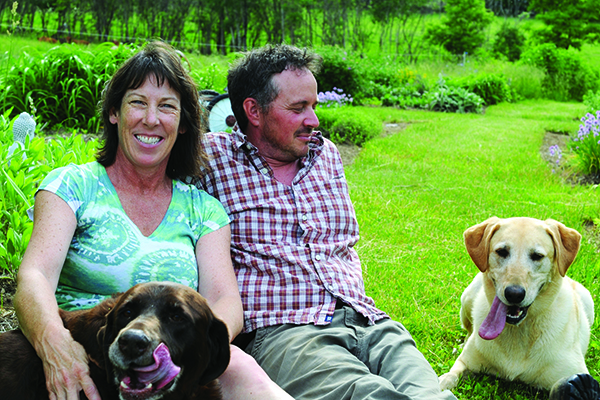 Sustainable by definition means able to be used without being completely used up or destroyed. Sustainable may well be today’s agriculture buzzword. The discussions about sustainability in relation to farming span the scope of simply adjusting lifestyles to conserve natural resources, to examining whether or not 100% sustainability is even achievable in an open system. Some of the factors that need to be brought into any discussion about sustainability are environmental degradation, the ever-changing climate, adjusting lifestyles to conserve natural resources and perhaps, most importantly, our consumption as a society. An argument could be made that if we are going to progress towards a sustainable paradigm we need to embrace aspects beyond simply where we get our vegetables.

Enter the Shady Grove Farm and Wellness Center operating since 2006. The farm sits back from State Route 22B on 40 acres of land, roughly half is devoted to farming and pasture the other half is for- est. Francisco Braun, one of the owners is also the manager/builder/ designer/farmer. His bride, Karen Bouchard-Braun manages the Wellness Center. Karen earned her Master’s degree in physical therapy in 1990 and had been exploring the relationship between the balance of body, mind and spirit in the promotion of overall wellness as a senior physical therapist at HCR Homecare. In addition to being a physical therapist she is a certified clinical neurological specialist and a clinical instructor.

Both Karen and Francisco (also known as Chico) worked and travelled the country independently before planting their roots on what became their farm. Chico worked as a kayaker in Alaska prior to returning to the North Country. When I talked with him about his work adventures it was clear he really could be called an Adirondack Huck Finn. He has held over 100 jobs in varying capacities from kayaking to construction, farm hand to photographer. When I asked him if he objected to the term “jack of all trades” he humbly piped up with “master of none!”

When the couple bought their property it was all corn fields. Karen asked Chico to build her a house that felt like the outdoors and he did. The home sits on the banks of the Salmon River and is absolutely stunning. It is an open floor plan with bedrooms tucked into lofted corners. The walls are almost entirely glass and when you walk into the living room you really do feel like you are outdoors.

The Brauns knew they wanted control over their life and their food. They wanted to grow their own produce and raise their own meat. They soon realized that their farm could pro- vide for a small CSA and they now they offer full or half shares, eggs, meat and honey to members. Chico observed, “If I was going to raise one cow, I could just as easily raise 10; same for the pigs and chickens.

“As they listened to their community member the Brauns realized folks were receiving vegetables in their farm share baskets, but didn’t know what to do with them. That’s when Karen began hosting a series of workshop on cooking and canning that allowed her neighbors to make the most of their produce. The most recent workshop was on salad dressings and ways to dress all the fabulous greens that Mother Nature offers.

Karen, who also wanted to facilitate wellness education for the community, now offers weekly yoga classes and monthly meditation at the farm. The couple is in the midst of renovating the loft over the barn and eventually Karen hopes to use the space to offer physical therapy and massage.

As I was winding up my interview with the Brauns, Mac Forrence of Forrence Orchards dropped by. As his dog hopped out of the truck and sniffed around the high grasses we all walked up to the lettuce field to harvest Mac’s supper. Forrence made sure to let me know that he believes Shady Grove has the best produce around. When a third-generation farmer has something to say about his salad, I listened.