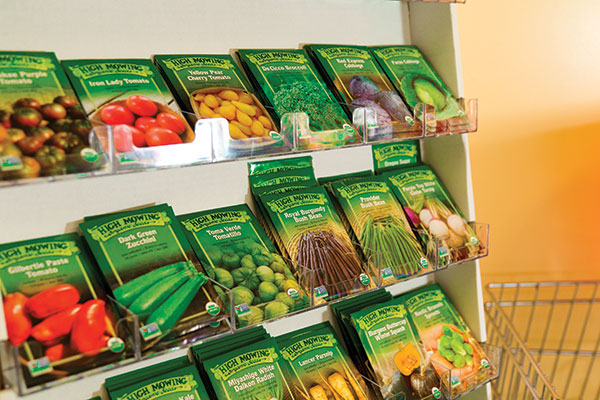 Chris Rosenquest was born in New York and raised in the North Country. He has a Bachelor’s degree in English with an emphasis on Print Journalism from SUNY Plattsburgh and an MBA in Technology from the Michael Foster School of Business at the University of Washington in Seattle. Currently he is a business advisor at the North Country Small Business Development Center and a Clinton County legislator representing Area 9.

The couple met in Minneapolis at a leadership conference and, although they lived for several years in the Seattle area, they knew that long term they would be East Coast bound. In Chris’ words, “That was always the plan. This is home. I’ve got family here.”

While Tracy and Chris were busy in their Seattle community, they kept an eye out for an opportunity to relocate to the North Country. It was on one of his annual trips home for a nephew’s graduation that an interesting opportunity presented itself to Chris. The 2013 Plattsburgh mayoral race was upcoming and he felt compelled to throw his hat in the ring. The couple moved to Plattsburgh and campaigned hard. The outcome may not have yielded the victory the Rosenquests hoped for, but the groundswell of support Chris received told the couple they were right where they needed to be. They could feel the winds of change blowing and wanted to be a part of it.

The couple knew they wanted to live their lives in such a way that they could make an impact on their community. They thought about a bed and breakfast, something in the city of Plattsburgh, something close to the college, something that would enable them to act as a conduit for tourists north of the border, or families on tour to visit the college, leaf peepers, or outdoorsmen —away for them to share all the possibilities they saw in the North Country. Alas their bed and breakfast idea was not meant to be, but they remained steadfast in their ideals and were determined to find a way to not only live here, but make a life for themselves in the community.

Just about that time Conroy’s Organics, a natural food store and café located on Route 9 north of Plattsburgh, was looking for new owner-operators and Christopher and Tracy saw opportunities. The business may have been what they were looking for all along. In 2015 they bought in. Tracy is candid and humble when she talks of the success they have enjoyed being a result, in large part, of the team they have assembled. The couple meets with their leadership team on a weekly basis. Discussing ideas, issues and problems has been a huge learning experience. “We’ve been really lucky to work with a bunch of great artisans and people we make a point to listen to. They’ve got great ideas for developing each and every aspect of the business.”

Conroys’ Organics is growing in every direction with a priority on local, natural, cost effective offerings for customers and the community. They plan to expand their livestock, doubling their flock of sheep, adding meat birds, laying hens, and a couple of pigs to the farm. They’ve also tweaked the menu at the café just a little. Bringing things in-house gives them control to introduce more local ingredients and, being hands on in the café every day, enables them to embrace feedback from customers.

Chef Jamie Armstrong is now making all their soups and quiches. Karen Davis is the in-house baker serving up fresh pastries, pies and delicious gluten free dessert options. Roy Brinker is the resident handyman and farmer and Diana Garces is the marketplace manager.

When the Rosenquests say they are prioritizing local ingredients, they mean right down to the grain — where it’s harvested and milled. They plan to shore up their grocery offerings to serve as a community resource. Expansion plans include a larger café counter and the addition of an espresso machine. They’ve slapped a bit of paint on the walls, added Rizzo, their beloved farm dog and are looking forward to the summer. They’re exploring permits that will enable them to serve some of the local wine, beer and cider they currently carry. On Thursdays they will be firing up the grill out on the deck and serving fresh lamb burgers from their own flock, grass-fed beef grown on the Conroy Farm and brats from local producers. And that’s just the beginning.

Tracy and Christopher have a great relationship with the founders of Downtown Rising and plan to have a vendor presence in Trinity Park in Plattsburgh every Friday evening, inviting locals to enjoy food, music, crafts, and all that our scenic downtown has to offer.

The Rosenquest’s five year plan? For this duo the future looks as bright as the sun- rise over Lake Champlain. Tracy and Chris are proud that Conroy Organic’s is becoming a hub for the community and they say, “Bring it on!” Chris explained, “I think of us as representing a call to action to like-minded people. Don’t just come home. Come home and grow home.”