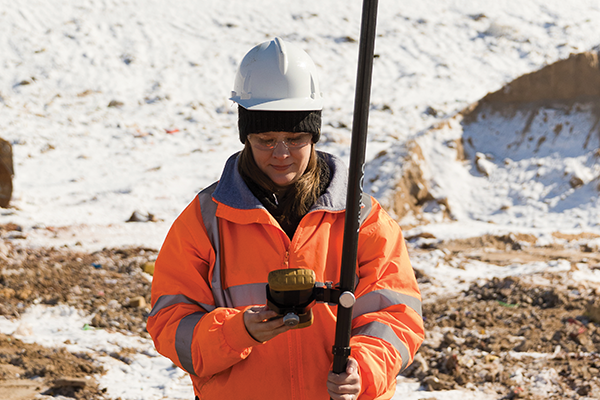 In the field of engineering, only 14 percent of licensed professional engineers (PE) are women. One local woman, Amy Davies, is working to become one of them.

For several months Davies worked in New York City for VH-1, but returned home and found work at WPTZ Channel 5 as the night master control operator. Comparing incomes with her friends who were waitresses, she found they were earning more than she was. That was when she returned to SUNY Plattsburgh to major in Environmental Science, taking classes while still working the graveyard shift at the television station.

One of her professors, Dr. Lyn McIlroy, recognized her exceptional abilities in math and science and recommended she consider the study of engineering. He advised her to take advanced math classes like calculus and differential equations. As you may recall from your own school days, calculus is the study of how things change and the effect of those changes on a system. Differential equations are useful for predicting changes like the population growth of a species or the change in investment returns over time.

At the time, Davies had no idea of what engineering was about. She explained, “Engineering was a total unknown to me.” She saw medicine, education and accounting as fields where women worked but had never considered engineering as a career.

In the fall of 2008, with Professor McIlroy’s encouragement, Davies transferred to Clarkson University in Potsdam, New York. Her liberal arts credits were accepted and in two years she had earned another undergraduate degree. While at Clarkson, she took an exam that started her on the path to becoming a PE.

After graduation, Davies held a few short- term jobs as a construction field inspector and administrative manager. She was offered jobs away from the North Country but refused them, preferring to stay where both she and her husband have strong ties. She worked as a project manager at Jeffords Steel in Plattsburgh where her duties involved fabrication, scheduling, deliveries, and acting as a liaison with customers. After four years, she grew restless and wanted to be more directly involved in engineering. “In 2017 I saw an opportunity at Casella Waste Systems and I took it,” she said.

Today her job title is Environmental Analyst and her office is at the county landfill in Morrisonville. Davies has projects all over northern New York, including a new transfer station going up in Fort Edward and a landfill in Potsdam. She also manages a closed scrap metal yard, the closed landfill in Essex County as well as a number of operating transfer stations. She is on the road frequently overseeing construction, attending town board meetings, taking water samples, and keeping all of her projects in compliance. New York State Department of Environmental Conservation is the main regulator she deals with.

Davies is happy to be working for Casella, a company she calls “technologically advanced and pro-active for women.” She is grateful for its policy of eight weeks paid maternity leave, which gave her the opportunity to be with her infant son born last October. When asked about interaction with male coworkers, she explained that people who work in the field of solid waste, as she does, are a close-knit group. Co-workers support one another, and her supervisor has encouraged her to continue her education by taking classes and attending workshops.

Amy Davies is on her way to joining a small but elite group, women who can attach the hard-earned initials PE to their names.