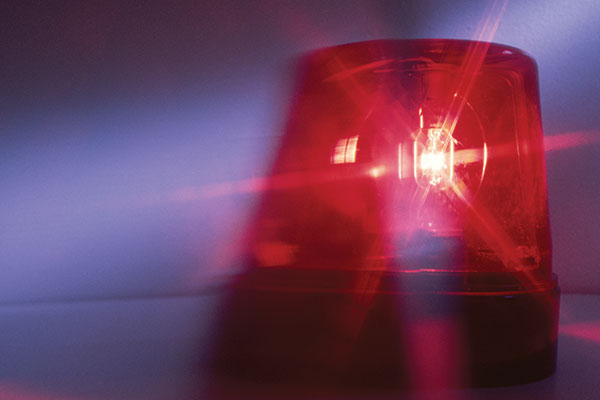 Most of us take some things for granted. Health is one of them, especially if we feel good. We’ve had our flu shots. We go to the doctor for checkups. We exercise and try to eat good foods.

But, what if there were a widespread health crisis in our area? To find out, we visited the Clinton County Office of Emergency Services at 16 Emergency Services Drive on the former Plattsburgh Air Force Base. That’s where people and equipment are dispatched and coordi- nated when there are fire and ambulance calls and other emergencies. That’s where your 9-1-1 calls go first.

A lot goes on there, even when there is no emergency. Much of it involves making sure there are plans for almost any eventuality and that people are trained and ready to respond.

When an emergency arises, there is little time to react. Hopefully, those in key positions can instinctively begin to activate resources as part of a well-rehearsed protocol. You can rest assured that Eric Day, Director of Emergency Services for Clinton County and Peggy Labombard, Emergency Services Preparedness Coordinator for the county health department are on the same page. Both are long-time professionals who have vast experience and extensive training.

The mission statement for Day’s office is “To provide the residents and visitors of Clinton County with assistance and services neces- sary for Preparedness, Response, Recovery, and Mitigation from natural and man-made disasters.”

Day has been in the director’s chair for a decade with years of expe- rience in related fields prior to that. Labombard has been a public health nurse with the Health Department since 2007 and has a great deal of previous work in hospitals and schools.

Day explained, “Our role at Emergency Services in relation to a health emergency is not a lot different than for many other types of incidents when it’s on a large scale.” He talked about the county’s Emergency Operations Center (EOC) and its role in such emergencies, “It’s a large room where we gather players from the various agencies or enti- ties that might be involved. In a public health emergency, we bring together someone representing our office as the emergency branch of the county. That person’s role is different from someone running and maintaining the EOC. Add to that people from public health, from the hospital, the sheriff ’s department, state police and others. Perhaps the county highway department would be represented along with New York State DOT (Department of Transportation), NYSEG (New York State Electric and Gas) and others. The disciplines will vary depend- ing on the incident.”

Day continued, “Those folks will coordinate and collaborate with each other so that when somebody needs something in the field they can’t get within their own agency, they can call the EOC and arrange for the necessary supplies and personnel. All the players in the EOC can talk and work toward a solution to the problem.”

He said messaging is essential, especially with public health emergencies. The EOC will make certain the messages get out. Press releases will be coordinated and there will be con- sistency in their dissemination.

There is also staff at the Health Department geared up and trained specifically for informa- tion in the case of public health emergencies. Day added that those procedures get melded into those within the EOC.

Radio, television, newspapers, and other media are used as needed to get the word out. Day said cell phones, land lines, Facebook, and all other means of communications come into play in the event of a major health emergency.

Day named Mike Cahoon, from CVPH Medical Center, as a primary health emergency partner. “Mike is another vital part of the preparedness and response for such matters.”

The county has what has been described as a Comprehensive Emergency Management Plan or CEMP. Day said it is generic and built to provide the base operation for any incident or emergency. Because of study and training almost daily, Day has committed the bulk of the plan to memory. He added, “I’ve been using it long enough to remember it. Most of it is in my head.”

The CEMP outlines what Day’s office does by way of emergency management for Clinton County in the event of any type incident. As for a public health emergency, Labombard indicated that they have written a series of detailed plans that outline specific responses and/or actions that would be taken based on any given scenario.

Day said, “If we have an Ebola incident, we know what to do. We have regular, exercises on that topic. Even though Ebola hasn‘t been in the news much lately, believe me, the threat is not gone. Besides our own plans to deal with it, we are part of the regional 17-county Health Emergency Preparedness Coalition (HEPC) with our office and the Health Department very much involved.” Labombard added, “We are further involved in the North Country sub-regional group consisting of five counties.”

Day said his office also coordinates with the political entities and said, “If an incident gets to a certain point where the public health is in jeopardy and specific actions are necessary to isolate and quarantine people, limit travel, tell people they can’t go to the mall, or other area businesses, we are responsible for getting that information out. We can coordinate states of emergency. The declaration, either by the county or the state, comes through this office.”

Labombard explained that her ultimate boss, Clinton County Director of Public Health Jerie Reid, has the power to declare a public health emergency. She pointed out that the Health Department itself has what it calls an all hazards plan or Public Health Emergency Preparedness and Response Plan. It describes how they would deal with a public health event that could affect the vast majority of the county. She said, “That could mean a medical counter measure of any sort which could be an antibiotic, antiviral, vaccine, personal protective equipment like surgical masks and that sort of thing. We also have a pandemic influenza plan.”

There are other smaller plans that all feed into the larger protocol. They try to cover any eventuality according to Day and Labombard. That includes everything from an anthrax attack to nerve agents spread by terrorists. They would need to give citizens something to prevent spread or treatment so they don’t get sick and it must be done as quickly as possible.

There are not enough antibiotics on hand presently, but the plan is to get started, use some of the hospital’s supply and contact the EOC through Day to receive more medica- tions if needed. Day would then work his way through the chain of command, taking his request to the state and ultimately tapping into the strategic national stockpile.

Labombard explained, “There are MOU’s (Memoranda of Understanding) with vari- ous places around the county where we could actually hold PODS (Points of Distribution) where we would bring as many people as pos- sible to get the first days of antibiotics if it were anthrax or to get a flu vaccine if it were an influenza pandemic.”

She continued, “We also have closed POD partners with the hospital for when we receive the medication from the state or federal folks, and get all of them taken care of. They would do that themselves after we gave them the medications. Depending on the situation, key personnel may receive the medical counter- measure first to assure the workforce is able to care for the rest of the community. Obviously, we need to protect these key people. We will need them to help set up POD sites as soon as possible to treat the general public. Those plans are all in place.”

Day was adamant about letting the busi- ness community and general public know that there are “overarching plans covering a generic response to most any incident in the area and there are detailed plans to provide guidance for actions to be taken with regard to specific threats. We have some 80,000 peo- ple that could be affected in this county. It won’t happen overnight, but there is a plan to cover all of it.”

Day was also careful to mention cross border cooperation with Canada. There are plans in place to help prevent spread of health issues from north to south and vice versa. He men- tioned Ebola as an example and recalled H1N1 (Swine Flu) and SARS (Severe Acute Respiratory Syndrome) problems in the past. They both required a comprehensive response.

Another important acronym is CBRNE— Chemical, Biological, Radiological, Nuclear, Explosive, the acronym used by the fed- eral government with regard to terrorism potential. Day insisted being prepared is essential. His group works daily to ful- fill the Boy Scout motto, “Be Prepared.” Labombard agreed that this area is as pre- pared as it can be, with plans to maintain its vigilance in the future.