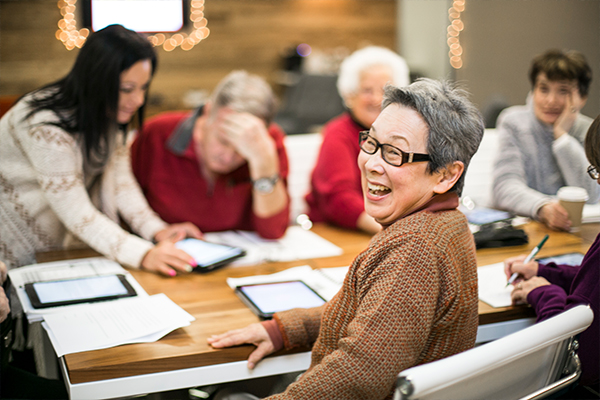 FOR MORE THAN FIVE YEARS, SENIOR PLANET has been offering North Country residents over 60 the opportunity to learn new things and meet new people. They host social gatherings, offer technology and fitness classes, and even provide a device for people who need one to use for their courses.

While the pandemic forced programming to go entirely virtual last March the Senior Planet network has grown tremendously since then. Within two weeks of the shutdown, all Senior Planet’s programming was available online. “It is a true testament to the organization and the passion for really making a change,” said Marco DiGirolomo, program manager for Senior Planet North Country.

Senior Planet offers programs and courses that help individuals to better utilize technology in their lives. Programs range from financial security, to how to purchase a new computer, telemedicine, social media, and how to use video chat apps. Fitness programs are offered in collaboration with Cornell Cooperative Extension via Zoom twice each week. The online offerings allow North Country residents to connect with friends and family and to meet new people from out of the region who attend the virtual courses. That connectivity has been a “boost to the mental health of our members,” DiGirolomo observed.

Older Adults Technology Services (OATS) was founded in New York City in 2004 by Tom Kamber, who wanted to help seniors use technology and improve their lives. It started with a free 10-week course in Brooklyn and within 10 years, had delivered more than 10,000 classes. In 2013, OATS launched Senior Planet, a technology-themed community center for older adults in Manhattan. In 2015, Senior Planet opened a North Country branch at the Champlain Centre Mall in Plattsburgh “to address the need for digital literacy and connectivity” in the North Country,” said DiGirolomo. Senior Planet has locations in Colorado, Texas, and California as well.

State Support
All Senior Planet’s programming is free for participants. Course curriculum is standardized by the Senior Planet team and “all of our programs touch on cyber security in some way,” DiGirolomo explained. “We offer programs on financial security, online banking, protecting personal information online, what are some red flags to be on the lookout for and how to protect themselves.”  Funding for Senior Planet comes from the New York State Office for the Aging. DiGirolomo said that State Assemblyman Billy Jones has been “our champion” in regard to securing funding.

“The Older Adults Technology Services Inc’s (OATS) Senior Planet North Country is an invaluable community resource that helps older residents learn critical computer skills and thrive in today’s digital age,” Assemblyman Jones said. “There are only two programs like this in the entire state. One was in New York City and I made sure the other one would be right here in the North Country. That is why I have worked to secure $900,000 for this vital organization since I was elected to the Assembly, and I’ll keep working to support Senior Planet’s mission.”

Teach by Doing
Josy Delaney knew several people who took courses through the Malone satellite Senior Planet location in 2017 when she lost her job and found herself with free time to participate. The classes were interactive, and the participants were engaged, Delaney said. “It was so much fun.”

Delaney has a background in exercise physiology and public health. She proposed developing some fitness classes but instead was offered a tech trainer position that had recently become available. She said she realized, “I don’t have to know all the answers, I just need to know how to find the answers.” If a student has a question Delaney shows her/ him how to use the right search words and find the answer online. “I like to teach by doing,” she said. “Don’t expect to be proficient after one class,” Delaney tells her students, especially those who are sometimes frustrated that they aren’t getting the hang of it as quickly as they would like. “This is like learning a new language.”

Because she falls into what Delaney calls the “60 and better” age category, she can really empathize with her students and likes to give them real-life examples when she can. She recently showed her students how she had synced up her fitness app with her United Healthcare account to receive a $10 gift card each month that she gets 7500 steps or more for 10 days. “That’s $120 of free money for a year,” Delaney said.

Stronger Connections
The Senior Planet motto is “aging with attitude.” That motto and the mission of Senior Planet aligned with DiGirolomo’s career goals. He grew up in New York City and attended SUNY Plattsburgh. He decided that he wanted to stay in the North Country after graduation and has been with Senior Planet since 2017. “It’s the impact we have,” he said explaining what is most exciting for him about his work. “We’re not just teaching the technology; it’s about better utilizing it.”

One of the most rewarding aspects for Delaney has been the connections she’s made. “I absolutely love it,” she said of her work as a tech trainer. Part of what she does is help people to set up email accounts. She recalls a 78-year-old participant in one of her classes who sent her very first email to Delaney. It was only a few words, but Delaney was so proud to have been a part of teaching the woman how to correspond with her children and grandchildren.

“We harness technology to change the way we age,” founder Tom Kamber is quoted as saying. Delaney said that resonates with her. The ability to help people to better use technology and enhance their lives is really rewarding. Building a sense of community and networking with others adds to the experience for members and staff alike.

It is unclear when the Champlain Centre location will be able to re-open. “We definitely will not open our in-person facility until it is 100% safe to do so,” DiGirolomo said. Even once the facility is safely re-open, he emphasized online courses will still be offered.

“I love the people, but I also love working from home,” Delaney said, but she added “I miss the hugs.”