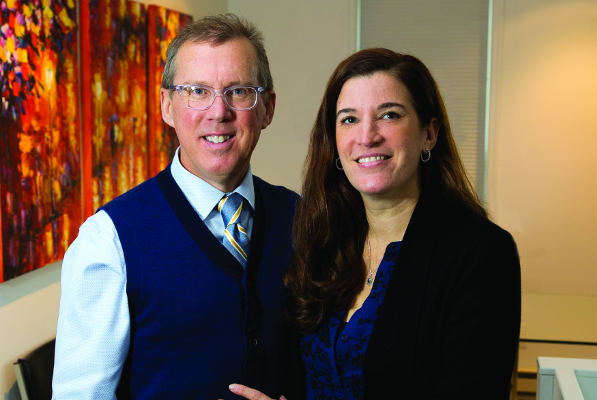 Dr. Kristin Ambler always knew he wanted to enter private practice when he finished medical school; it was just a question of where. When he graduated from New York Medical College, he opened a practice in Peru and moved to Plattsburgh shortly thereafter.

When Ambler first met his future wife, Stacey, who graduated from Cazenovia College with a degree in graphic design, both of them had busy professional lives in different cities. Later, when Stacey called Kris to see what he thought about a job she’d been offered— in her field—in Plattsburgh, his enthusiasm was off the charts.
Kris admitted even then that Stacey enhanced his life so much, he wanted her to be a part of his life both professionally and personally. A year or so after she moved to Plattsburgh, Stacey recalled, “Kris convinced me that working together would be both enjoyable and beneficial, and it has been.” In the seven years since they began sharing their workspace, they’ve married and welcomed two children to their family. Sadie is three and Landon is two.

The Amblers own and operate Ambler Medical, but they are quick to give credit to the irreplaceable medical providers who provide care at the practice—Crystal Palmer, RPA-C; Shannon McMeekin Hagadorn, RPA-C; Kathy Glenn Roberts, RPA-C; and Joshua Baker, RPA-C—and their great office manager and strong support staff who keep them all moving along. Stacey’s role is something of a chief operating officer to Kris’s chief medical officer. “Her role is to make sure everyone feels supported, that there are solid practices in place, and to seek out new opportunities for the practice while I focus on medicine and patients,” he said. Tackling both tasks seems insurmountable, and he agreed. “It’s impossible to do both; you need that trusted partner.”

And he’s got one; they both do.

One of the remarkable things about the Amblers is the admiration and respect they have for one another’s roles. Kris was emphatic about Stacey’s ability to organize everything from the minutiae to the gargantuan—both personal and professional. She pointed out that it’s something that is intuitive for her.

Both are engaged in their work, with individual professional and practice goals. Stacey would like to get her medical coding certification and efficiently tackle population health. Kris strives to maintain relationships with providers across Northeastern New York, acknowledging the increasing compartmentalization of health care. “Hospital care and outpatient care are now typically delivered by different physicians,” he explained. “It is vitally important that physicians maintain a level of interaction in their roles to provide high quality care, but to also have a role in how the care is delivered across all venues. I continue to strive for those relationships.”

With so much overlap between their professional and personal lives, the Amblers are candid about how they treasure their “outlet time.” Their personal interests are unique. Kris is an avid and eager kite boarder. “We know how a day or a week is going to play out based on the weather app,” joked Stacey. But she added, “Having an outlet like that is really important—for everyone. We both try to ensure that the other gets time to unwind. My pleasures are typically a little less adventurous— escaping into a good book, sewing, or taking a quick walk or a jog.”

With so much shared space and shared “To Do” lists, one of the inevitable questions that comes up is in reference to the division of labor: Who does what? The Ambler answer is this: Keep it fluid. Their focus is task completion rather than assignment. Stacey is pretty candid about a common hurdle: “Without a doubt, our biggest challenge is time. There is always something that needs to get done; but as with any true partnership, we do well supporting each other in the balance. Sometimes, I’m running office meetings and cutting the lawn, and Kris is doing the dishes…it just gets done,” she said. Kris agreed, adding, “Traditional divisions don’t apply to us.”

One of the most enjoyable things for both of them is that they are never at it alone. “That makes any obstacle surmountable and all successes more enjoyable,” said Stacey. The pursuit of professional goals can leave anyone feeling like they have a work family and a family at home; the Amblers are able to draw strength and support from a dynamic that others might find challenging. “More often than not, Stacey will come up with a novel idea that I never would have thought of,” said Kris.
“The intellectual non-routine stuff that percolates can be a lot of fun.”

Professional goals can be a lot easier to measure when compared to raising a young family and growing an independent community practice. Sometimes, feeling good about the day-to-day can be tough. But Stacey takes it in stride. “Starting and ending the day with happy children…when I am present in the moment with them, that erodes any stresses or complications that existed during the day,” she said. Kris treasures that family time as well—every day.

Both Amblers freely admit that living and working together has some unique challenges. They are just as quick to point out that those challenges are balanced by the unique rewards of their arrangement. “Given the current health care environment, the survival of an independent practice like ours would come into question if not for our relationship and our mutual commitment,” said Kris. “Many of our accomplishments never would have happened without it.”

“Some of our most enjoyable family time is after the work day, sitting on the beach, chatting with neighbors, watching our kids play in the water,” said Stacey. “At the end of the day, we’re blessed to have a pretty great life. We work hard for it, but still, it’s pretty great, and we’re pretty lucky.”

With practices like the Amblers’ growing, the North Country is pretty lucky, too.