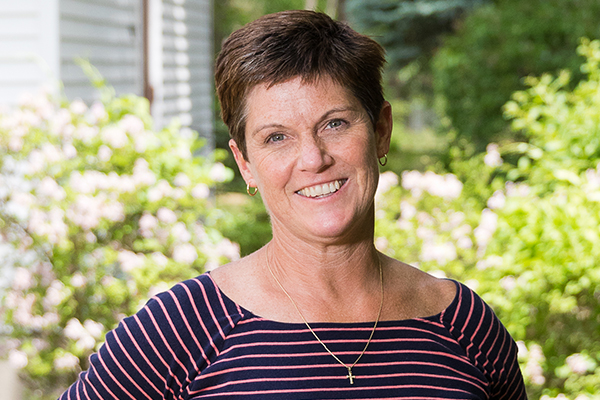 WHEN ELIZABETH PEARL was in ninth grade, she was injured on the basketball court. The treatment recommendation at the time was to rest on the sidelines. Her time on the bench, spent watching her teammates, lasted for only two practices but for Pearl, “Two minutes of not being on the court was too many minutes.”

The challenge of being injured inspired Pearl to learn about how the human body functioned, how to heal her body and how to get back on the court. As this passion for the study of the body developed, she realized she wanted to help other people stay off the sidelines at any point throughout their lives. “Whether they are a kid like I was, or seventy-year-olds still wanting to hike a mountain or play with their grandkids,” she explained, she wanted to help people feel and function at their best.

To fulfill her dream, Pearl pursued training in Physical Therapy, obtaining her undergraduate degree from Russell Sage College in 1991. She then pursued a Master’s degree at the University of Maryland in Baltimore, stepping away with her degree in 2000. With her enthusiasm for all that physical therapy can offer, Pearl began her career in a rehab hospital in Baltimore. Several years later, after she gave birth to twins, she realized it was time to move back to the North Country to raise her children near Elizabeth Pearl her family.

Through her work in a variety of settings, Pearl discovered how much she enjoyed being creative in her clinical work. She soon understood that with her creativity and out-of-the-box thinking, she was ready to explore the world of small business ownership. Pairing her entrepreneurial spirit with her drive to help others live their best physical life inspired her and she began to think about opening her own practice. As the plan began to take shape she realized breaking into the business world was a rigorous process that was easier said than done.

Since she knew little about business, Pearl reached out to the Small Business Development Center and met with an advisor who responded to her enthusiastic questions by posing some of his own. He asked, “What do you know about business?” “Nothing,” she responded. He followed it up with, “Do you have an office space? Do you have any money?” “No,” she replied. Confused, he asked, “Well how do you know you would be a good business owner ? ” Confidently, Pearl responded, “Because I’m a good physical therapist and I’m eager to learn all that I do not know about business.”

After months of hard work developing her business plan, NBT Bank helped Pearl fund the purchase of her first office building. Much of the equipment she needed came from an auction of a physical therapy clinic that had recently closed. Finally, in December of 2009, she officially opened Pearl Physical Therapy on Court Street in Plattsburgh. She did very little advertising early on, but word of mouth helped the business grow. Clients loved the work she did and recommended her to their friends. It wasn’t long before the practice outgrew its location and it was time to look for a bigger building. When an ideal location became available on South Peru Street in the city’s south end, the practice made the move.

Not only does Pearl help people off the sidelines of their playing fields, but also off the sidelines of the business world. As her business grew, she knew she wanted to help other healthcare providers who were starting out. To accomplish her goal, she created a second business called Adirondack Integrative Wellness which has allowed her to put her business creative side to work. The AIW concept supports like-minded, independent healthcare professionals by allowing them to work in a collaborative office space. AIW has supported the growth of small businesses in acupuncture, massage therapy and mental health. Each business owner has access to a professional office that provides them a supportive environment as they grow their private practices. When their practices are ready, AIW wellness professionals move out on their own, grateful for the support Pearl has provided.

In addition to helping professionals starting out, the AIW concept benefits the Pearl team as they learn from other like-minded health care providers. Pearl knows it takes more than one discipline to help people live their healthiest lives. When professionals have an opportunity to share common patients with other providers, they are able to collaborate in the overall health of the client.

Recognizing the shortage of physical therapists in the North Country, Pearl has made a commitment to train students by collaborating with schools and universities. Doctoral students spend anywhere from six to fifteen weeks training with a licensed therapist in her practice as part of their school’s curriculum. This opportunity has allowed Pearl and her colleagues opportunities to give back to the profession as well as recruit strong professionals to work in our community. Three of the PTs who have trained with Pearl have stayed on at the practice after graduation.

Pearl’s favorite thing about being a physical therapist is watching how her work can help people feel better—mentally, physically and spiritually. Her advice for anyone looking to pursue their passion through business is, “If you want to be successful business owner, you can. You should focus on the opportunities of owning and running a small business and work through any obstacles you may encounter. If you learn well and work hard, you can do well.” That mentality has helped her create a thriving healthcare business that serves the Plattsburgh community every day.

Pearl built her business from the ground up and now enjoys helping others grow in their careers. It shows that even if you are stuck on the sidelines, there is always a way to get in the game.