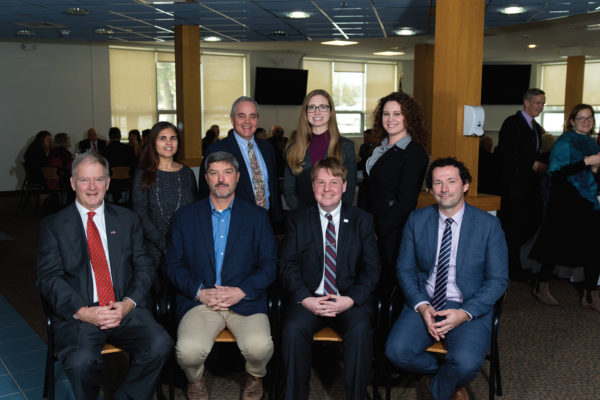 There is no substitute for experience, and those who have been part of the North Country business community for a significant length of time have rich stories and lessons learned from many wins and losses encountered along the way. The reward for living through the challenges of our careers is that we gain perspective and with that comes wisdom. The attendees at this year’s Strictly Business Forum candidly offered their experience and insights.

Joining me at my table were:

Bill Owens, Managing Partner of the Stafford Owens law firm and a former member of Congress

Michael Cashman, Supervisor of the Town of Plattsburgh

John Bernardi, President and CEO of the United Way of the Adirondack Region, Inc.

Each table at this year’s Forum was fortunate to have a participant who had been part of the very first SB Forum held in 1990. Bill Owens brought that three decade look back to our table. “Over the past 30 years we have become much more focused on economic development. It’s a more coordinated activity. As a result of Canadian companies moving into the community in the 1990’s we’ve developed a manufacturing core. This is important because skills learned in order to work in that field allow people to move through the system and maintain employment.” Owens emphasized the importance of building a skilled work force that can keep up with the growing manufacturing demands in our region.

John Bernardi stated the increase in available jobs focused on the manufacturing industry has helped many families become more stable. “It’s pretty amazing. There are good jobs here. Jobs that are offering $17-$20 per hour, and not all communities can say that. In my time I have seen real shifts toward emphasizing the manufacturing hub we have and building upon it.”

Clearly manufacturing and industry opportunities are on the rise, and business leaders are using that momentum to their advantage. Bernardi referenced a fact he recently heard from Mike Cashman that the traffic count on the corner of Smithfield Boulevard and Route 3 in the Town of Plattsburgh is busier than Wolf Road in Albany.

Cashman explained that developers have identified that stretch of Plattsburgh as “The Million Dollar Mile,” which is why the Town continues to see business development in that area. “I am amazed by my counterparts, town supervisors from around the state, who continue to see Plattsburgh as a producer of products they recognize. From New York City and beyond, they are looking at our community as a standard for many things.” Cashman expanded his comments to include initiatives such as Plattsburgh’s new MHAB facility. Gesturing around the room we were assembled in he said,

“Plattsburgh is out in front in terms of addressing the opioid crisis. We might seem sheltered by the ridge of the Adirondacks, but people from all around the state are paying attention to what’s happening here.”

Chris Kreig observed, “There is a unified effort among The Development Corporation, the Chamber and the municipalities to encourage economic development throughout the North Country. It’s a pretty heavy lift and it’s a testament to the folks that live here.” Kreig was enthusiastic about where the Plattsburgh International Airport is now, and how it continues to drive economic growth. “What we have is unique. Other communities have airports but they don’t have what we have.”

Jesse Ringer is working hard to develop new ways to meet the needs of Jeffords’ workforce. He understands that attracting and retaining young professions requires creative approaches. “Young professionals seem to come back to Plattsburgh in their 30’s because they realize the area has so many resources. We try to offer more flexibility, especially for employees with families. In our business many members of our management team have been with us 25-30 years and it can be difficult for them to adapt to this more flexible approach.” Ringer said that while it does create some hurdles with the workplace culture, it is a low-cost incentive to provide employees with more flexibility.

Courtney Chandler DeLaura agreed, saying that it can be challenging to compete with metropolitan areas because they offer more in terms of telecommuting and flexibility. She recognized that allowances made for employees with children can seem unfair to others whose families were raised years ago. “We offer flexibility when it’s needed, recognizing that not everyone requires the same considerations.” She sees the Agency employees as her biggest asset and works hard to retain them because, in her business, relationship building is key. “When people have trouble, we are there for them.

We streamline things for our customers during very difficult and emotional times.”

Christina Ubl characterized the North Country as a resilient community. In her view, the region continues to work toward making Plattsburgh an inviting place for young professionals. Clute Wealth Management saw solid growth in 2019. “The economy has supported some growth in our area and it’s been a good year for us. We are fully staffed and our business continues to follow national trends.” CWM focuses on women in transition and Ubl has noticed an increase in the number of aging women who are taking an interest in their financial independence. “Women are making more decisions about their financial futures,” she observed.

Chris Kreig said the biggest win for Plattsburgh International Airport has been attracting United Airlines. “We needed to get a daily service that meets travelers’ needs and United is doing a tremendous job. The New York State Department of Transportation studies the economic impact aviation has on areas of the state and they found $15 million generated by our airport and $45 million in economic impact.” The way the airport interacts with so many businesses and municipalities, and the cross-border relationship the region has with Canada are all factors Kreig said keep the airport in great shape.

Jesse Ringer observed, “I continue to be blown away by the development and the investments people are making here. Jeffords Steel had another record-breaking year. Business has been going up since 2016. When the economy is good, the larger fabricators stick to the bigger cities so we aren’t competing as much with them. As long as development opportunities continue to present themselves, we’ll be in a good place.” Similar to others at the table, Ringer did express a level of cautious optimism. “I feel a recession coming but we are preparing for that as well.”

Bill Owens added, “I think eventually we will be impacted by a recession that will alleviate the lack of employees. People will be available to fill the jobs, and that’s where the real test comes. Will you hit the ceiling of where those employees can go? How do you then continue to bring jobs to the region?”

The people at our table viewed the future of the North Country with “tempered optimism”. John Bernardi was proud of the way the community is making strides in addressing issues such as the opioid use. “There is more awareness about illegal prescription drug use and
SPARCC (Substance Abuse Prevention and Recovery of Clinton County) has helped decrease use. That’s not to say we’re a sober community because cocaine and meth are on the uptick.” However, Bernardi recognized an overall shift in a positive direction and added that there are
good jobs available. In terms of quality of life, he added, “There is still work to be done to have enough affordable housing, public transportation and affordable child care.”

Courtney Chandler DeLaura believes the future will see an increase in our reliance on technology. “It will help to ease the burden on families and with transportation. We’re seeing more telecommuting, video conferencing and telemedicine. Who knows what it will look like
in five years, but it will likely include an increase in the reliance on technology.”

Michael Cashman added that the next five years will see more emphasis placed on the environment. “We are going to see people investing in practices to protect the environment. Businesses are becoming more environmentally responsible. We are planning for it with our SMART
Growth Town Center Plan. The Town of Plattsburgh was also the first Clean Energy Community in Clinton County designated by NYSERDA.”

Bill Owens summarized the overall sentiment well when he said, “We have to be current and we have to be adaptable.”

The Adirondack Coast is fortunate to have so many creative, driven, forward thinking leaders living and working in our communities. These innovators bring their knowledge and experience to the table every day and lend their perspective to arenas beyond their jobs. They sit on committees and boards and they volunteer time and energy to community efforts that make our area strong. As a result, the North Country continues to be a fantastic place to live, work and recreate.

“My wife, Karen, and I were newly-weds living in our first home in Saranac Lake. As we stoked the hot  coals of our woodstove we plotted the glorious life ahead of us. By God, our dreams came true.” John Bernardi United Way of the Adirondacks

“I was eight years old, in third grade and an avid hockey fan.” Mike Cashman Town of Plattsburgh

“I was implementing the merger of Stafford, Purcell & Edwards with Fitzpatrick, Trombley, Owens & Lahtinen, PC and trying to corral a most interesting cast of characters.”  Bill Owens Stafford Owens

“I was in 5th grade, crushing math tests and worrying about catching cooties from girls.” Jesse Ringer Jeffords Steel

Amy Kretser is the Executive Director at North Country Association for the Visually Impaired.