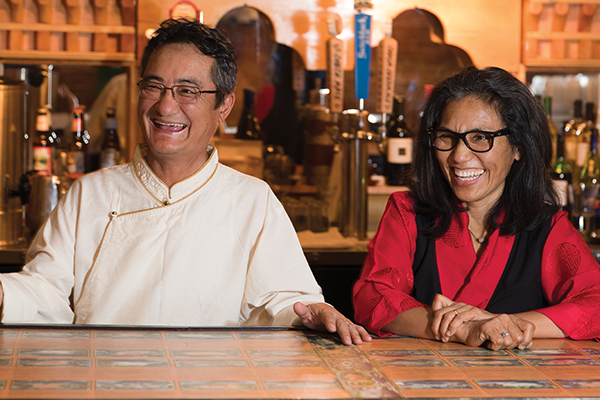 As you enter the new space Tenzin Dorjee and his wife, Yangchen, have created in the old Conroy’s Organics farm market café on Route 9 north of Plattsburgh, you will find an astonishing transformation. Freestanding shelving units stocked with gourmet organic, packaged foods have been cleared and replaced with plush oriental rugs to create a wide open meditation space. Colorful Tibetan prayer flags sway in the breeze on the outside patio. A picture of the Dalai Lama sits in front of bowls filled with water in a traditional Tibetan water offering and Tibetan zodiac placemats and Himalayan sea salt decorate the café tables. The space is warm and inviting, like its hosts. As you enter you will immediately sense that the Café Himalaya is not going to be your average eatery.

When Dorjee and his wife opened Himalaya Restaurant in March of 2010 on Margaret Street in Plattsburgh, New York they were taking a big risk. Unlike larger cities with universities that have a host of international foods available to the local population, Plattsburgh was sorely lacking in anything more exotic than the standard offering of General Tso’s Chicken. “We needed the livelihood, but it has always been my wife’s and my intention to introduce ourselves to our community, to make ourselves known through a dialogue about our culture, our traditions, spiritual leanings and compassion as a way of daily living practice,” explained Dorjee. The décor of the restaurant, and its accompanying retail store, was as original and eclectic as it was warm, welcoming and beautiful. Exposed brick walls, paper lanterns, Tibetan prayer flags and red tablecloths stimulate your senses as you step inside the Dorjees cultural oasis.

The restaurant slowly and surely built a loyal clientele with their menu, which allowed the customer to “choose their own spice level” while sampling the flavors of Tibet, Nepal and Dorjee’s native Bhutan. Patrons left comments like, “I’ve never had this food before, I’m hooked” to “I love the food.” on Yelp and the word spread. Diners sampled momos (dumplings) and added words like shapta (Tibetan-style curry), tsipsha paa (pork with kale) and drobuk to their vocabulary. But Dorjee was not content to introduce the North Country to just the food of his homeland and neighboring Himalayan countries. He had bigger plans.

As the years passed Tenzin Dorjee began to play an increasingly active role in the introduction of Tibetan arts and cultural practices to the North Country region. As early as 2012, Dorjee collaborated with SUNY Plattsburgh and The Strand Center for the Arts (Formerly North Country Cultural Center for the Arts) to bring the Tsawa Monks, traditional Buddhist monks, to the area as part of a larger Festival of Tibetan Arts and Rituals. Locals were treated to the creation of a traditional sand mandala and the symbolism of its transience, a film screening highlighting the Dalai Lama’s flight into exile, Cham dancing and traditional music. Dorjee’s efforts contributed to Mountain Lake PBS’ creation of the documentary, “Arts in Exile: Tibetan Treasures in Small Town America,” where Dorjee’s voice can be heard telling the story of sharing Tibetan culture in the town he now called home.

The documentary included the creation of a tile mandala (seen at left) by artist Sue Young which adorns the side of a building on City Hall Place in downtown Plattsburgh. Dorjee was moved to tears at the unveiling of the artwork. He commented at the time that the town he lived in was full of honorary Tibetans, and he was warmed to see the community embrace the culture and spiritual values he holds dear.

A Café With Purpose

One wonders if the fanciful statuary that have long been a signature roadside attraction at the former Conroy’s market were a sign that Dorjee and Yangchen were meant to take over the rural space. Amongst the fantastic cement porpoises, horses and angels, snow lions, with their strong protective powers, welcome patrons and all passersby to a safe haven. Under the Dorjee’s ownership since June of 2017, and closed for the first winter, plans for the space slowly kicked into gear. With Dorjee’s public persona in the community long associated with educating the local community about his family’s cultural background, the evolution of the new space is aligning with a purpose. “We love the place and now we have a vision, and we are working toward that vision,” said Dorjee.

One of the Dorjee’s goals is to keep the restaurant on a small scale while beginning a larger scale food packaging operation. While not offering your average take out option for the North Country, the Dorjees have focused the café menu on the cur- ries of India, where his wife Yangchen, a Tibetan refugee, was born. “We hope to process ready-to-eat noodle dishes, soups, and our typical Indian dishes like Chole Chana Curry with chickpeas, Rajma Curry with kidney beans and Moong Dal Curry to pick up and go,” said Dorjee.

Running two restaurants is not for the faint of heart. “It is a lot of work but everybody enjoys it,” said Yangchen. “I always think of the customer as my family. Whatever I do in the kitchen I make it like I would for my own family.” Both the café and restaurant kitchens were fed by Yangchen’s garden outside the café, which at season’s end was crazy with cucumbers, tomatoes, garlic, kale, collard greens, broccoli rabe, peppers and swiss chard alongside a riot of zinnias, sunflowers and dhalias. “We did not have to buy tomatoes for almost six months,” said Yangchen.

The meditation and yoga area, sparse except for the padded carpets, has a wholly different purpose. “This will be a community, cultural meeting place, where people can participate in yoga and meditation retreats,” explained Dorjee. “We will have a small library of books on philosophy and world religions.” Dorjee is planning to launch a GoFundMe crowd funding effort to raise money for the cultural education aspect. With the funds, he has plans to build the library space, create a universal spiritual altar, furbish with yoga mats and purchase audiovisual equipment to show documentaries of a social and cultural nature for free. Recent events include an Introduction to Basic Principles of Tibetan Buddhism with Venerable Lama Kunchok Sonam and an introduction to Aroma Yoga with Michelle Doorey, a wellness educator, and co-hosted by Yangchen. The Dorjees will also have hosted their first cooking class at the new location by press time, a basic introduction to Himalayan cooking including soups, curries, the use of Indian spices, and cooking with cottage cheese.

Dorjee is optimistic. “The neighbors come by and tell us they are happy we are here,” said Dorjee. “They tell us, ‘We need a place like this.’ Intrigue is raised and people want to find out more. Instead of having a closed mind they are asking questions. And the Conroy’s have been so helpful; they are the best landlords I could ask for.”

Dorjee has a realistic approach to bias, and takes personal responsibility to try to overcome it in whatever way possible. His approach includes discovering why the other person has the attitude that they hold, and how he can speak to and remove those barriers to thinking. He cites the local organization, Plattsburgh Cares, for its efforts toward removing bias and thinks similar efforts should be supported by the community.

“We are all humans, no different from anybody, anywhere in the world,” said Dorjee. “Everybody wants a happy and fulfilling life. There is not one living being that is not dependent on someone else. Barriers are all human nature and we need to break those barriers down so we can all live as one — one cannot do without the other.” Dorjee concluded, “We would like people to find us on their own, find out who we are and what we do and why we should be a part of the community. If we can do away with ignorance by widening people’s perception it will go a long way in changing the way people think.” In Tibetan culture, the red, yellow, blue, white, and orange prayer flags are used to promote peace, compassion, strength, and wisdom. If Dorjee has his way, those sentiments will be blown by the wind to spread good will to the North Country and beyond.