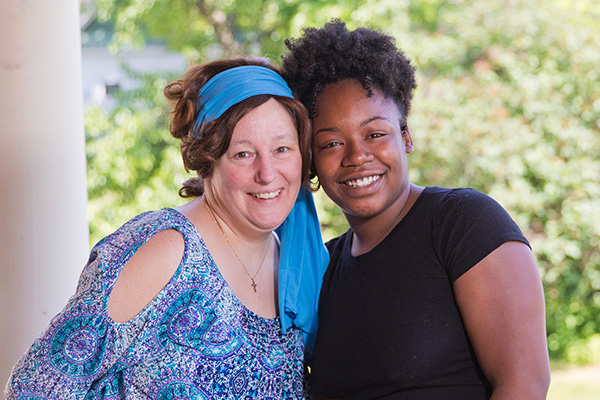 SHORTLY AFTER BEING WELCOMED TO THE BEAUTIFUL 19th century Mary DeVeau House, I was offered a tour. As we wound up and down the stairs, the stories of the home began to unfold.

Tucked in an unassuming area of Plattsburgh, amidst some of the area’s historic homes, is the home where women who have achieved thirty days of sobriety can begin to reassemble their lives in a healthy way. The Mary DeVeau mission statement is quite simple “To allow women the opportunity to recover with dignity and grace.”

While there are a number of small-town advantages that come from living here in the North Country, being spared from the battle of addiction isn’t one of them. Substance use disorder is ravaging our communities. According to the National Institute on Drug Abuse and Alcoholism, “An estimated 95,000 people (approximately 68,000 men and 27,000 women) die from alcohol-related causes annually.” That puts it third on the list of preventable deaths—behind tobacco and obesity.

According to the New York State- Office of Addiction Supports and Services (OASAS), “Statewide approximately 1.9 million New Yorkers (1.77 million adults and 156,000 youth ages 12-17) have a substance abuse problem.” That is one out of every eight adults. Drilling down even further, stats show Clinton County residents binge drink at a higher rate (+5.3%), die of cirrhosis at a higher rate (+6.1%) and get arrested for driving while impaired at a higher rate than the rest of New York State residents (20.3%).

Richelle Gregory; Director of Clinton County Mental Health and Addiction Services shared, “There are a lot of comorbidities in our county. Many of our residents are geographically isolated, there is a lot of poverty here and there is also a high A.L.I.C.E population (Asset Limited, Income Constrained, Employed) here as well. Unfortunately, the pandemic has amplified those issues and all indications are that our numbers are going to keep going up.” If you believe addiction and mental health issues are happening someplace else, to someone else and is someone else’s problem, you really haven’t been paying attention.

The Mary DeVeau House, established in 2008, is the only one of its kind in Northern New York. As a sober house, MDH offers women “a disciplined, longterm residential environment in order to strengthen their recovery tools and healthy life skills.” Residents of all ages, from all walks of life and all echelons of society consent to having a daily curfew (including a breathalyzer/sobriety check), participate in household chores and look for a full-time job. The house can support eight women in residence, but it continues to be a beacon of health for all residents, past and present. It operates as a nonprofit and exists based on a large donation secured by founder and president of the Mary DeVeau Foundation, Loretta Rietsema. While Loretta shies away from the spotlight, she does not withhold herself from the MDH or its residents.

I spoke with Tonya McPherson; Housing Manager at MDH, who was brave enough to share her story. She expressed her belief that, absent her time as a resident of MDH, she wouldn’t be here today. In the context of our interview, I took her comment to mean the Plattsburgh area, but in hindsight I believe she meant “alive and well.”

McPherson’s story isn’t very different from most of the residents that come to MDH. It was coming to the house in 2014 that shored up the foundation for her 11-year sobriety—something she celebrates with her residents. Her post as housing manager, was a position that was created at her behest in 2016 and she has held it happily ever since. “After more than thirty years of hell, I realized my purpose. I went through it all to be able to share and relate to these women,” she explained, “and now, I can help them. How lucky am I?”

Residents have strict guidelines they need to follow, limiting their comings and goings from the house, their guests (not without approval and never overnight) and their participation in their recovery (recommended daily meetings and securing a sponsor). There are expectations about finding work, registering with Social Services and keeping all healthcare appointments. The structure is helpful in early recovery and the transparency is necessary for building trust of fellow residents and themselves.

A few women who had lived at the MDH for a time joined my conversation with McPherson. They shared their early recovery stories with me with humor and confidence. Brianna, who just turned 21, is from downstate New York and is in recovery from crack cocaine. She knew she couldn’t go back home and stay clean so she chose to live at the MDH. She now has a job, an apartment and is celebrating 19 months clean and sober.

Renee is from the North Country, married with two elementary aged children. She is an alcoholic and tried to manage it by herself until she couldn’t hide it anymore. She remembers the drive from inpatient to MDH. “When the car stopped, Tonya came bounding out of the house and just started grabbing my bags. I was like,’ Wait I haven’t even checked it out.’ Tonya told me, ‘It doesn’t matter, you’re here. You’re with us now. C’mon on in. It’s only going to get better’.” Renee did as she was told. She and Tonya laugh about that first meeting now, but Renee is candid and humble about how angry she was. “None of this was fair,” she said. But through the grace offered at MDH she realized how profound Tonya’s words were. “It really didn’t matter. I was there.” Renee now has 15 months clean and sober, has been back with her husband and children since Christmas time and has earned her Master’s degree in early childhood education. She will be putting her degree to use when school starts in the fall.

“The House” as the residents call it, is in a residential area and blends right in with the neighbors and the neighborhood. That is by design. The idea that battling addiction can be taken care of in an inpatient setting fails to understand that it is after that stay that the residents need the support of their community. My conversation with McPherson and other women who have had the opportunity to rebuild their lives with the help of the Mary DeVeau House pointed out that in their journey from early recovery to today really does only get better.

It is often said that the opposite of addiction is connection. Finding that connection is vital for people in recovery, especially early recovery. The support women battling addiction find at MDH is a community enjoying their sobriety and rediscovering themselves with the help of others who understand exactly what they are going through.

When I left the Mary DeVeau House the women were sitting down to dinner, made by residents for residents and guests. The table was set and the smells from the meal were divine. The chatter of friends who were catching up bubbled along into a crescendo of laughter. I was overwhelmed with what incredible work is done one day at a time by each woman at this truly remarkable home.