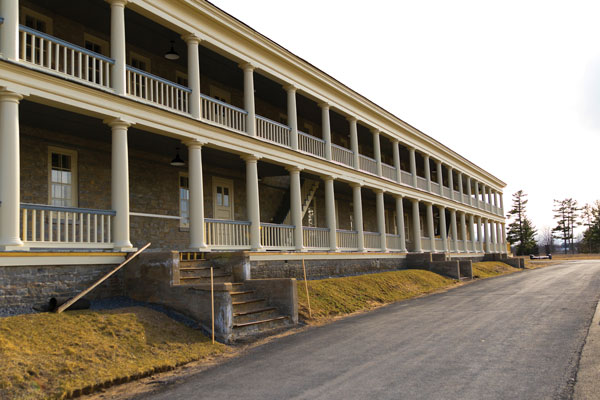 The Old Stone Barracks on Ohio Avenue in Plattsburgh, NY was built during a decade that saw second-term President Andrew Jackson retire the national debt, the Alamo fall under siege and the Underground Railroad take hold. Originally designed as housing for an expanding U.S. Army, stonework began on the building in the late 1830’s, but construction was interrupted by bureaucratic red tape and the building was not occupied by soldiers until the fall of 1843. The Preservation League of New York State had the barracks on its Seven to Save list of at-risk historic places due to its role in “illustrating the long-standing military presence in the Champlain Valley” and its “massive stone walls, heavy timber framing, and
two-story columned porch.”

Consider the barracks saved and in the best of hands, as evidenced by the soon to be completed renovations taking place under the watchful eye of new owners Terry Schmaltz and Mary “Theresa” Pearl. Originally the couple looked to create a retirement dream around their mutual love of small batch beer brewing, but plans for a post and beam brewery on property they own in the Adirondack Park experienced a delay in site approval. That delay would prove to be fortuitous. Around that time Schmaltz and Pearl, both retired Army colonels, saw the For Sale sign on the barracks and found the perfect home for their fledgling brewery, Valcour Brewing Company, and an accompanying inn, conference/special event center and restaurant. They purchased the building with adjacent former military fairgrounds in November of 2014.

It Took a Village
The once-beautiful columned porch, a point of interest mentioned by the Preservation League, was disintegrating, the building was filled with debris and antiquated plumbing and heating equipment, to the tune of ten tons of cast iron and twenty tons of unusable wood. Renovating the building to suit the needs of its new commercial purpose while retaining the building’s inclusion on the National Register of Historic Places, a designation it received in 1971, was at the top of the new owners to-do list. Head Brewmaster Rob Davis explains, “The building was probably within five years of being unsalvageable. And restrictions for the National Register include no alterations to the exterior.” Under Schmaltz’s
supervision, a team of local suppliers and tradespeople were coordinated in such a way as to accomplish the owners’ renovation and design goals with respect paid to the building’s history.

After the removal of debris, the building was stripped to the stone walls and rafters which were made up of beams thought to be over three hundred years old. With forty windows per floor and stone throughout, the challenge of minimizing heat loss while simultaneously bringing the plumbing, heating and cooling systems into the twenty-first century was awarded to Nathan Seller of All Trades Mechanical in Champlain, NY. Once the basement was prepped with a new concrete floor by Branon Construction, All Trades went to work. The state of the art HVAC system they installed is getting kudos from everyone on the receiving end of a building tour,
including non-HVAC geeks. The system winds small (2 inch) preinsulated tubing capable of high-velocity airflow through wall structures and around obstructions serving as the duct system.
The tubing is often used in structures that have space constraints or architectural limitations or requirements, so it was perfect for the nooks and crannies of the historic building. “It is fully computerized,” said Seller. “A sensor outside tells the unit if it needs to switch from the heat pump to the boiler to heat the building.”

According to Davis, Rick Casey of Casey Electric did one of the most important jobs on the site. “He stripped the building of all previous electric and installed 3-phase power throughout, a necessity for the state of the art HVAC system, along with up to date low voltage power for the rest of the building.” Placid Foam Insulation, owned by Greg Rupert from Lake Placid, NY discreetly added much needed foam insulation to aid in the building’s energy efficiency.

Tim Tyler of T&T Leasing and Steve Bola contributed to the build- ing’s infrastructure. For each of the building’s three floors measuring approximately 5,000 square feet, they were charged with the bulk of the sheet rock installation to create bathrooms, individual rooms for the inn on the first and second floor, the kitchen and conference center. The owners’ desire to use as much of the building’s original materials as possible had them laying down original floor boards on both the floors like puzzle pieces, to create unique floor details and gorgeous, gleaming floors where once there were gaps. Tiling, installing metal panels and a viewing window in the brewing area, and creating a wheelchair accessible exterior entrance also fell to T&T’s expertise.

Layout, Space Utilization and Design
The main floor houses the bar, brewery, restaurant kitchen, bath- rooms, and at the far end, three rooms for overnight guests. The actual bar is a glorious work of craftsmanship, made from a one hundred year old tree taken from the Adirondacks. It boasts a rough hewn edge and a high shine. Smaller pieces of the same tree were used to create other decorative elements, including the Valcour Brewing Company sign, sporting the logo created by Schmaltz.

Original wood from the building has been reclaimed and made into tap handles, which are topped with a stainless steel version of the logo, made at a mechanical engineering firm Schmaltz owned but has since sold. The tables are an eclectic mix, some picked up at local antique shops like the Red Rooster by Theresa and refurbished; three of them were made by Schmaltz. The walls in the bar not made of stone were painted “Caliente”, a warm red from Benjamin Moore, by Matt Murphy and Kiel Peryea of All Action Painting. And Oak and Ash Knifeworks’ Mike Lawliss created a table with an inlaid chess board made of two-tone unstained poplar. Nearing comple- tion, the kitchen, with a waitstaff counter opening out to the pub tables, boasts an 11 square foot walk-in cooler made by Matt St. Claire, owner of BeCool Refrigeration.

The industrial pendant lighting selected by Theresa complements the natural stone and exposed beams, one of which was signed in 1838 by one Moses Elwood, presumed to be a worker on the building when it was originally constructed. The presence of his name and mystery of its origin prompted Head Brewmaster Davis to name a beer after him. Elwood’s Double Smoked Porter boasts cherry and applewood smoked malt and chocolate-roasted barley. The tanks for the new seven barrel system Davis will soon be brewing with are on their way across the Atlantic at SB’s press time, due to touch down in the Port of New York in April. “Rob is an excellent brewer,” said Schmaltz. “I can’t wait to get him brewing on the big system.” Davis is already earning accolades for his Ben Arnold’s Double IPA and his Copper Nails brew, a classic light amber ale.

While the original building contained no interior stairs, some were added in the 1870’s and rebuilt in the 1890’s so the second floor is accessible without having to go outside. In addition, an elevator is nearing completion that will make the short trip upstairs. The sec- ond floor includes an event bar, which may serve overflow from the downstairs, a 130 person conference and event center and four additional guest rooms. The event bar has its own story. “Jim Hayes, or “Fort Hayes”, is our neighbor from Lake Forest. He paid us a visit and when he saw what we were doing he told us he had a bar in storage that we might want to see,” explained Davis. It turned out that the bar was salvaged from what was once the Meade-Lee Tavern in an historic Gettysburg inn. “If that bar could only talk,” said Teresa. The mahogany bar sits on a custom frame, made by master carpenters Tyler and Bola.

The event bar area also boasts a beautiful stone fireplace flanked by floor to ceiling, built-in cabinets and display shelves, also created by Tyler and Bola. A military history buff, Schmaltz will fill the custom shelves with rifles and cannon shot found in Lake Champlain from the Battle of Valcour. Doors from the conference and event center allow access to the upstairs balcony porch, which has been restored to its original beauty by Branon Construction and All Action Painting. Views of Lake Champlain to the east are visible from the porch.

The Home Stretch
The business model for Valcour Brewing Company is based on an actual brewery in Charlottesville, VA., where Schmaltz and Pearl were stationed during their final tour with the Army. ”There are seventeen breweries in a twenty mile radius in Charlottesville,” said Schmaltz. The one they liked best, Blue Mountain Brewery, is family-friendly, a trait they hope will be the hallmark of their busi- ness once they are firing on all cylinders.
Schmaltz, Pearl and Davis all have a passion for brewing quality beer, and Davis will also contribute his skills in the kitchen as the chef, with the restaurant open for lunch and dinner six days a week.

“We are very lucky that all the businesses we have used were local. We had a great team,” said Pearl. “They knew what our vision was and they were very creative in ensuring that it all worked. If they saw something that might look better, they didn’t hesitate to suggest it or say ‘Have you thought about doing it this way?’ And Terry was helpful in making decisions because of his engineering background.” She added, “They all understood what we wanted to accomplish and they made it happen.”