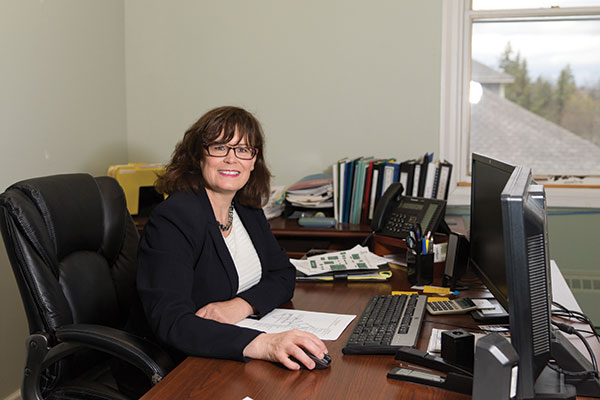 The North Country Workforce Development Board (NCWDB) oversees the OneWorkSource Centers in Clinton, Essex and Franklin counties as well as the employment center of
Hamilton County in Indian Lake, NY.

These centers are tasked with transforming the economy of the North Country, a challenge in a region where the Gross Domestic Product has been shrinking, workforce participation is on the decline, and the unemployment rate, while on the decline, continues to stay in a range significantly above the national average.

To say this undertaking is a challenge would be an understatement, but the organization is building the foundation for a strong future.

Serving Our Region’s Workforce and Employers

Sylvie Nelson has been the executive director of the North Country Workforce Development Board for the past two and a half years. Originally from Montreal, Quebec, Nelson received a B.A. in English Writing from St. Edward’s University in Austin, Texas, and a B.A. in Communications Studies from Concordia University in Montreal, where she also obtained a Graduate Diploma in Journalism. Her career path has taken her from Maine to Texas to Saranac Lake, where she was executive director of the Saranac Lake Area Chamber of Commerce for eight years.

Nelson’s position is overseen by a board of directors and her success is measured by whether her efforts are meeting the objectives of the organization. For Nelson, the biggest initial challenge upon taking over the helm at NCWDB was to learn the countless regulations involved in running an organization of this scope. NCWDB oversees the workforce development service delivery system in four counties (Clinton, Essex, Franklin, and Hamilton) and the allocation of funds received from the federal government through the State of New York (specifically, the New York State Department of Labor). “In addition, we work with numerous partner organizations: CCTE, CV-TEC, FEH-BOCES, ACAP, ACCES-VR, and more,” explained Nelson. “It was important to learn what role they play in the service delivery and how they are accessed by our clients.” Those clients are people who need employment-related services such as jobs, training to meet job requirements, literacy services, etc. The client population and their needs are extremely diverse: they are individuals who may have been laid off, they may be veterans (who make up 8 percent of the client base), people with disabilities, people looking to re-enter the job market, students who have just graduated from high school, college, or a technical institution. They may be young or old. Each client that comes to a OneWorkSource Center is assessed and placed into a program that is appropriate to his/her goal.

The other side of the NCWDB’s coin is to help employers train employees. “It is important to understand employers’ needs and how to match our clients to the available jobs,” said Nelson. This currently poses a unique problem for the region. “We have jobs and we do not have enough workers to match to these jobs. Although more positive than the other way around, it is still crucial for companies to be able to fill their vacancies; otherwise, they cannot grow and meet their business contracts.” This issue is further compounded by the fact that most people who are able to work are already in the workforce. That leaves individuals who are in need of training to meet the employers’ job requirements.

When Nelson began her tenure, the organization was working with the Workforce Investment Act (WIA), a federally funded employment and training program. Shortly after her arrival, a new program came down the government pipeline with a new acronym, the Workforce Innovation and Opportunity Act (WIOA) which took effect July 1, 2015. “Although the acts were similar, there were some differences and we, the NCWDB staff and our partners, had to not only learn it but also update some of our practices to meet its requirements,” explained Nelson. That included updating their name, policies, website, and numerous other administrative requirements. “It was baptism by fire!” recalled Nelson.

The North Country labor force is at its lowest level since 1990. A declining population and labor force participation concurrent with increased hiring have resulted in an extremely tight labor market leaving many jobs extremely difficult to fill. The NCWDB, in partnership with TDC, North Country Chamber of Commerce, CITEC, and WDI have created a task force to ensure a quick response to employment needs. But the biggest challenge occurs when some of the open positions are technical and require additional training aside from what is typically offered through a OneWorkSource Center.

“With a tight labor market, it is imperative that we under- stand the employers’ needs and how we can quickly meet those needs,” said Nelson. While the number of “unfilled” jobs is difficult to quantify, occupations with significant numbers of openings include those in health services (RNs, LPNs, and home health aides), food services, building cleaning services, skilled construction trades, skilled production technicians, engineering technicians, sales workers, and farm workers.

BOCES and CV-TEC are working in partnership with other OneWorkSource agencies. “The literacy/high school equivalency programs are crucial to helping clients find gainful employment,” explained Nelson. “They enable the client to learn skills needed by employers. However, they are only one piece of the region’s employment puzzle.” NCWDB also works with colleges including Clinton Community College, North Country Community College and SUNY-Plattsburgh. They also work closely with the region’s employers, offering on-the-job training for those that don’t offer their own in-house training. The highly anticipated opening of Clinton Community College’s Institute for Advanced Manufacturing (IAM), will enable the organization to put together a system that helps meet those needs and close the skills gap. “IAM will be a game changer in our region.” Nelson added.

Since Nelson’s tenure began, the NCWDB has updated its website, implemented a marketing campaign across the region using the same cohesive look to forms, logos, etc. and adjusted to the changes brought on by implementing WIOA. Nelson has also become involved with the New York Association of Training Employment Professionals (NYATEP) and she is now a member of its board. “We have involved ourselves in advocacy to ensure our voice is heard in both Albany and Washington,” said Nelson. “Our elected officials need to understand the increasing skills gap and the desperate needs of employers to fill their positions while being faced with yearly budget cuts that translate into fewer training dollars.” In that regard, Nelson’s work, and the work of the NCWDB, has only just begun.