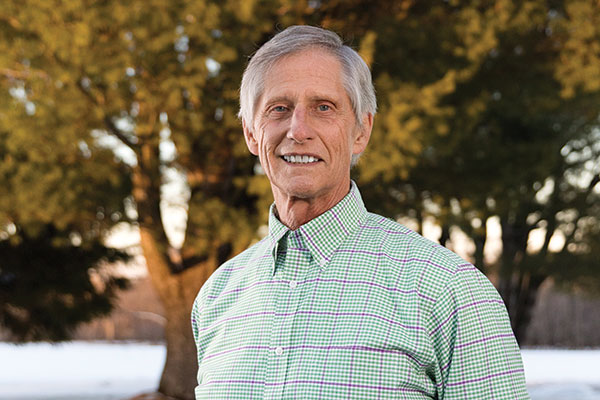 After a long and successful career in psychiatry that stretched from California to Oregon to Plattsburgh, Dr. John Schenkel began his semiretirement at the age of 70. His educational foundation is rooted in biology, but his course changed when he realized that a Ph.D. in biology was best suited to a career in academia. “I realized that I’m not a good enough politician to survive in academia,” he recalled, “so medical school was my way out.” Medical school was a great fit for Schenkel, who developed an interest in psychology and the human psyche from a young age.

After completing residency and medical school at the University of California-San Diego, Schenkel opened a private practice in Oregon. While there, he worked with Dr. John Johnson, who later moved to the Plattsburgh area and subsequently recruited Schenkel to join him in 1992. Since his move to the area Schenkel has been treating patients through numerous social service and public mental health agencies, including Behavioral Health Services North, Clinton County Mental Health and Addiction Services, and Champlain Valley Family Center.

As a semi-retired professional, Schenkel maintains a busy and quite full schedule. He recently took some time out to speak with Strictly Business about his career and passion for increasing awareness about substance abuse issues in the community.

SB: What important lessons did you learn early in your career?
JS: The very first class I took in medical school was a pathology class. The teacher got up there and said, “You forget what you hear. You remember what you see. You know what you do. And you guys, you don’t know sh*t yet.” And I have since learned that it is true. You don’t know what you’re doing until you have done it for some period of time. There is just too much information out there to get a handle on. It takes a long time to get. It took me about five years before I really felt confident that I could handle whatever situations walked in the door.

SB: What advice would you offer to someone starting his or her medical career?
JS: I don’t care what specialty area you are in; interpersonal skills are going to determine whether you are successful or not as a medical practitioner. Don’t confine yourself to just learning about the field you are in. You have to have a wide-ranging education and a large fund of knowledge, because you never know what you are going to need bring to bear on any situation. It is no surprise that people who make big contributions to a field are generally those who came from another field. They have more tools to solve problems.

SB: Why are there not enough younger psychiatrists in the pipeline?
JS: There was a phase when the field of psychiatry focused more on the biological aspects of treatment. As a result, they stopped teaching the psychological part of it in medical school, instead focusing on the biological areas. It made the field seem boring, and medical students chose other specialty areas instead. Medical schools now realize that was a big mistake and have corrected it, but the dam- age has been done. There was a long time when they could not fill psychiatric medical residencies, and that is part of why we have a shortage of psychiatrists today. It is also hard to attract students to this field because the cost of getting a medical education has skyrocketed, and you cannot make enough money as a psychiatrist to pay off your educational loans.

SB: What are you most proud of professionally?
JS: I am very good at dealing with difficult patients. Both those who are difficult to treat, and those who other professionals have found difficult to get along with. Believe it or not, the patients who are the most difficult are often the most intelligent ones.

SB: Tell us about your community involvement:
JS: I am passionate about substance abuse. In Oregon I was asked to be on the governor’s advisory committee on substance abuse, and even chaired that committee for several years. Most of my involvement in the local community has revolved around this topic. I try to give a lot of talks to groups here. I’ve spoken to groups at the hospital, the National Alliance on Mental Illness (NAMI), and participated in panel discussions.

SB: How did you get passionate about substance abuse?
JS: It came from a long history of figuring out that substance abuse was behind a lot of the problems that I was dealing with in the patients I was seeing. I discovered that if substance abuse issues were behind a patient’s problems, they would never get resolved until that part was addressed.

SB: Why do you think the substance abuse problem is growing?
JS: There is nothing new about addiction. The only thing new is that we have new drugs to play with. The drugs on the street are changing all the time, and there are some really dangerous drugs out there now. The problem is getting worse due to a whole range of things. There are more drugs out there, and they are available to people who are too young to be able to parent themselves. Adolescents, even if they know the risks, will do it anyway. Risk taking is one way of gaining social status among adolescents. They are very vulnerable to peer pressure.

SB: If you could have dinner and spend an evening with any well-known person, living or dead, who would you choose and why?
JS: I would choose Carl Jung. More than anything, Jungian psychology shaped my understanding of the psyche. It is his psychology that is the foundation for my understanding of my work. Jung had an incredible ability for insight. He wasn’t afraid of relying on subjective experience—as opposed to being limited to things that you can objectively measure and demonstrate. That was the whole problem behind the behavioral psychology movement. They rejected everything that had anything to do with subjectivity. They rejected the whole idea of emotion, and many other things. We’ve grown up some since then. Carl Jung really put the subjective world together for the profession. I still think the profession hasn’t really caught up with the subjective world as a basis for personality theory and how the psyche works.

SB: What is something no one would guess about you?
JS: There was a time when I did some stints as an actor. I discovered that I have a talent for comedic timing. I was in a few plays at UC-Davis.

SB: What do you believe the North Country community should do today to ensure a prosperous future?
JS: We need to invest more in the arts. That is what makes life interesting, and what makes a community attractive. Recently there have been some efforts to improve things. I think the Strand Theater is incredibly important. The Tibetan Festival week was very important. These efforts have mostly been led by individual people, and there hasn’t been much led by the community. With the exception of the Strand, I don’t think the community has been willing to cough up the resources that are needed to really make a difference in the arts. If the community wants to be successful in attracting people to live here whose idea of having a good time is more than going to McDonalds, then they are going to have to really invest in the arts.

SB: What do you do in your free time?
JS: I like to travel, dance, and drum. My travels have mostly been centered around going places for special dance events. Sharon and I do both English country dance and contra dance. We have been to Hawaii, Italy, England, St. Croix for dance festivals. Sharon and I started taking West African drumming lessons many years ago, and fell in love with it. I am also writing a book right now that is basically an introductory tour through the brain and the psyche. That takes up most of my free time.