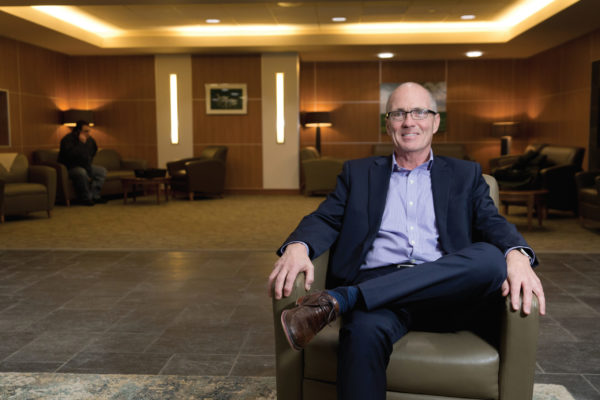 John Remillard has been a hospital president for more than
30 years and when he says he likes his work, he means it. His roots are in Peru, New York where he grew up in a family of 14 children. He studied business in college and stumbled upon the field of health care through his first job as an auditor for hospitals and nursing homes in Manhattan. “When I was in college, I never thought I would end up being a hospital president,” he recalled. “I got my first job, and suddenly, I was on a path. I’ve been fortunate and it has been a rewarding profession.”

Remillard went on to pursue graduate education in health care and landed his first role as a hospital president in Oneonta at the age of 34. The community became a second home to him, the place where he settled down and raised his family. He led Fox Hospital for 27 years before he retired in 2015 and moved back to Peru.

At the time of his return, hospitals in the region were in the middle of a massive restructuring. CVPH had merged with the UVM Health Network. Elizabethtown Community Hospital (ECH) had done the same and was positioning to merge with the former Moses Ludington Hospital in Ticonderoga. The ECH president was set to retire, potentially leaving a gap in leadership at a critical time. Remillard accepted the invitation from former CVPH President Stephens Mundy to serve as interim president of ECH.

As the adage goes, “The reward for good work is more work.” Four years ago, Remillard abandoned his plan to retire and accepted a permanent appointment to continue as president of the UVM Health Network’s Elizabethtown Community Hospital. Today his work keeps him on the road traveling between his home in Peru and facilities in Plattsburgh, Elizabethtown, Ticonderoga, and Burlington, Vermont.

We caught up with John Remillard recently in between meetings at CVPH where he shared some of his many insights with Strictly Business readers.

SB: What was the best piece of advice you ever received?
JR: Two pieces of advice have worked very well for me over the years. The first is to have an open-door policy. I think being visible is an important part of being a good leader. The other is to be a good listener. Everybody wants to be heard. Whether it is employees, patients, people in the community, or board members. I think being heard signals respect to the other person.

SB: Who was your most influential mentor?
JR: When I moved to Oneonta in 1988, I was a young and new hospital president. At that same time, SUNY Oneonta had a new president, Alan Donovan. We were both new to the area and we became friends and colleagues. We would often meet and talk about leading our organizations and what we needed to do to be successful leaders. He left me with some lasting ideas. One of them was that you really need to develop a strong relationship with your community, employees and elected officials in order to be a successful leader. I did that and it proved beneficial.

SB: How have you inspired or mentored others?
JR: I feel that it is my role to mentor my senior team. No hospital president can be successful by him or herself. They need a strong team underneath them, so that is where I have an obligation to my team members to help them grow and be successful.

SB: Tell us about your approach to leadership.
JR: To be a good leader I need to be available,visible, transparent, and communicate well and often. I have learned that you really can’t over-communicate. You need to be present, truthful, and authentic. If people think that you aren’t authentic, they will discount you as a leader. You have to figure out a way to inspire your employees, so that they can get behind the organization.

SB: What do you look for when you hire?
JR: I hire for attitude, and also whether the person is a cultural fit for the organization. That is so important. I have been burned by placing too much weight on experience and not enough on attitude in the hiring process. attitude is most important. I’ve learned that you can train people for a specific skill, but it is hard to train them to have a different attitude.

SB: How do you manage your team?
JR: I use a participatory approach. I need to build a good team, and then use the team. I try to empower my team to make decisions on their own. In fact, if they come to me with a problem, then they also have to come with at least few recommended solutions. My motto is that I need problem solvers, not just problem identifiers. That has worked well, and I have built some good teams that I am very proud of.

SB: What habits do you have that contribute to your success?
JR: I try to be prepared. Before I go to a meeting, I get background information and make sure I read ahead so that I can go in prepared.
That is important.

SB: Tell me about your greatest failure or missed opportunity in your career?
JR: Sometimes I was guilty of being quick to hire, but slow to fire. Once you determine that someone is not doing their job and is not a good fit, you should not let them hang around too long. I believe that if it ever becomes easy for a boss to get rid of someone, then they probably should not be the boss. It should always be a very hard decision. It always has been for me.

SB: What do you do in your free time?
JR: I like to run, ski, hike, and spend time with my grandkids. They live in Oneonta, and I find myself driving back there once a month to see them.

SB: If you could have dinner and spend an evening with any well-known person, living or dead, who would you choose and why?
JR: Barack Obama. I always thought he was a cool person and a great leader. In my field, he had some important achievements. When he passed the Affordable Care Act in 2010 there were 47 million people in this country who did not have health insurance. Today that number has been decreased by over 20 million. Lots of people criticize the Affordable Care Act, and I will admit that it’s not perfect. But its fundamental underpinning was to try to make sure everybody in this country can see a doctor when they need to, and that was the right goal. I commend him for trying to do that.

SB: What inspires you?
JR: In my career it is addressing challenges and making sure rural communities have health care. That’s why I like my work. What inspires me personally is seeing my children and grandchildren be happy and
successful.