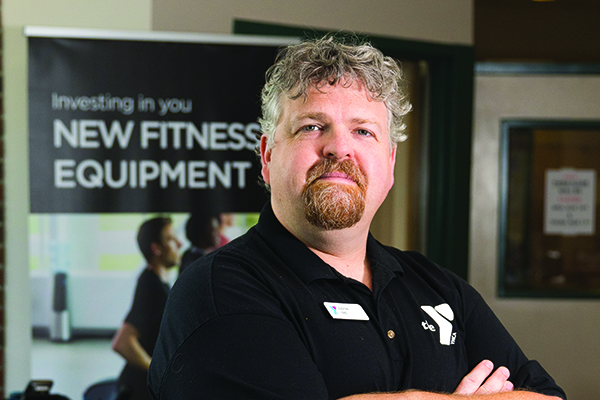 The Plattsburgh YMCA has new leadership following the milestone retirement of former director Kevin Killeen. Justin Ihne moved to Plattsburgh this winter to take the helm and begin the work of moving this pillar of the community forward. Ihne hails from Brooklyn, but also calls Kingston, New York, a second home. He grew up spending his summers at YMCA-affiliated camps in the Berkshires and Kingston, first as a camper and later as a professional. He discovered his passion for working with children through many years of positive experiences at the camps he frequented.

With a degree in music focused in ethnomusicology — simply explained as ‘world music’— it was no surprise to learn that Ihne has managed to weave music into his work. “Music has always been a part of my life,” he shared, “I introduced a lot of music programs to the summer camps that I worked at –- including some percussion and African games.” Ihne is also a collector of “funky” instruments from around the globe.

One thing led to another, and Ihne was promoted up through the ranks in the world of summer camps. He has worked for the YMCA throughout his career. Before moving to Plattsburgh with his family, Ihne was executive director of a YMCA branch in northern New Jersey.

On one of the rare hot, sweltering days this summer, Ihne pushed aside floor plans, paint swatches, and tile samples from his desk to spend time sharing his insights with Strictly Business.

You’ve been here about six months. What are your first impressions?
During my first week here, my predecessor, Kevin Killeen, brought me to a meeting of the Rotary Club. I was so impressed. I was a Rotarian in a couple of other areas that I worked in and a Kiwanian as well. So far it feels very comfortable. Everybody feels very connected. I’ve been trying to work with the library and The Strand. We have this great trifecta right here at the cross roads. All three of us are focused on kids and families so I think there’s some good opportunity there.

Tell us about one of your most influential mentors.
I was that kind of kid when I was young – the one that was always getting into trouble, with a really foul mouth, getting into fights and those kinds of things. The summer camp that I went to was a big part of what got me back on track. It was the counselors and the camp director, Lloyd Griffith, in particular. He was a great guy. He was the kind of camp director who would go out of his way to call me throughout the year and check on me. He would check in on my mom, who was a single mom, and on me and my brother. I felt like he took the time to connect with me. That’s the kind of leader that I always aspired to be; making sure that you take time to really connect with kids that are having a tough time and give them a chance. That was an important thing he did for me, giving me a chance to make mistakes and then learn from them and bring me along the way.

What important lessons did you learn early in your career?
Be okay with making a mistake. Learning from mistakes was a big thing for me, but I learned that out of mistakes come something else and you learn from that too. Coming up through the different positions I have had, it was important for me to ask my supervisor about many things so that I could learn more aspects of the business — things like trying to get a handle on finances by reviewing the budgets and learning how you go out and ask people for money and get donations. I learned how important it was to get in front of the supervisor. I wish I had done that earlier. It’s an important part of getting to the next step.

What inspires you?
Creativity. Getting in a room with a group of people and a blank dry erase board and just going to town on something creative. Taking an idea and coming up with a plan or program. When I was a counselor it was coming up with a skit that we would do in front of the kids. It was just laughing and having fun, being in that creative moment. Then one idea inspires the next, and it’s being in that mode that I love.

Tell us about your approach to management and leadership.
I’m very much about round table discussions. I’d rather get everybody around the table and say, ‘Here’s our challenge, what do you think?’ so we can all raise our ideas. Sure, a decision has to end with me, but being able to get everybody’s buy-in and understanding is key. Sometimes everyone won’t like the answer, but at least they understand how we got there. When a staff member comes in and asks what they should do about a situation, my first response is to ask them what they think they should do. It is helpful to see what they are thinking and empower them to make that choice. More often than not they are going to have a great idea that is in line with what we want to do. That’s how I try to manage and provide leadership.

What qualities do you believe are necessary for success?
Creativity, really being honest with yourself and your capabilities, and seeking out those around you who can help you get to those places. Don’t just think you are out there on your own. You have to have fun doing what you are doing and have a sense of humor about it as well. Be okay with setbacks, and be okay with mistakes as long as you can learn from them. Make sure you can delegate. Everybody falls into that trap of thinking that if they don’t do it, it’s not really going to be done the way they want it. Well, that’s okay. You’ve got to be able to let some of that stuff go. Otherwise, you’re going to drown. Community involvement is another key thing. Try to make sure that you’re seen in the community as a partner, as a player and as somebody people can go to and count on.

What are you most proud of professionally to date?
I found out very quickly after I took a position at a YMCA that wasn’t a very good model. I was there for about four years. They always had challenges. That was what everybody expected, that there would always be challenges. I don’t like to expect that, and I don’t want that to be a constant. There was an opportunity for me to put myself out of a job and start the process where that YMCA merged with another one. I started the ground work on that with the board, and then moved on to another job. I was proud and scared at the same time because you don’t know how that’s going to look. In the end, it was better for both those YMCAs to really be sustainable. I was proud of that.

What do you do in your free time?
I spend a lot of time with my kids. Playing with them gets me juiced up. We enjoy bike riding. The last few months of transition have certainly been challenging. With moving you lose a lot of family time.

What is something no one would guess about you?
I was in an opera when I was five years old. Somebody heard me screaming at my brother at a local food co-op. We were there painting a mural, and somebody must have heard my loud voice because they approached me and asked if I would like to be in an opera. I sang a song in La Boheme.

How would you like to be remembered?
The biggest thing for me is that I want to be remembered as a good father. After that, I would hope that the community felt that I helped us get stronger in some way.

What do you believe the nonprofit sector in the community can do to strengthen and grow?
I think there’s a lot of duplication of services. While some of it may be needed, there’s probably a lot more opportunity for partnerships and for people to collaborate. This will be a key focus for the YMCA because that is what we should be all about. YMCA organizations create a hub in a lot of ways for community services. There are always organizations that do things really well — and that’s fine — but there’s probably a lot of overlap and some opportunities there. That’s what I’ve been doing so far — just meeting people and asking how the YMCA can be a part of what is happening. Is there a place for that? And if not, that’s fine. But what I have found is that there are people calling us with opportunities to work together.

What is something the North Country can do today to ensure a prosperous future?
Stop acting surprised when new people choose to relocate here. Everybody always asks me, ‘Why did you come to Plattsburgh?’ Why Plattsburgh? The real question is why not this area? It has a lot to offer. It’s a growing community. Business seems to be on the up, and it’s in a cool part of the country. Since I’ve been here, everybody has been very welcoming. I think people in other places have this perception that Plattsburgh is the tundra in a wasteland and there is nothing there. You know, it’s not ‘too far’ and it’s not ‘too cold.’ I tell my friends in Connecticut that their winters are just as bad as ours. Yeah, we might get an extra snow storm, but it’s gorgeous. I love the area, and I love the feeling of community here.