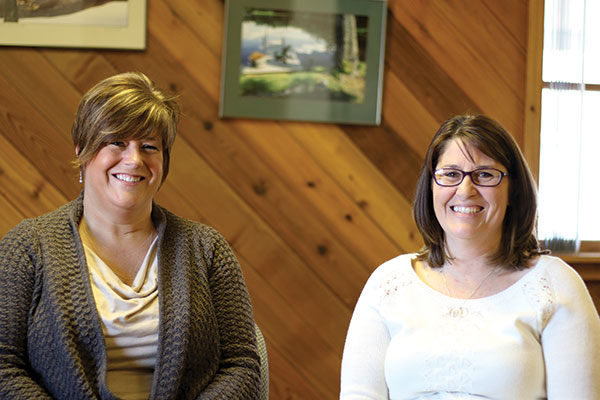 There is a man here looking for a handgun.” That’s not a statement most business owners hear everyday, but it has become the new normal for Rhonda Barber and Carrie LaDuke at X-PLO/E-Z STO located on the Military Turnpike in the Town of Plattsburgh.

New to the retail side of guns and ammo sales, LaDuke and Barber are veteran gunpowder and ammunitions brokers, having taken over the business their father, Don Jerry, began in the 1980s. The name X-PLO was fitting for the side of Jerry’s business that dealt with transporting explosives throughout the U.S. But X-PLO is also a fit to describe the tense and sometimes explosive formative years the sisters spent learning to do business their father’s way.

Whether it was doing chores on the family farm in Cadyville at the crack of dawn seven days a week or mowing lawns and weed whacking their way through summer vacation, Don Jerry made certain he taught his daughters the worth of hard work—a value they fought kicking and screaming in their youth, but now appreciate.

The women recall working long hours from the age of 14 on, with little time for slumber parties and sports. The work they put in at their father’s business was on the books, but LaDuke explained, “We never saw a paycheck. It was put away for college.”

“I would leave here in the afternoon and go to Zachary’s Pizza and work until midnight to have spending money,” noted Barber. LaDuke worked her second job at Service Merchandise where she “got to dress up and deal with customers,” not behind the scenes doing the grunt work of mowing lawns and washing trucks.

Despite long, hard hours at work as teenagers, LaDuke and Barber both went to college with athletic/academic scholarships. After four years excelling on the soccer field and in the classroom, Barber earned a Finance degree from Siena College. With job offers and a serious boyfriend in Albany, she was set on building a life and a career in the Capital District, but her father had different plans.

“I was caught in a Catch-22,” she explained. “Either I could come home and be handed everything when I’d never done anything on my own, or stay in Albany and not appreciate anything I’d been given.” Ultimately, Barber struck a deal with her father to come home. She had studied self-storage as an up-and-coming business in the Albany area in 1990, and she pitched the idea to her father — build storage units on his 800-acre property in Schuyler Falls. “He said it was never going to work, but he brought in ten 20-foot ocean containers, put them out in a row and told me if I could keep those rented he would think about putting up a building.”

Barber kept those containers rented. They now own 13 self-storage buildings; twelve on the Military Turnpike property and one in Dannemora, totaling 450 units. Barber and LaDuke also rent about 650 portable storage trailers and own a U-Haul franchise.

Like her sister, LaDuke also played four years of soccer in college and credits the discipline of athletics for getting her through school. “Growing up the way we did, we didn’t understand not having a schedule. When I went to college and had a lot of freedom, I was sleeping until noon and missing classes. The soccer coach caught up with me and said if you don’t keep up your average you can’t play. I’m very thankful I played a sport or I would never have gotten through college.”

The self-proclaimed black sheep of the family, LaDuke returned home after earning a Business degree from Cazenovia College, but refused to work for her father. Jerry wanted her to come into the family business as a receptionist. “I had a four-year degree and I wasn’t going to be a receptionist,” she said determinedly.

LaDuke worked in property management at The Development Corp. for six years under Jerry Kelly and then Adore Kurtz, running the Foreign-Trade Zone (FTZ) and Empire Zone programs with tenants like Railtech, Medisca, and Salerno (all businesses that still operate in Plattsburgh). Eventually she made a deal with her father. “When you get out of the business, I’ll come in.” So in 1999 when Jerry made the decision to retire he made one final deal with his girls.

He sold the business to them 50/50, but continues to own all the land. The sisters own the buildings and pay him rent. Jerry Family Properties stands to be theirs someday, but until then, Barber and LaDuke are content with the arrangement.

One of the first things LaDuke and Barber did after their father stepped away from the business was upgrade the technology and develop a corporate image. Instead of her father’s strictly-by-hand-bookkeeping system LaDuke changed to Peachtree accounting software. They bought themselves laptop computers and hired Media Central to help with branding.

But not everything about the transition went smoothly. “The first year was the hardest,” recalled LaDuke. “We walked in with the notion that we’d have our doors wide open and would be everybody’s friend.” Barber had the image of corporate America, where positive reinforcement would lead to shiny perks and a utopic atmosphere in the office. She freely admits now, “It was a nightmare.”

What, you might wonder, did the sisters do to right the ship and steady the course. “We became our father,” said LaDuke. “We realized that we had to be the boss and not the friend. Just like being a parent. We realize now that our dad is the most amazing person. He set us up for success.”

Aside from the all-out fistfight, desk-clearing brawls the sisters admit to having in the first decade of their partnership, the nature of their business is often volatile. A large part of the trucking business relies on contracts. “When they’re booming, we’re booming, but it’s not always reliable,” noted Barber. She and LaDuke went on to describe one of the more trying times in the business. In September 2003 a large local manufacturer was renting more than 100 storage trailers that brought in $100,000/month, but all that came to a screeching halt when they hired another company to do its trucking and storage.

In October of the same year, just three years after LaDuke and Barber had taken over the lucrative smokeless powder packaging and storage business, IMR Powder, their largest customer, sold out to Hodgden Powder in Kansas, uprooting their entire operation. That was another $40-60,000/month up in smoke. Then, on the Sunday after Thanksgiving of that year an electrical fire consumed the business’ entire maintenance shop, all of the tools and four out of the five trucks in the fleet.

What did they do? Barber said, “We just kept on trucking.” And here they are, more than a decade later, on fire in a really good way. X-PLO Firearms and Ammo, their retail gun and ammo store, has been open about 18 months. Barber said the business gives our large law enforcement population and hunters a local place to purchase guns, ammo and supplies at reasonable prices. She has big dreams of turning the small shop into an inviting lodge-like deli with rocking chairs on the front porch and a fireplace inside.

Making diversity a key component of their success, the sister’s list of business ventures continues to grow. From self-storage to portable storage, a U-Haul franchise, commercial warehousing, trucking, pick and pack, explosive brokering and storage, and now guns and ammo retail, these smart, tough women do it all.