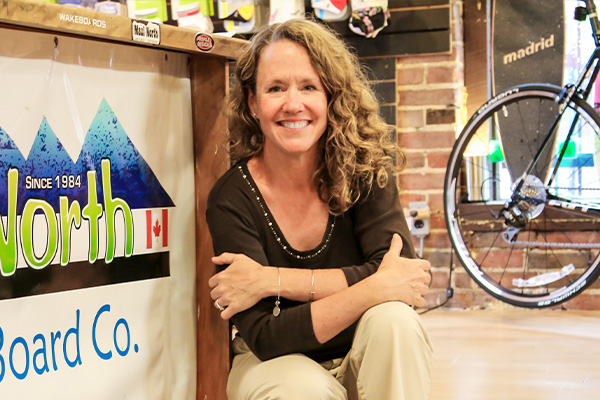 When Kim Manion talks about local business, she draws from experience on all sides of the table. She grew up in Plattsburgh in an entrepreneurial family before going off to college to study finance. Like many young people, Manion’s goal was to head to Wall Street after graduation and make a million dollars before she turned 25. The Jesuit Foundation of Boston College bent her career path a bit, inspiring her to volunteer at sites in California. She later worked at the Peace Corps headquarters in Washington D.C. where she also earned her Master’s degree in Human Resources.

During a transition between work roles, Manion took three months off to travel the world by herself. (Spoiler alert: there’s a jaw-dropping adventure story from her travels in the Q & A below that you won’t want to miss!) When she came back stateside, she landed a job in Human Resources at NCR Corporation in Dayton, Ohio. After a move to New Jersey, she answered the call to shift professional gears and move into sales through a subsidiary of NCR. “The idea of learning about data mining and helping companies leverage their data to run more efficiently was really fascinating to me,” she recalled. Unfortunately, this chapter was cut short when the dot com bubble brought massive layoffs in early 2000.

Around that same time, Manion began a relationship with her husband-to-be Dennis Manion, who had been a family friend since childhood. The couple followed Dennis’ work to New Jersey, Maryland, California, Montreal, and eventually Egypt. “We learned that we were going to move to Egypt when my daughter was three weeks old,” Manion recalled, “but we knew we wanted to end up in Plattsburgh, so we bought a house here before we left.” The couple came back in Plattsburgh in 2010 and bought Maui North Ski, Bike, and Board Company in downtown in 2013. Kim was the driving force behind its success until they sold the store in May of 2020 to allow more time for family.

With her experience in business, it was no surprise that Manion was drawn to the work of small business development. The pandemic brought tremendous unexpected complexity to small business owners, and Manion answered the call when new consultant positions in disaster management were created at the SBDC. Her experience positioned her to help usinesses gain access to the grants, funding and support that the federal government offered but only after summiting mountains of paperwork. “I bought a business, I ran a business, and I sold a business,” she explained, “And today I work with a lot of people buying and selling businesses. I can now proudly say that I have expertise in this area.”

Manion sat down with Strictly Business recently to share some of her lessons learned.

SB: What role does a “Disaster and Business Consultant” play in the community?
KM: There are similar positions all over the country that were created as a result of the pandemic. There are so many federal programs to help small businesses, like the Payroll Protection Program (PPP) and the Economic Impact Disaster Loan (EIDL). My job is to help small businesses understand them so they can access the funds and benefits that the programs offer.

SB: What important lessons did you learn early in your career?
KM: Understand who your customers are and serve them to the best of your ability. It doesn’t matter if you work in Human Resources, supporting a sales team or are the owner of a bike shop. You have to figure out what is important to your customers in order to meet their needs and become a better partner to them.

SB: Who was your most influential mentor?
KM: My mentors were my parents, who taught me to believe that gender is not a limitation. My dad actually sent me off to college with a toolbox. My parents instilled in me the belief that I could do anything. Based on my upbringing, it never dawned on me that women might be perceived as less capable than men, so that never affected me.

SB: If you could talk to your younger self, what advice would you offer her?
KM: Become an expert in something. I don’t care what you do in your career – you can have broad knowledge, but become an expert in something. When you are an expert, people will seek you out. The other thing is to know your numbers. So much of business is built on numbers. Part of what set me apart in my HR career is that I embrace numbers. I am one of the few people on the planet who can say that they love spreadsheets, and particularly in the field of HR, that made me stand out.

SB: What is something no one would guess about you?
KM: I was drugged and robbed in Kenya. I travelled around the world in my younger years. When I was 29, I took a bus by myself to meet some friends in another city, and sat next to a nice older man. We chatted for a long time, He was teaching me Swahili and I was teaching him English and he gave me a candy. I woke up in a clinic, with no passport, no money, only my bag. I was a Jane Doe. The man had offered me some candy and I thought nothing of it. There is a good reason why your parents tell you, ‘Don’t take candy from a stranger.’ That experience taught me that I am too trusting. I’ve learned a lot since then, but I still love adventure and that hasn’t stopped me from travelling.

SB: How do you think the COVID-19 pandemic will affect the future of business?
KM: I don’t think anything is going back to the way it was. This is a paradigm shift. Our supply chain was completely disrupted, so the concept of just in time inventory is no longer a good idea. People were all home – whether they were working from home or laid off – and that caused them to re-examine their priorities. As a result, many people realized that they don’t want to go back to the rat race, stuck working in an office every day. Some people do not want to go back to work at all, and extended unemployment benefits are not helping local business owners who need staff.

SB: What do you believe the North Country community should do today to ensure a prosperous future?
KM: We have to be willing to take some calculated risks. You don’t get anywhere without taking risks. We do some great things locally, but there is still some reluctance to embrace change. You can’t vet risks to death to the point where nothing happens. That is called analysis paralysis, and we need to get beyond that.